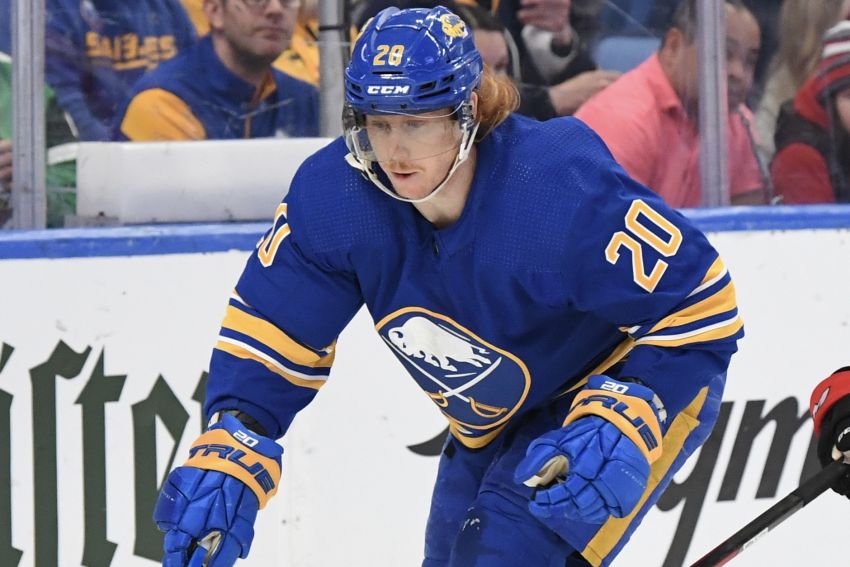 At this point, as the losses pile up – Sunday afternoon’s 4-2 setback was the Buffalo Sabres’ sixth straight in regulation – they need to find positives and signs of development within their games.

In Friday’s 5-3 loss in St. Louis, the Sabres could take some solace in the tenacity they showcased while arguably outplaying the Blues, one of the NHL’s heavyweights.

What about Sunday’s loss to the Dallas Stars at American Airlines Arena?

Well, the Sabres, as center Tage Thompson said, chased the game early, falling behind 2-0 by the 6:34 mark of the second period. They did not registered their first shot on goal until 9:53 into the game.

Yes, the Sabres got back in it a bit as the game progressed, getting goals from Thompson, his team-leading 22nd, and center Cody Eakin. They outshot the Stars 40-31 for the game, including 23-5 in the third period.

Still, fresh off Friday’s strong effort, the Sabres carried over little early, and it cost them the game. They looked weak at times against the Stars, a heavy team, losing battles that led to goals.

“It took us a while to figure out how we needed to play,” Sabres coach Don Granato said on a Zoom call. “We talked about it before the game. We couldn’t get to the game plan in the first. We did in the second and third and looked much better, played much better, but the first, obviously, took us out of the game.”

While Thompson scored and pumped eight shots on goal for the second consecutive game, Granato said his No. 1 line, which also includes and Jeff Skinner and Alex Tuch, struggled.

“The big challenge tonight was our top line,” Granato said. “They were not sharp early and competitive early. That was a big difference.”

Meanwhile, the fourth line of Eakin, Anders Bjork and John Hayden was the Sabres’ best trio.

“The Eakin line, on the flip side, who has gotten a lot of ice time, they were outstanding,” Granato said. “They were engaged immediately. You could see the contrast even in those two lines tonight was based on playing fast, competitive and hard. That showed.”

Eakin said “that’s how we should play every game.”

“Sometimes when things don’t connect or your passes are a little off, you get back to the basics and start doing that,” he said. “Get their D men turning backwards and then the plays will start opening up. I liked the way we worked and skated and shagged pucks tonight.”

The Sabres endured two six-game winless skids earlier this season in which they suffered at least one overtime loss and earned a point. During their current skid of regulation losses, they’ve been outscored a stunning 28-12.

“It’s an absolute challenge to fight off frustration, but we know as an organization, we do feel that takes organizations out of it when you start overreacting to loss or losses,” Granato said. “We just have to keep plowing ahead and keep pushing each guy to be better, and we will continue to do that.

Thompson said: “The results aren’t what we want but I feel like we’re piecing things together right now and we’ve just got to find a way to have consistency. It’s gotta be that next step for us.”

Notes: Thompson’s goal was his team-best 40th point. … Sabres goalie Craig Anderson made 27 saves. … The Sabres will practice Tuesday at home before closing their five-game road trip Wednesday against the Toronto Maple Leafs.

One thought on “Slow start dooms Sabres in loss to Stars: ‘Have to keep plowing ahead’”