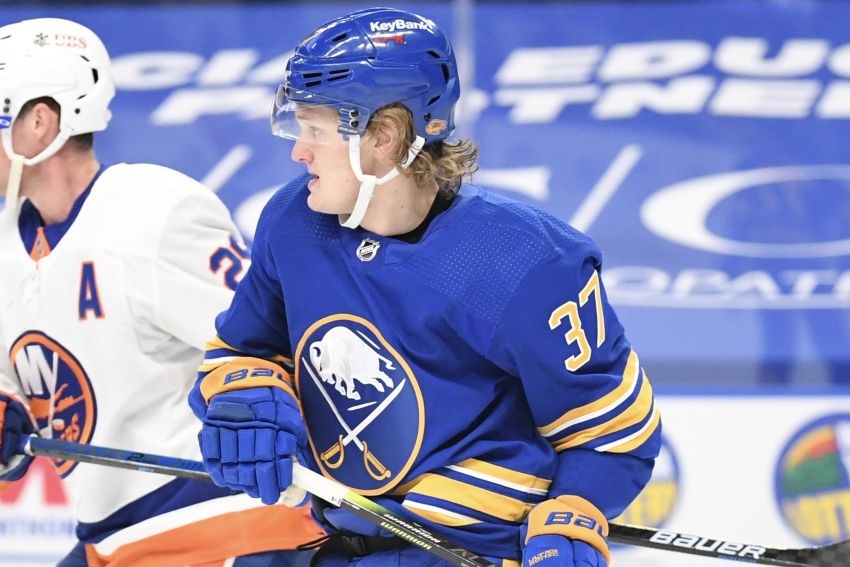 For more than 20 minutes Thursday against the heavyweight Florida Panthers, it appeared the Buffalo Sabres might pull off their biggest upset this season.

Goalie Aaron Dell, pressed into duty after Dustin Tokarski entered the NHL’s COVID-19 protocol, made some huge saves early. Winger Vinnie Hinostroza, who had two goals all season, doubled his output in less than 15 minutes, scoring twice. In between, center Dylan Cozens scored for the third straight game.

Still, the 3-0 lead hardly felt commanding against the Panthers, who have lost just one game all season at FLA Live Arena. The Sabres knew the Panthers would push back. When they did, the Sabres began unraveling.

The Sabres, who also led 4-1 in the second period and 4-3 after two periods, imploded down the stretch, losing for the sixth time in eight games (1-6-1). The Sabres have allowed at least five goals in six of those contests.

Aaron Ekblad’s power-play score, his second goal of the night, tied it at 4 1:17 into the third period. Then Anton Lundell put the Panthers up at 8:05.

“It’s just on us to go out, stop the bleeding and continue to play the way we played in the first period,” said Sabres center Casey Mittelstadt, who played for the first time since opening night. “If we play that way the whole game, we’re not going to lose very many games. Yeah, it’s on us as players. We got to push back.”

Mittelstadt, who suffered an upper-body injury Oct. 14, pushed back after the Panthers’ first goal. His goal 11:16 into the second period earned Panthers goalie Sergei Bobrovsky a seat on the bench. Spencer Knight replaced him.

Ex-Sabres center Sam Reinhart scored barely a minute later, and the Panthers did not let up the rest of the night. Reinhart recorded a career-high four points in his first appearance against his old team.

“At some point, they’re coming after us, we got to fight back,” Mittelstadt said. “Yeah, I think that’s about it, and stop the bleeding. It’s been kind of a sour spot for a lot of the year. So that’s on us as players. We got to go out and win the next shift. We just let the momentum get too far in the third.”

The Sabres have been scoring enough goals to win most games. In the last eight contests, they’ve scored at least four goals five times. But it has resulted in just one victory because their defense is so atrocious.

“Continue to focus on some details,” coach Don Granato said of how the Sabres can improve their defense. “But a lot of it is self-inflicted. We have pucks on our stick and we’re not executing and it ends up back in our zone.”

Mittelstadt, the Sabres’ No. 1 center coming out of training camp, executed well in his first game in seven weeks. Granato called his performance “extremely impressive.” In addition to scoring, Mittelstadt was a minus-3 and registered a three shots on goal in 18 minutes, 58 seconds of ice time.

“I was concerned with the amount of ice time … and Mittsy sustained it through the whole game,” Granato said. “It’s something you go in your first game in a couple of months, as a coach you’re gauging that. His conditioning was exceptional.”