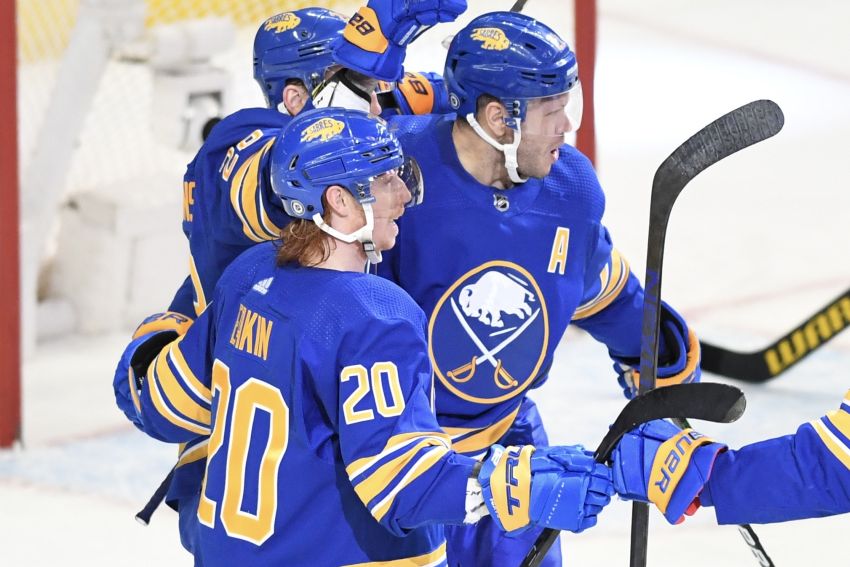 BUFFALO – There’s nothing fancy about the line. A no-frills style has made the trio of center Cody Eakin and wingers Zemgus Girgensons and Kyle Okposo highly effective since Sabres coach Don Granato recently reunited the veterans.

“We just seem to play the game the right way and do all the cliché things that you talk about, get pucks in, get pucks out and we win some battles,” Okposo said prior to Friday’s 4-3 shootout loss to the Washington Capitals at KeyBank Center. “And we’ve been able to frustrate some top lines, I think, the last few games.”

Contributions up and down the lineup have buoyed the Sabres during the three-game winning streak they carried into Friday’s contest. The checking line’s exploits rank near the top of the list.

Granato has leaned on the line heavily, using it to start games and sometimes shadow the opponent’s top talent.

He has also utilized Eakin in the dot, sending him out for the opening faceoff in overtime for four straight games. The Sabres started with the puck each time.

“There’s nothing I haven’t liked about that line,” Granato said following Wednesday’s 4-3 shootout win over the Pittsburgh Penguins. “I mean, they’ve been really good.”

Granato believes starting the game with Eakin, Girgensons and Okposo on the ice can set a tone. Ten seconds into Wednesday’s contest, for example, Granato said they quickly placed a puck where they could pressure it.

Granato reunited the line March 17 when Girgensons returned from a lower-body injury that sidelined him 18 games. The trio was a consistent presence throughout the opening weeks of the season before injuries and COVID-19 began ravaging the lineup.

“Z adds a different element to our team in general and just the way he plays,” Okposo said. “He plays so hard you know what you’re going to get. Eaks has been around a long time. He knows how to play a strong, heavy game and make some plays.

“I think the three of us just complement each other really well. I think we’re able to provide some stability for our group.”

In the second period against the Penguins, Girgensons’ dogged work down low created his first goal since Jan. 6.

“He’s just a horse,” Eakin said of Girgensons. “He flies up and down the wall, he takes everything to the net, he plays right way. He creates room in the O-zone. He can play center, he can play wing, so he does a little bit of everything. He just creates that guys are looking over their shoulders when he’s coming down on them. And if they’re not careful, he’s going to drive them back or drive them through the boards.”

Eakin began Friday’s game having won a team-high 55.9 percent of his draw. Okposo, who ranks second, was at 51.9.

“It’s something that’s a very unique skill but it’s a skill that you have to have on your team, you have to have an element of late in the game, you got 20 seconds left, if you lose a draw, the game’s probably over,” Okposo said.

He added: “That’s a skill that’s a little bit undervalued.”

“In the moment, in the game, it’s significant impact to have a guy that can consistently win draws,” Granato said. “And for us, in the evidence in the growth we need, we need those three younger centermen to grasp how important that is to become better in the faceoff circle.”

Notes: Northeastern lost 2-1 in overtime Friday to Western Michigan in the opening round of the NCAA tournament, meaning goalie prospect Devon Levi’s season is over. There is speculation the Sabres could sign him. … The Sabres scratched winger Anders Bjork (healthy) and defensemen Will Butcher (healthy) and Casey Fitzgerald (upper body). … Four ex-Sabres – defenseman Matt Irwin and forwards Marcus Johansson, Axel Jonsson-Fjallby and Conor Sheary – played for Washington.