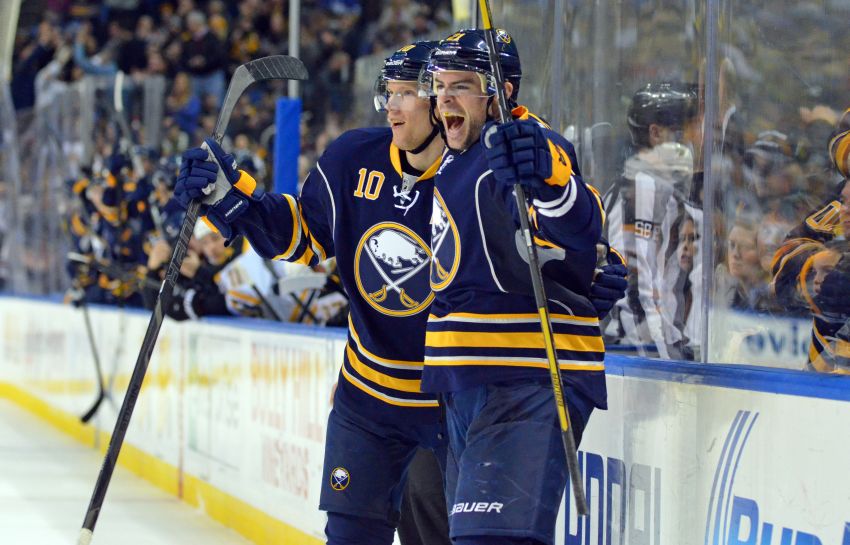 BUFFALO – Break ‘em up. Not only have the Sabres won consecutive games in regulation for the first time all season, they’ve scored eight goals while wowing crowds again inside a lively First Niagara Center.

The Sabres had eight goals in their previous seven games before starting this mini-streak.

Thursday’s 4-2 triumph versus the Boston Bruins might’ve been the best of their nine victories this trying season.

Against the class of the Eastern Conference, Drew Stafford’s nifty wraparound goal – his first score in 18 games – put the Sabres up 3-2 14:19 into the third period. Tyler Myers added some insurance at 15:39 after joining the rush, something the defenseman’s doing regularly again these days.

Is interim Sabres coach Ted Nolan proud of this win?

The Sabres even made an in-game addition, acquiring winger Linus Omark from the Edmonton Oilers for a conditional sixth-round draft pick in 2014.

Nolan said Omark will likely be joining the Sabres immediately.

The Sabres will probably have roster space. Leading scorer Cody Hodgson left the game after blocking a first-period shot and could be sidelined “a little while,” Nolan said.

“We’ll get the doctor’s report after this,” he said.

“He’s very good individually,” Enroth said. “He can pretty much do anything with the puck. He’s a guy that can really deke a guy and open up other teams’ defense.”

The Sabres, despite all their recent struggles, kept showcasing improvements. They’ve been building toward these two wins, players believe.

“I think it was easy to see we were gaining more confidence,” said Sabres forward Brian Flynn, whose short-handed breakaway goal opened the scoring at 16:27, igniting the 18,217 fans. “The only thing that wasn’t there was we weren’t scoring goals, we weren’t finishing.

“I still think we’re playing pretty similar to the span we were playing when we were still losing. But now we’re starting to get confidence.”

Stafford added: “We’ve had compete. Our battle level has been there. I feel like we’ve been in games and it just wasn’t really translating to wins. Now we’re slowly starting to get that.”

Marcus Foligno has quickly been improving this week. Fresh off scoring in Tuesday’s 4-2 against Winnipeg, the winger compiled what he believes is his first Gordie Howe hat trick – a goal, an assist and a fight – Thursday.

Foligno fought Matt Fraser early, tied the game at 2 when Jamie McBain’s shot hit him beside the net 17:11 into the second period and assisted on Myers’ goal.

“(I’m) just more confident,” said Foligno, who was benched Saturday. “I understand what’s needed from me now. It’s just up to me. It’s in my hands to do whatever I can out there.”

Stafford has been doing lots things well since Nolan took over Nov. 13. Still, it hadn’t translated to any goals before he zoomed past Matt Bartkowski down the right wing and around the net after Ville Leino fed him.

“Long time coming,” Stafford said about his first goal since Nov. 5. “I had to stick with it and sooner or later one was going to have to go in. I’m getting my shots, getting my chances, to be able to do get one there to help contribute to a win makes it even better.”

“I had a big wide open net there, I just missed the net,” Stafford said. “I had a lot of chances and a lot of shots, it just hasn’t been going in. … You’ve got to clear your head.”

The Omark pick, according to TSN’s Darren Dreger, is based on the number of NHL games he plays.

It was Pat LaFontaine’s first trade as president of hockey operations. He’s also serving as general manager until he hires one.