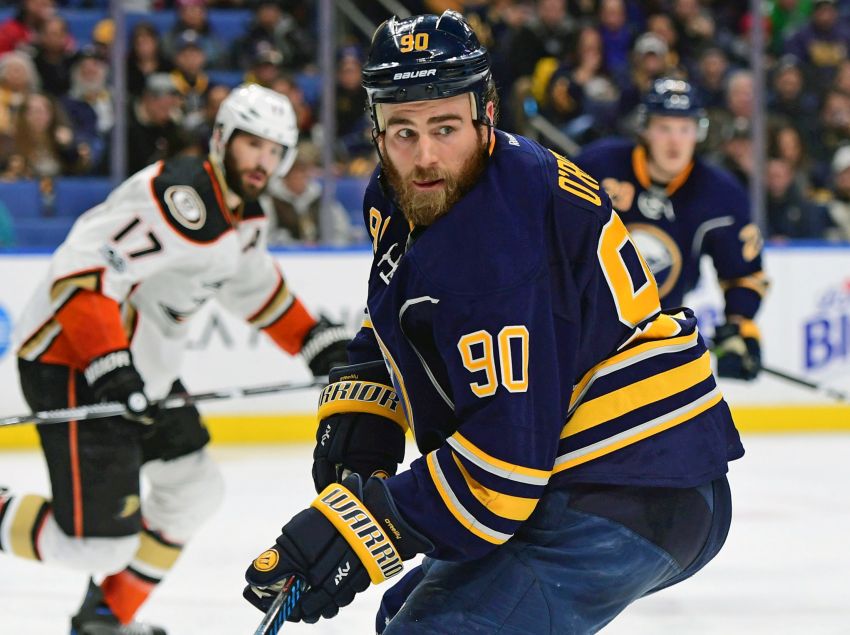 TORONTO – Even in the best times, when center Ryan O’Reilly is scoring at a torrid clip and the Buffalo Sabres are winning, the eight-year veteran is notoriously hard on himself.

So naturally, Thursday’s 5-2 loss to the Anaheim Ducks, a game in which a late four-goal implosion doomed the Sabres, didn’t sit well with him.

“It was tough sleeping last night knowing that I could’ve been a lot better and impacted the game a lot,” O’Reilly said Friday inside KeyBank Center after the Sabres prepared for tonight’s tilt against the Maple Leafs.

As the Sabres’ most valuable and versatile forward, O’Reilly skates in every situation. That’s why the team awarded him a seven-year, $52.5 million contract in 2015 – the richest in franchise history.

O’Reilly, 26, embraces the expectation he will be a difference-maker every night. He knows he must lead the charge if the seventh-place Sabres, who trail the third-place Leafs by seven points for the Atlantic Division’s final playoff spot, want to make a run.

“If we want to make the playoffs, I myself have to contribute every game for that,” said O’Reilly, who’s earning $11 million this season. “(Thursday’s game), I don’t think that was good enough. It’s frustrating, but going forward I myself have to be a lot better.”

O’Reilly, an NHL All-Star last season, struggled at times against the Ducks, who possess heavy centers in Ryan Getzlaf and Ryan Kesler. On Corey Perry’s first goal, O’Reilly and his teammates got caught out of position, giving the former 50-goal scorer open ice. O’Reilly was a minus-2 and had one assist Thursday.

“I wasn’t reading the puck very well,” O’Reilly said. “I found at times plays were there and I just weren’t making them quick enough. Sometimes it happens, but I got to do other things well. … I don’t think I defended quick enough.”

Last season, his first in Buffalo, O’Reilly was the Sabres’ MVP, scoring 21 goals and 60 points in 71 games, further establishing himself as a tenacious two-way presence.

But O’Reilly has battled injuries all season and hasn’t produced at that same level. An oblique problem cost him six games in November. He missed four games after undergoing an appendectomy on Christmas.

“He’s scratched those injuries, which he did play with for a good portion of time for the first half of the year,” Sabres coach Dan Bylsma said. “We’re all dealing with less than 100 percent health at this time. We just ask an awful lot of him. We put him on the ice for a lot of situations.”

When O’Reilly returned from the World Cup of Hockey late in training camp, Bylsma said he wanted to rely on him less. But almost four months into the season, O’Reilly has averaged 21 minutes, 39 seconds a contest, just five seconds less than 2015-16.

A dearth of healthy centers has forced Bylsma to keep utilizing O’Reilly.

“I feel great,” O’Reilly said of his health. “There’s no issue there. I’ve got to be able to put the puck in the net and play more consistent, give life when it’s needed. All I’m worried about now is Toronto. It’s a huge game.”

If the Sabres lose tonight, they’re in danger of falling out of the race.

They’re 0-2 against Toronto this season and have struggled against divisional opponents, going 7-10-3.

“Any divisional game right now is huge for us,” O’Reilly said. “They’re four-point swings. … They’re right above us. They’re a team that we can catch if we chip away.”

The Sabres will have their hands full shadowing three Leafs rookie forwards. Mitch Marner, Auston Matthews and William Nylander have combined for 53 goals and 126 points, stunning numbers in this low-scoring era.

O’Reilly will likely be charged with shutting down Matthews. The first overall pick having compiled 25 goals and 44 points, is already a dynamic presence.

“He does so many things well,” O’Reilly said. “He’s similar to a guy like Getzlaf, an elite player where you give him space, let him make plays, he’s going to get confident and he’s just going to roll.”