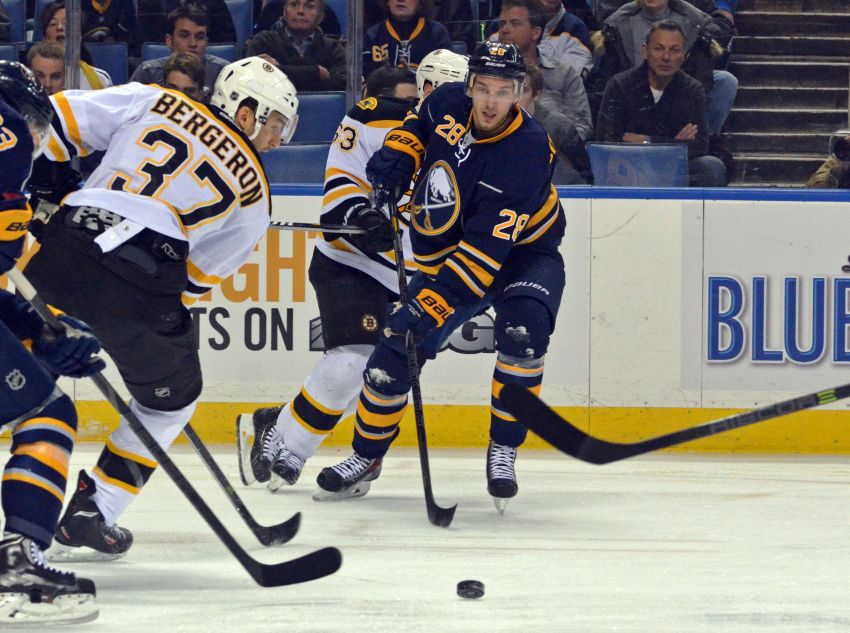 Girgensons held the puck almost eight seconds, skating from the bottom of the right circle into the left dot. The Maple Leafs’ Peter Holland began hectoring Girgensons behind the net.

Still, he couldn’t knock the 6-foot-2 Latvian winger off the puck. Girgensons skated into the circle with Holland draped on him before shooting as he fell to the ice. Moulson, who called Girgensons an “ox,” knocked the rebound in.

“He made a great play on that,” Moulson said Saturday inside the Riverside Ice Rink. “He made a bunch of extremely good plays that have ended up as goals over the last couple games. He protected the puck well. He’s kind of a bull. He’s going to get the puck to the net.”

That rapid development is one reason Girgensons, Moulson and slick center Tyler Ennis have quickly become the Sabres’ top line.

The combination, the lone one interim coach Ted Nolan has kept intact recently, has goals in the last three games entering tonight’s tilt against the Washington Capitals inside the First Niagara Center.

“I think all three of them are competing hard,” Nolan said. “I think everybody knows Ennis’ skill level. You see young Girgensons and his work ethic and Matty, the way he scores. But the one ingredient they all have is they like to compete and they like to play.”

Ennis added: “Just a good blend of grit, hard work. Matty’s a great scorer. I’m just trying to find those guys. We get along really well, too.”

Girgensons, who has three goals and seven points in 10 games this month, said the line has “a little bit of everything.”

“I give it some energy, Moulson finishes,” the 19-year-old said. “I think it’s just we kind of complete each other.”

“I don’t want to give away too many secrets,” Moulson joked. “I think, obviously, ‘Gus, with his speed, he gets in on the forecheck. He does a great job of hunting down pucks and carrying the puck through the neutral zone. Enzo, he’s great at finding those holes where he can jump through and get the puck and make plays.

“So I think my job is to kind of get out of those guys’ way, give them the puck and get open in front.”

Moulson, the left winger, has been getting open often recently. After compiling only two goals and five points over 15 games, he has three scores and six points in the last six contests. He has 13 goals and 26 points in 36 total games this season.

The 30-year-old “definitely” thinks this recent run has been his best stretch since being acquired from the New York Islanders on Oct. 27.

“I think when you mesh well together, for whatever reason that is, it’s fun to go out there and play,” Moulson said. “It’s always fun to be in a role where you’re counted on to produce. I think we’re having a good time with that.”

“He’s kind of that wily veteran, knows where to get on the ice, knows how to calm things down, knows when to pick things up,” Ennis said. “He just knows how to put the puck in the net.”

So does Ennis, who scored a nifty tying goal late in Monday’s 2-1 win against Phoenix after grabbing Girgensons’ pass and zooming to the net. Four scores in his last 10 games has him brimming with confidence following a slow start.

“I feel very good, just real confident, having fun again, playing like my old self,” Ennis said. “A lot of the credit goes to Matty and Zemgus. We’re clicking. I think we can only improve. It’s still raw. It’s still young. The line is three weeks in. But there’s a lot of optimism, and hopefully we can keep this line around for a long time.”