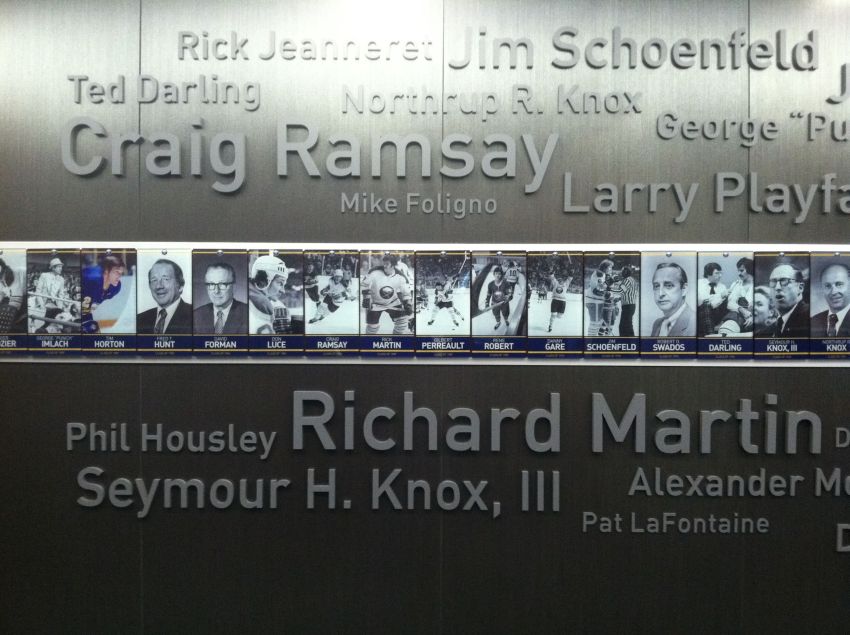 Rick Jeanneret’s induction into the Sabres’ Hall of Fame kicked off a string of honors, including today’s, the Hockey Hall of Fame’s Foster Hewitt Memorial Award. ©2012, Olean Times Herald

BUFFALO – The scene plays out just about each time Rick Jeanneret walks around in public. Inevitably, fans stop the Sabres’ legendary announcer and tell him how much they enjoy the team’s broadcast.

Then they make a short plea to the play-by-play veteran, whose enthusiasm and passionate calls have made him a local icon.

“The other thing they say is, ‘Please don’t retire,’” Jeanneret, who will be honored by the Hockey Hall of Fame on Monday in Toronto, said Friday inside the First Niagara Center. “And usually the person that says that is a guy … in February or something. He’s got this beautiful tan. And I say, ‘Where’d you get that?’ He says, ‘Well, I’m retired in Phoenix.’

Forty-one years after joining the Sabres, Jeanneret’s still going strong. He had been taking some in-season vacations during recent years, mostly when the team went on long West Coast trips. But he planned on broadcasting all 82 contests this season before the NHL lockout began claiming games.

“That was a one-shot (deal),” Jeanneret said. “I’m not guaranteeing that’s going to happen every year.”

As Jeanneret’s career winds down – he’s never said how long he’ll keep going – the appreciation for his work keeps growing.

“He’s as big a part of the team as any player that’s ever played or coach that’s ever coached,” former Sabres goalie Martin Biron said, “because he’s got a direct line to the fan every single game.”

Talk to Sabres fans, and they each have a favorite goal call or perhaps a story about frantically searching for a radio or television to hear him.

Jeanneret can’t walk down the street without being stopped.

“But that’s great,” he said. “My association with the fans in Western New York over the years has been incredible. It just continues to build every year. It’s something I’m very proud of and I treasure.”

For years, Jeanneret refused honors. Those could wait until he retired. He finally relented last season, when the Sabres inducted him into their Hall of Fame.

Why did he change his mind? He wanted his 92-year-old mother, Kay, to see him.

Now, the honors won’t stop coming. He received an honorary doctorate from Canisius College in May and was inducted into the Greater Buffalo Sports Hall of Fame last month.

However, the Hockey Hall of Fame’s Foster Hewitt Memorial Award will be “the ultimate one,” Jeanneret said.

“It’s been something I’ve been thinking about for quite some time now,” he said. “The fact of the matter is the last few months have kind of been a rush in my life. … It seems like just about every month something’s going on. …

“The nicest thing I think about it is the fact my whole family’s going to be there.”

Calling hockey games wasn’t Jeanneret’s original plan. Instead, he wanted to be a disc jockey. So he attended what he called “a cram course,” the Midwestern Broadcasting School in Chicago.

“At that point in time, I thought I was going to be a jock for the rest of my life,” he said.

One night in the 1960s, the junior Niagara Falls Flyers’ play-by-play man got sick. Jeanneret substituted, and a different career was born.

In 1971, the Sabres’ second season, WKBW began televising some games. With the late Ted Darling calling those broadcasts, they needed a radio voice.

Fred Hunt, the team’s assistant general manager, called Paul Wieland, who was in charge of broadcasting.

“He said, ‘Listen to this guy,’” recalled Wieland, now a professor at St. Bonaventure University.

Wieland, who had heard some of Jeanneret’s Niagara Falls broadcasts, called him. He thought Jeanneret “had good pipes,” a unique style and anticipated the game well on radio or television.

“He was delighted to do it,” Wieland said.

Jeanneret’s been in an NHL booth ever since.

But thousands of games later, Jeanneret refuses to be called the “Voice of the Sabres.” That honor, he believes, belongs to Darling, his close friend and the team’s first play-by-play announcer.

The two “got along marvelously” together, Jeanneret said. Darling died in 1996, two years after receiving the Hewitt Award.

“I just feel that from Day One he was the ‘Voice of the Sabres,’” Jeanneret said. “I have no problem whatsoever being described as the Buffalo Sabres’ play-by-play announcer. He was the original voice of the Sabres. He was taken from us far too early, and I would like that go with him to his grave.”

Their styles differed greatly. Darling ranks among the smoothest hockey broadcasters ever. Jeanneret, meanwhile, has always possessed a wild delivery.

“Good Lord, there’s a big difference between Ted Darling’s play-by-play and mine,” Jeanneret said. “Mine’s way off the wall.”

With so many to choose from, it’s hard for fans to pick just one Jeanneret call as their favorite.

There was “LalalalalalaFontaine” following a Pat LaFontaine goal, “Woweee Housley” for Phil Housley and Alexander Mogilny was the “Red Hot Russian.”

“Now do you believe?” was popular as the Sabres morphed into an elite club following the 2005 lockout, as was, “These guys are scary good!”

But based on some informal polling, Jeanneret has two signatures calls.

The “May Day!” goal following Brad May’s 1993 overtime series clincher against Boston inside Memorial Auditorium might be his most famous and replayed ever. Clips on Youtube.com have hundreds of thousands of hits.

“Top shelf, where mama hides the cookies!” – a staple to this day – could be the recurring favorite.

“I think the May Day goal is the best that I’ve ever heard,” Biron said. “(It’s) probably one of the best hockey or sport goals of all-time, just because … of the scenario. It was overtime, so it’s not like you’re preparing to make a call; it just happens.

“It was the ringtone on my phone for a while when I was here in Buffalo.”

Jeanneret said the “cookies” call has stuck the most.

“It’s the youngsters I hear using it all the time in Tops or Wegmans or something like that,” he said. “ … If anything’s going to be a favorite, it’s because of the association with the younger generation.”

“Rene Robert, and the Sabres win it again in overtime!” Jeanneret cried.

“It’s my favorite because it was a historic goal for the Sabres, and the way he called it was real perfect,” Wieland said. “He didn’t go over the top.”

Of course, there’s more to Jeanneret than hollering. He calls a clean game focused on the ice.

Hockey play-by-play is evolving into storytelling, Biron said. NBC, for example, has its broadcasters talk over the action.

“RJ has kept his play-by-play a play-by-play,” Biron said. “I love watching a game when he’s calling it. I could be sitting in the living room watching it, or I can get up to go get something to drink, and I still know what’s going on just by listening to his voice. …

“He’s kept what makes him unique, and I think that’s one of the reasons why he’s been so popular here in Buffalo.”

What else endears Jeanneret to Sabres supporters? The everyman status he carries. Viewers and listeners feel like they’re experiencing the game beside a friendly, knowledgeable fan.

“I think he comes off as a guy you’d like to have a beer with, as I’ve had several thousand beers with him,” Wieland said. “He’s genuinely a raconteur of hockey. I mean, he’s a really bright guy. … I think the way he approaches things on the air you can tell he’s pretty damn smart. …