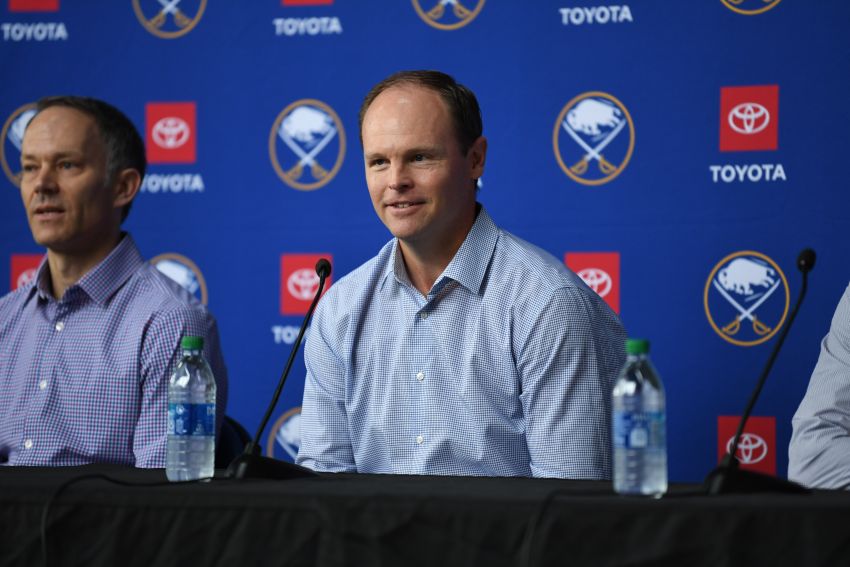 Adams, who won the Stanley Cup as a player in 2006, had never worked in a hockey department when they hired the Clarence native on June 16, 2020.

But the Pegulas, having worked closely with Adams in other areas of their organization, felt strongly about his talents and leadership qualities. They wanted to utilize his communication skills after feeling a disconnect with ex-GM Jason Botterill.

It was a bold move and, so far, Adams has rewarded the Pegulas’ faith, as the Sabres, following a decade of futility, finished last season on a 16-9-3 run, their most significant stretch in years.

On Wednesday, shortly after players reported for their training camp physicals, the Sabres announced Adams, 47, has signed a multi-year contract extension. No other details were revealed.

After a rocky start – the Sabres finished dead last in 2020-21 – Adams has grown more comfortable in the job, bringing much-needed passion and stability while rebuilding a team that hasn’t made the playoff since 2011.

“Kevyn’s leadership and vision over the past two seasons has proven to be invaluable, and I am confident in his ability to continue to move us forward as an organization,” Terry Pegula said in a statement. “He is respected by players, coaches, staff, and peers around the league alike due to the poise with which he carries himself and the respect he reciprocates to every individual he encounters. He has grown in different roles throughout the organization, providing him unique perspectives that help him perform at the highest level as general manager.

“I, along with the fans and community, am happy to see Kevyn continue to build a winning culture both on and off the ice. Additionally, I am appreciative of his communication skills and dedication to the entire organization. I am thrilled to extend Kevyn’s contract and have him lead the Buffalo Sabres for several years to come.”

Adams, a first-round pick by the Boston Bruins in 1993, played 540 NHL games as a forward with six teams over parts of 10 seasons. He enjoyed a career year with the Carolina Hurricanes in 2005-06, scoring 15 goals and winning the Cup.

Following his retirement in 2008, he earned a master’s degree and worked as a development and assistant coach for the Sabres under Lindy Ruff and Ron Rolston.

After being let go in 2013, the Pegulas hired him to run the new Academy of Hockey at LECOM Harborcenter and the Jr. Sabres. They promoted him to general manager of Harborcenter in early 2019 and the Sabres’ executive vice president of business administration in later that year.

Adams is scheduled to talk to the media Thursday morning.