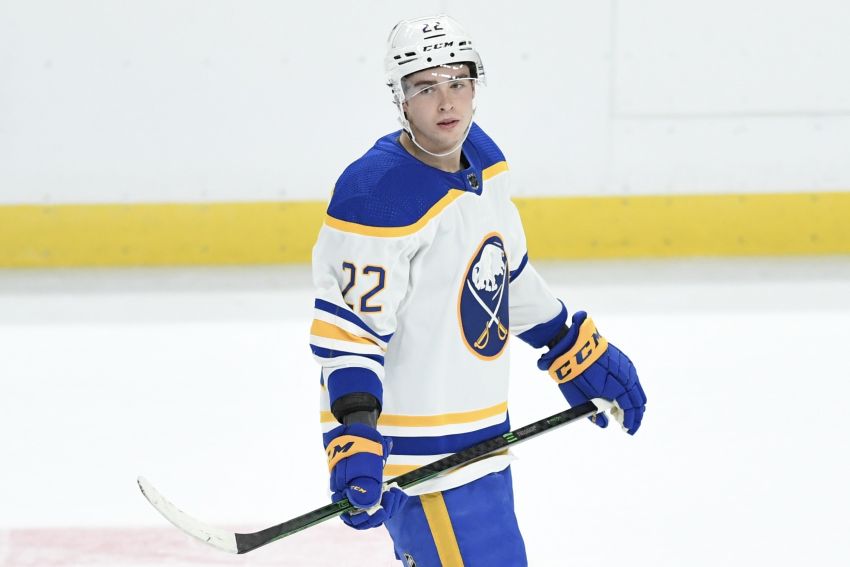 Jack Quinn could have a spot in Buffalo this season. ©2022, Micheline Veluvolu

BUFFALO – What makes this training camp so unique for the Sabres, besides the fact they’re, you know, relevant again, is the lack of roster competition.

Right now, with the Sabres set to hold their first on-ice sessions today at KeyBank Center, their lineup looks set.

Sure, some guys will be moved around. There will inevitably be injuries. And they could feel compelled to keep one of their talented youngsters if he wows them.

But the Sabres, who have 59 players listed on their camp roster, likely know the 23 they will keep for their Oct. 13 season opener against the Ottawa Senators.

Following some early stumbles, general manager Kevyn Adams has brought the Sabres what his predecessors couldn’t: stability and a clear vision by rebuilding the team through the draft and trades for young talent.

So far, Adams, who signed a multi-year contract extension on Wednesday, has shown he won’t take any shortcuts. Even after the Sabres finished last season on a 16-9-3 run, their most significant stretch in years, he refused to chase expensive free agents or acquire veterans who might offer short-term success.

He wants to see his plan through with the youngsters.

Adams has jettisoned the disgruntled players and acquired ones he believes want to be in Buffalo. It’s no coincidence last year’s group quickly grew close without much of the old guard around.

How excited is the current team for the new season? More than 30 players arrived in town long before they had to report Wednesday for physicals.

After sessions at 10 a.m. and 1 p.m. today and Friday, the Sabres will scrimmage Saturday at LECOM Harborcenter. They play their first preseason game Sunday afternoon in Washington against the Capitals.

Another season – one with actual expectations – has arrived.

Can Jack Quinn and JJ Peterka crack the lineup?

Adams has acquired about one-third of the players expected to comprise the opening night roster, including Peterka and Quinn, his first two draft picks after he took over in 2020.

The wingers are penciled in to be regulars this season after dominating the AHL as rookies and each playing their first two NHL games last year.

Peterka, 20, compiled 28 goals and a team-leading 68 points in 70 regular-season games for the Rochester Americans and another seven goals and 12 points in 10 playoff outings.

Meanwhile, Quinn, 21, registered 26 goals and 61 points in just 45 contests, gaudy numbers that earned AHL Rookie of the Year honors. He managed just two assists in the postseason, although he performed better than his numbers might indicate.

After just one full season in the minors, they both look ready for the big leagues. Still, the Sabres won’t simply award the prospects a spot.

The team has finally built up scoring depth, so Peterka and Quinn probably need to earn a spot on the top three lines. They’re not going to keep them around to play short minutes on the fourth trio.

Given his age (41), recent injury history (35 games missed last season) and the presence of newcomer Erie Comrie, it’s possible Craig Anderson will slide into a backup role this season.

Anderson seemed to strongly be considering retirement before signing a one-year, $1.5 million contract to return for his second season with the Sabres.

Comrie, 27, has never started regularly in the NHL, playing just 28 games over parts of six seasons, including a career-high 19 with the Winnipeg Jets last year.

So while the Sabres likely expect Comrie, who signed a two-year, $3.6 million contract, to be the No. 1 netminder, he’s a bit of a question mark.

Perhaps Anderson and Comrie will split time early in the season.

After stripping Jack Eichel of the captaincy last season, the Sabres did not award it to anyone, choosing instead to have veterans Zemgus Girgensons, 28, and Kyle Okposo, 34, serve as alternates.

In the coming weeks, however, Sabres coach Don Granato will likely name a captain, and they have no shortage of intriguing candidates.

Okposo, given his experience and the respect for him in the dressing room, might be the leading candidate. If Granato wants someone younger, center Dylan Cozens, 21, defenseman Rasmus Dahlin, 22, and winger Alex Tuch, 26, have shown passion for playing in Buffalo and a strong desire to create a new culture.