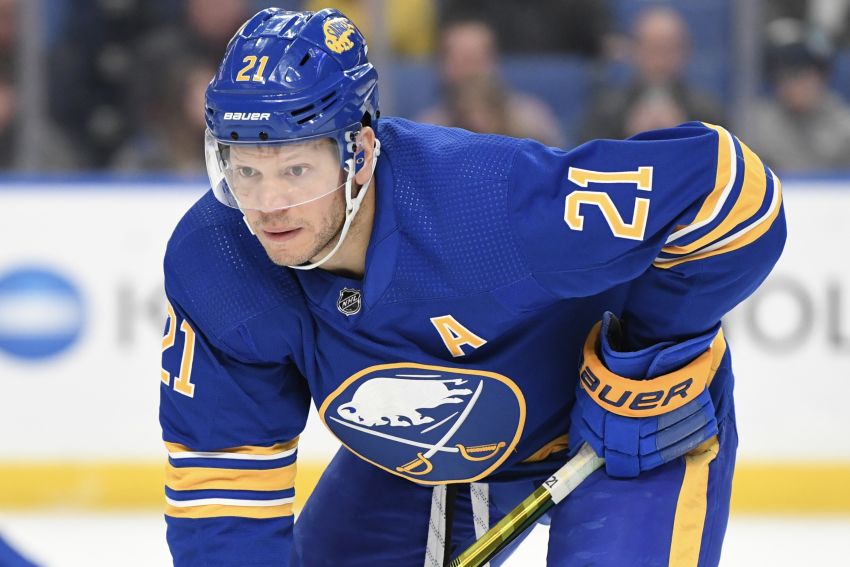 Kyle Okposo might be Buffalo’s leading candidate to be named captain. ©2022, Micheline Veluvolu

BUFFALO – For just the second time in their history last season, the Sabres did not name a captain.

Instead, having undertaken another rebuild, they named Zemgus Girgensons and Kyle Okposo, their two longest-tenured players, as alternates. The move worked, and the veterans helped the team establish a fresh culture after Jack Eichel was stripped of the captaincy.

This year, however, with the roster stabilized, general manager Kevyn Adams said the Sabres plan to name a new captain before the season.

“We talked a lot about it during the offseason,” Adams said Thursday morning prior to the team’s first sessions of training camp. “That’s something we’re still going to spend a little bit of time on in the next week or two. But we’ll have that before the regular season, our leadership group.”

Girgensons, 28, and Okposo, 34, and goalie Craig Anderson, 41, played a major role in the Sabres’ revitalization last season. Players would often talk about the tightness of the group and how everyone could simply be themselves.

“We want to create an environment where the guys can come in and be themselves every day, and whether that’s a rookie or that’s a veteran, they get to be who they are,” Adams said inside KeyBank Center. “And I think when you do that, then you’re giving a chance for the players to be the best version of themselves. And some guys are quiet, some guys are loud, some guys lead by example, some guys are always talking.”

Sabres coach Don Granato said Girgensons, Okposo and Anderson “have a deep care for helping some other guy achieve more.”

“They don’t fear that this guy might replace me, which is very uncommon, whether that is an unconscious thought, or a subconscious thought,” Granato said. “Sometimes it’s hard for the older players to really, really help a guy who might replace them or take some ice time away from them. And those three guys there, they love it. We’ve tried to empower them to that end, and they’ve embraced it.”

Okposo, the Sabres’ most experienced player, might be the leading candidate to be named captain. If the Sabres want a younger option, defenseman Rasmus Dahlin, 22, and winger Alex Tuch, 26, have established themselves as passionate leaders.

If they want to spread out the leadership, perhaps they will name four alternates. Only two players, however, can wear an ‘A’ each game.

“We have a lot of guys in that room that are becoming leaders and better leaders everywhere,” Granato said. “We want to make sure we clear the way, that that process keeps happening. Those players, that maybe not just necessarily who our captain is, but a whole next group of guys are coming.”

When Sabres owner Terry Pegula hired Adams in 2020, he cited a disconnect with former GM Jason Botterill and Adams’ communication skills as one reason for the move.

In awarding Adams a multi-year extension Wednesday, Pegula noted he was “appreciative of his communication skills and dedication to the entire organization.”

“Communication and to ownership is something that is every day,” Adams said. “I’m talking every day. Communication, if you take it down to the team within our locker room and the coaching staff, is so critical to how we’re going to build this together. And I feel like sitting and having breakfast or having a coffee and just talking to our players about their families or what they did in the offseason in just being myself and just making sure that people understand what the vision is and how we’re going to do this together.

“Doing that every day and being consistent, that’s just me being myself and just not trying to be something I’m not. So that’s another piece.”

Adams said on the day he took over as GM, he tried to “take down any walls that there were within the hockey department toward the other parts of the organization.”

“We will not get to where we need to be without the marketing department and community relations, and finance and operations,” he said. “I mean, there’s just so many – ticketing – so much that goes on day to day. And those people have to, one, feel valued in what they do by the hockey department and the players. Two, they have to be supported. They have hard jobs. They need to understand what the vision is here so they can execute their jobs.”

Granato said center Sean Malone, a West Seneca native, is working his way back from an undisclosed injury and has started skating again.