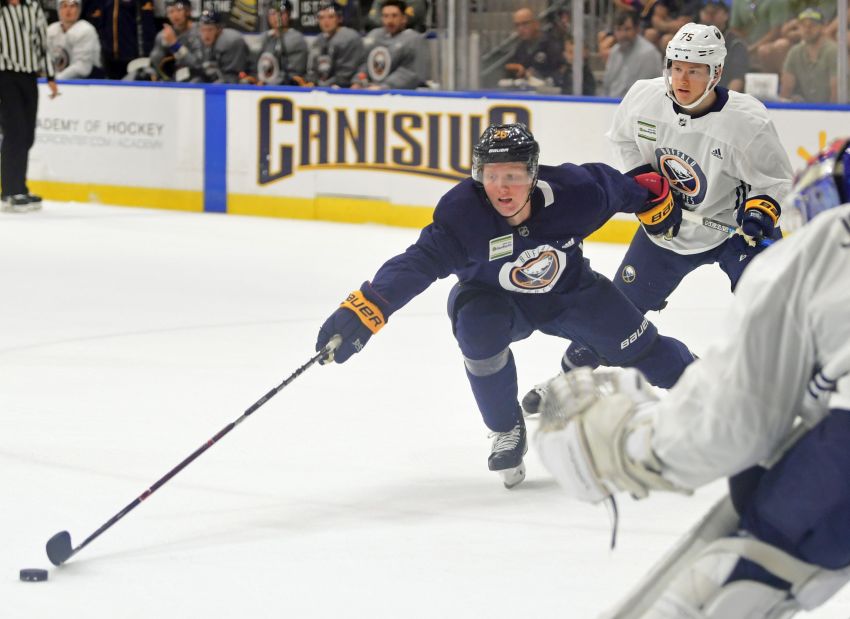 BUFFALO – With so many shiny prospects gathered together, development camp can make an NHL team’s future look brighter than the reality.

Optimism often runs rampant during the summer. When a first-round pick or two wows you up close, it’s easy to get a little more excited.

Right now, the enthusiasm for the Sabres is understandable.

But it was Dahlin’s highly anticipated arrival that lifted the spirits of an organization still reeling after finishing dead last in 2017-18.

“It was inspiring, very inspiring,” Sabres assistant general manager Randy Sexton said of seeing Dahlin on the ice. “He’s a special player and he’s a special person. That’s why we were all so fortunate to have him with us. Our fans are going to see him play for a long time to come. I don’t have a better word than special.”

Sabres coach Phil Housley said: “To get a player we got, it’s really important for our city and Western New York. It gives a little hope that we get a first pick overall.”

Dahlin’s presence made camp crowds swell to more than 1,000 each day inside HarborCenter. Many fans already sported No. 26 Dahlin jerseys, which sell for more than $200 each. They cheered when he scored in practice.

Dahlin seemed overwhelmed by it all.

“I’m just so impressed by all the fans,” he said. “It’s been amazing to be out on the ice, even in the (practices) they’re full. I’m super impressed. I can’t wait to see all the fans in (KeyBank Center) when the games start. Yeah, it’s been amazing, they’re great.

“They’ve had my jersey on. That feels crazy, too. It’s been awesome to be here.”

Suddenly, with Dahlin in the fold, the Sabres look a lot better. That’s why the next few days or even weeks will be so interesting.

When free agency opens at noon today, the Sabres will probably add at least a few players, including a starting goalie, most likely career backup Carter Hutton.

The Sabres, of course, have other holes to fill. Most notably, they must find scoring, speed and add depth everywhere.

Since the free agent market is so weak, perhaps GM Jason Botterill will address some of the Sabres’ needs through trades.

In Ryan O’Reilly, Botterill holds perhaps the most sought-after asset on the trade market. Rumors are still swirling he could be dished.

One of the league’s most versatile centers would fetch a nice return. Still, trading O’Reilly would leave a massive void in the lineup. None of the pieces dealt back would likely be able to replace him.

Housley skated O’Reilly almost 21 minutes a game last season, utilizing him in every situation. O’Reilly even set a record for most faceoffs won.

If the Sabres, who must pay O’Reilly a $7.5 million bonus today, are serious about winning next season, it’s hard to imagine them trading him.

“I just let Jason handle that,” Housley said when how he deals with the rumors regarding O’Reilly’s future. “That’s his priority. He’s going to deal with that tomorrow and next week.”

Whatever happens with O’Reilly, Housley will still have Dahlin. Whether he’s talking or tweeting, he hasn’t hidden his excitement about what Dahlin’s talents could do for the Sabres.

“Oh, I’m excited just like anybody else just to try to change the direction of this organization,” Housley said. “It was a big moment for our franchise that we were able to get the No. 1 pick, just welcome him to our organization. I’m excited.”

He added: “You look at his path, the week at the draft, the tremendous amount of pressure that goes with that, it’s almost like a breath of fresh air. He’s getting comfortable with his new teammates, and that’s what I like (that) Rasmus brought.”