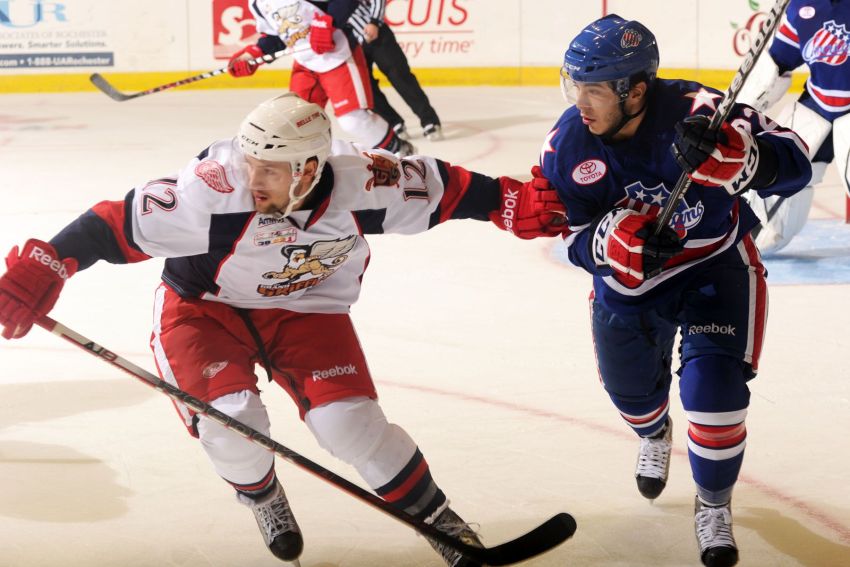 ROCHESTER – It was a life-changing decision. In September, Phil Varone impressed the Buffalo Sabres, so the club offered an AHL contract following his training camp tryout. But Varone was also strongly considering attending the University of New Brunswick.

“It was 50-50,” Varone said Friday inside the Blue Cross War Memorial following the Rochester Amercans’ 5-1 win over the Syracuse Crunch.

Varone, a scoring star with the Ontario Hockey League’s Erie Otters, went home and discussed his future with his parents.

“I talked to my dad about it,” the 21-year-old said. “He said, ‘You know what? I think you should do it. This opportunity might not come up again.’ So I took a chance.”

The Sabres inked Varone, who went unsigned after San Jose selected him 147th overall in 2009, to a two-way contract in March.

“That was my goal after I got an AHL contract to kind of work to that,” Varone said.

Without Varone, it’s likely the Amerks, who start their first-round Western Conference quarterfinal series tonight against the Marlies in Toronto, would’ve missed the playoffs.

The prospect credits Amerks coach Ron Rolston and his tenacity for his success.

“He gave me an opportunity, and I kind of ran with it,” Varone said.  “Just hard work, I guess, having good patience, a good attitude. Guys who work hard, it usually works out for them.”

“He works so hard, you knew that he was going to be where he was because he scored a lot of points in junior hockey,” Rolston said. “ … He works on his game a lot. He’s just built over the course of the year, and his confidence came along with it. Now he’s the player he is for us.”

What kind of player is Varone?

“Just a guy that can play in all situations, last minute of the game if we’re up a goal and down a goal,” he said. “I’m more of a passer than a goal scorer, but I believe I can score as well.”

Varone, who’s listed at 5-foot-10 and 186 pounds, called getting passed on by the Sharks a “letdown.”

“I couldn’t tell you why (they passed),” Varone said. “(I) had two shoulder surgeries while I was drafted for them. Maybe it was just because of my size. Maybe they just thought I was injury-prone. But I haven’t missed a game – knock on wood – in the last two years, so I think I’m kind of over that.”

Varone, the only Amerk to play all 76 games, dazzled as an overage OHL player last season, scoring 33 goals and 81 points in only 55 contests. That helped him land a spot in Buffalo’s summer developmental camp and later training camp.

Right now, Varone said he’s “just going with the flow.” He isn’t thinking much about his whirlwind season.

“It’s just all happening at once,” he said. “Maybe this summer I’ll be able to take it in a bit more.”

In his second full AHL season, Williamsville native David Leggio has become the Amerks’ No. 1 goalie, posting some terrific numbers – 28 wins, a 2.63 goals-against average and a .917 save percentage in 54 games – that earned him team MVP honors.

With a strong season as a starter, Leggio, who went undrafted and spent time in the ECHL and Finland before signing with the Sabres, is starting to get himself on the NHL radar.

Playing so close to home has been a special experience.

“It has been awesome. … I’ve had a ton of people there all year,” the 28-year-old said. “Close friends that have season tickets, family coming pretty much every game. It’s been awesome. … It’s been a different experience, the first time in my career I’ve been able to have that kind of luxury. I’ve really enjoyed it.”

Sabres prospect Kevin Sundher, the 75th overall pick in 2010, has joined the Amerks with his Western Hockey League season over. The 20-year-old center had 26 goals and 75 points in 68 games this season. He’s not expected to play right away.