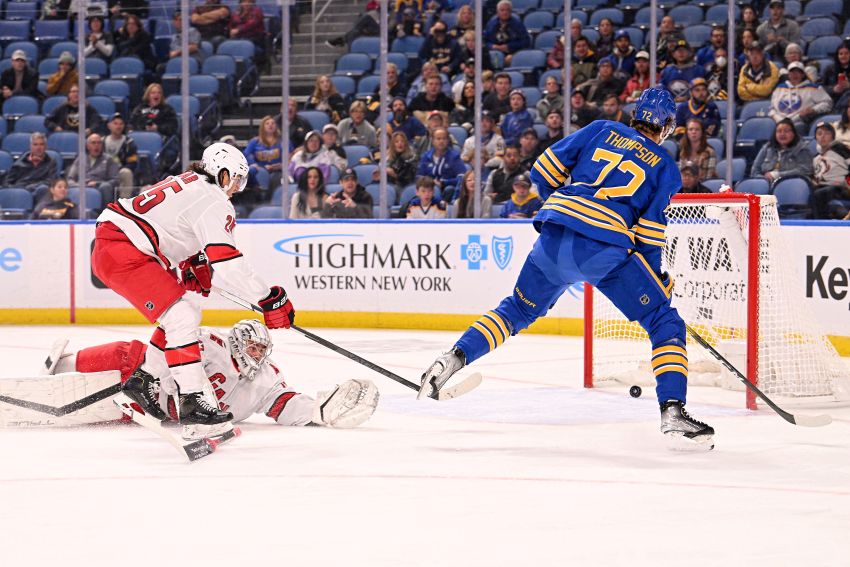 In fighting Chatfield 15:41 into the game, Thompson quickly completed a Gordie Howe hat trick – he scored a goal and recorded an assist earlier in the period – and further illustrated the tight-knit group the Sabres have become.

Thompson, the Sabres’ top offensive threat, scored 38 goals last season and just signed a seven-year, $50 million contract extension. Still, he did not hesitate to drop the gloves and defend a teammate in an exhibition game.

“It was awesome,” Hinostroza said of Thompson coming to his defense. “I think it just speaks on our team. Everyone on this team would do that for each other. Yeah, I didn’t see that guy coming, big hit, and Tommer jumps right in and fights him. That just speaks volumes of the character he has as a teammate and the character we have in this room, because I really feel like any guy is going to do that for each other.”

Sabres coach Don Granato acknowledged he was a little concerned watching his No. 1 center throw punches.

“Just get through this without getting injured yourself,” he said. “But it’s obviously a testament to how these guys feel about each other and what they believe they are capable of potentially accomplishing on a nightly basis. Because you fight for what you love. …

“I don’t like seeing Tage in there, but I think it’s a good, good sign and I would suspect many guys would follow suit on that even though there was absolutely no hesitation.”

Thompson, who scored on breakaway at 10:52 after assisting on Hinostroza’s goal at 6:59, earned an instigating penalty and a 10-minute misconduct in addition to the fighting major.

“You don’t want to see a hit like that, especially in preseason, maybe taken a little advantage of there,” he said. “Just trying to step in and stand up for him.”

A Sabres lineup that could resemble their opening night roster throttled the Hurricanes early inside KeyBank Center, opening up a 3-0 lead when center Dylan Cozens scored a short-handed goal 18:16 into the contest. It took the Hurricanes nearly nine minutes to record their first shot.

The Sabres did not, however, escape their fourth preseason win in five tries unscathed. Granato said said an upper-body injury forced winger Kyle Okposo to leave the game late in the second period. Okposo, who has a history of concussions, doesn’t have a head injury.

“It is going to be a shorter-term injury, but he will not skate the next few days until we see how he responds, I guess,” Granato said. “But it won’t be long-term.”

The Hurricanes, who mostly dressed AHL players, got back in the game late, getting third-period goals from Jamieson Rees and Malte Stromwall before winger JJ Peterka’s empty-net score.

Granato said it’s only natural that Peterka, 20, might be pressing as he battles to earn a roster spot out of training camp.

So far, the slick prospect has had an underwhelming preseason, registering just one assist in three outings before Tuesday’s goal.

“I would love to score a little bit more right now,” Peterka said prior to Tuesday’s game. “But for me, it’s just trying to find my game and getting the rhythm back.”

In the NHL, of course, the German rookie can’t get by on skill alone. He learned the same lesson last season with the Rochester Americans. After a slow start, he ended up registering 35 goals and 80 points in 80outings, playoffs included.

Peterka matured rapidly, focusing on details and playing a tighter game. That dynamic rookie campaign raised expectations he would crack the big club this year.

“We want to get him playing on instinct, but obviously before he can do that and get more rope, he has to learn, ‘OK, what areas am I really responsible for?’ Granato said Monday. “I think he’s more aware of that, knowing he had to learn a lot of that in Rochester last year and stop and pay attention to details he never had to at previous levels.

Peterka played 11 minutes, 53 seconds against the Hurricanes, the lowest of any forward other than Okposo. He mostly skated at right wing beside Cozens and Peyton Krebs.

Notes: Sabres goalie Craig Anderson made 23 saves while going the distance for the first time this preseason. … Granato said center Sean Malone, who returned from a lower-body injury last week, is day to day. The West Seneca native has missed the last two days of practice. … Hinostroza played right wing beside Thompson and Jeff Skinner.