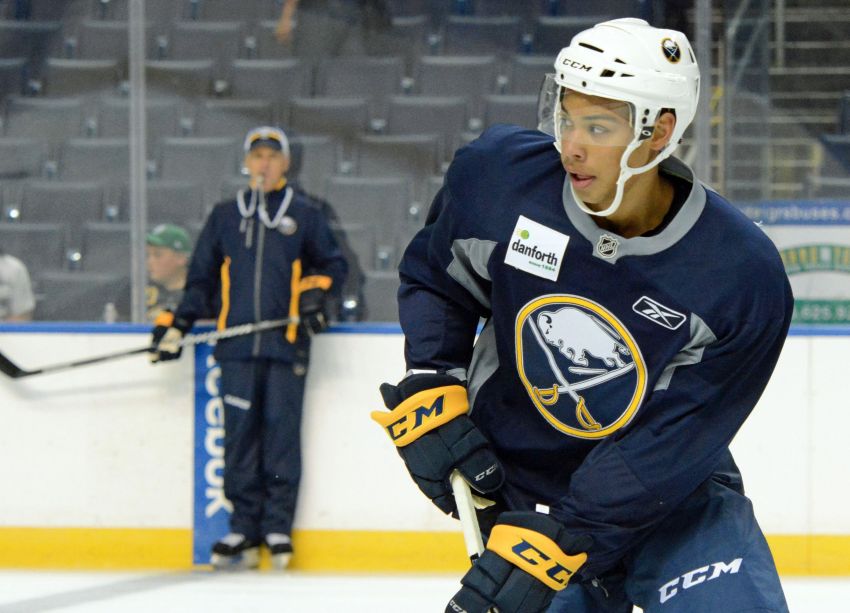 New Sabres assistant Dan Lambert, Stephens’ junior coach with the Kelowna Rockets, was on the ice putting the youngsters through drills. Meanwhile, Sabres coach Dan Bylsma, who had just hired Lambert, his friend, was up in the stands watching.

“He’s been around so long that was really intriguing to him,” Rockets assistant coach Kris Mallette said about Bylsma.

That’s why when the Sabres drafted Stephens in the fifth round, 155th overall, on June 27, Bylsma fist-pumped at the draft table. He believes the 18-year-old will play in the NHL someday.

What did Stephens learn about Bylsma during their short time together?

Stephens quickly developed into perhaps Kelowna’s biggest surprise during its run to the WHL championship. A year after a broken leg limited him to only 22 games, he started his rookie season getting scratched regularly.

“He was kind of an unknown coming into camp this year,” said Mallette, who’s in charge of the Rockets’ defensemen.

Stephens added: “I just had to get back to where I was. It was just a slow start for me. But once I got going, once I found my stride it was good.”

The Rockets couldn’t yank Stephens out once he got in. He quickly carved out regular duty, skating around 16 or 18 minutes a game as one of their top defensemen.

“The thing was he played beyond his years, I thought, and it was really tough to take him out,” Mallette said. “He basically had played himself into a position where we made room and actually moved a defenseman up to a forward because we had trust in him to play.

“It was just a matter of really listening to little things that we were trying to tell him and the fact that he did play a simple game. The biggest thing for him when he had confidence and was carrying the puck, he was really good.”

Stephens considers himself a defensive defenseman – “I protect my house first,” he said – but he also tries to join the rush when he can.

“But not too much,” he said. “You won’t see me up there too much. I make that good first pass and I’ll try to use my speed as much as I can.”

Lambert helped Stephens mature. Beginning next season with a new coach will be different. But he was glad to have Lambert at camp last week.

“Oh, he’s helped me so much,” Stephens said. “One of the guys that I have to thank for me being up at this level where I am right now.”