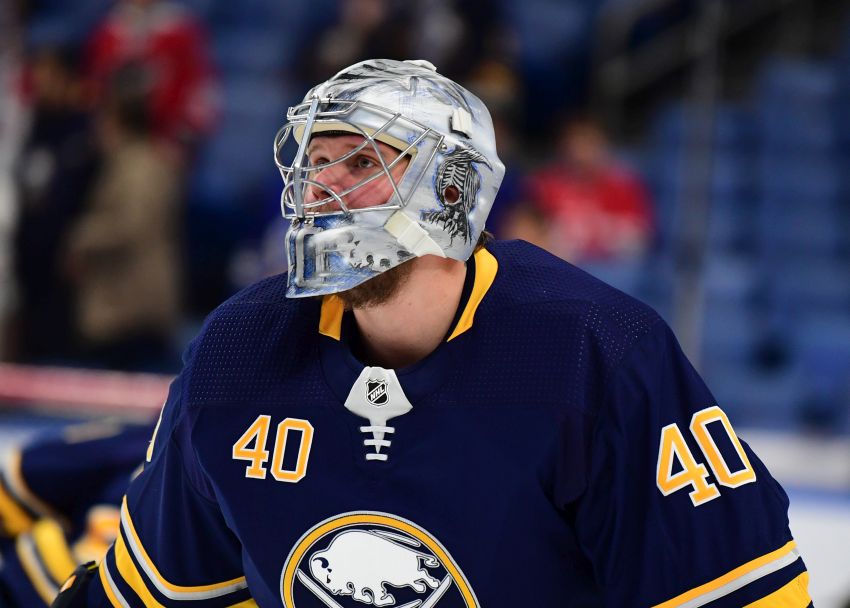 “I wanted to kill myself. I was extremely close multiple times,” Lehner wrote in The Athletic New York. “The battle playing hockey was nothing compared to the battle inside my brain. It was at its worst.”

The story, published Thursday, offers a gritty account of Lehner’s final weeks with the Sabres and his recovery process. The Swede, 27, joined the New York Islanders on a one-year contract in July following three seasons in Buffalo.

Today, Lehner wrote he is a “happy man.” But toward the end of last season, he was drinking a case of beer a day “to settle the demons in my mind” before taking sleeping pills.

“I was self-treating myself because I could not be inside my own head by myself,” he wrote. “The thoughts of ending it all … it was real and close.”

On March 29, he departed what would be his final game with the Sabres because he “was having a major, full-blown panic attack.”

At the time, the Sabres said Lehner had a lower-body injury.

“I thought I was suffering a heart attack,” he wrote. “I had no idea what was happening. I could not go back on the ice.”

Shortly after that, through the NHL/NHLPA substance abuse program, Lehner entered rehab at The Meadows, a treatment center in Arizona. He was diagnosed “bipolar 1 with manic phases” and ADHD with PTSD and trauma.

Lehner was so scared to leave treatment he stayed an additional four weeks.

“I was told if I ever drank again, I would probably die,” he wrote. “Now, that mattered.”

Lehner is grateful for the support Sabres general manager Jason Botterill continues to offer him. While Lehner was willing to stay in Buffalo, he and the team agreed he needed a fresh start.

“My family and I thought a restart would be the best thing,” he wrote. “I still wanted to stay if they wanted me. But deep inside I knew changing scenery would be the best thing for my recovery. … My relationship with Jason didn’t end in that meeting. He contacted me during the summer a few times to check in on me. His check-ins still continue today, despite me not being on his team.”

Sabres center Jack Eichel said he spoke to Lehner a few times earlier in the summer.

“He’s a really good guy and he was a good teammate to us,” Eichel said Thursday inside KeyBank Center. “It’s never good to see somebody you care about go through that stuff. I’m happy to see him get another opportunity and it’s great to see he’s worked things out.”

Sabres defenseman Zach Bogosian said: “That’s one thing in sports that a lot of people don’t see. You see on TV, 7 o’clock, the bright lights, everything’s great and you’re getting paid to play a great game for a living, and it is tough to see a teammate you care about go through stuff.

“But it is good to hear that he’s doing well. I played with him for three years, and I have nothing but good things to say about him.”

Housley said Steve Smith’s arrival as an assistant coach from Carolina means assistant Chris Hajt will move from the bench to the press box this season.

“Chris Hajt is just going to be moved upstairs. It’s going to be great for him to develop as a coach up there and (share) some valuable information between periods.”

The Sabres hired Smith in July. Last season was Hajt’s first as an NHL assistant.

Housley said the vacant captaincy will be evaluated throughout camp.