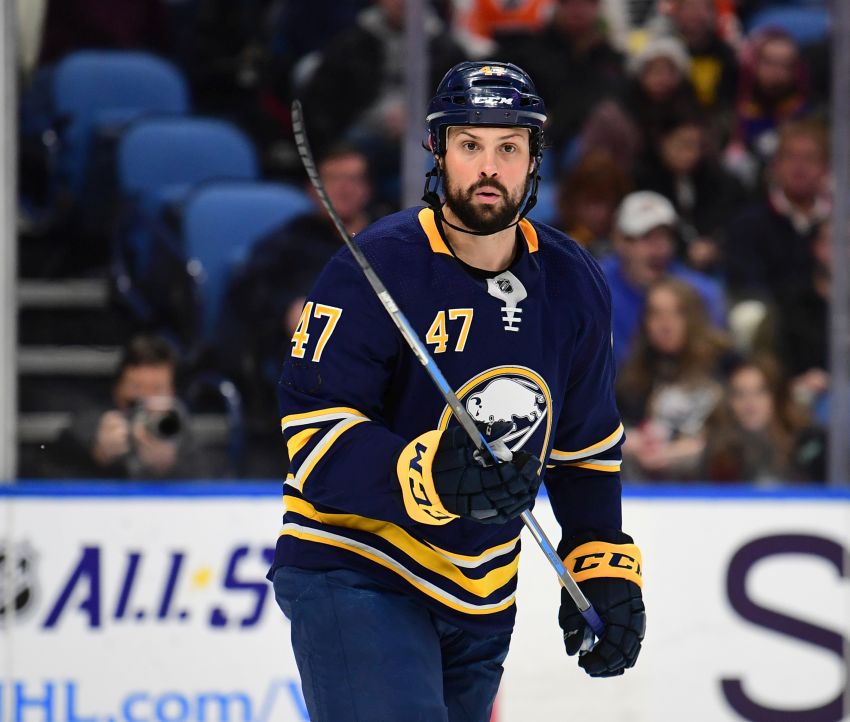 Zach Bogosian is one of the longest-tenured Sabres. ©2018, Hickling Images

BUFFALO – The open communication among the Sabres and the accountability it has generated is new and welcome.

In the recent past, problems often festered and the Sabres usually imploded at the first hint of adversity. Some players clearly felt uncomfortable discussing any issues with each other.

Then following last season’s dreadful 31st-place finish, coach Phil Housley challenged the Sabres. He wanted self-reflection. He wanted them to change before the new season, which kicked off Thursday morning, when veterans reported for their training camp physicals.

“In that change, they held each other accountable,” Housley said inside KeyBank Center. “They had to get things out on the table. I give all them the credit, because they have had to put themselves in a vulnerable position at times, they’ve had to listen to feedback and a lot of criticism that I think they might not like to hear.

“You feel like if you have something bothering you, you can get it off your chest, if you think that we have to change something around the room – whatever it may be,” he said. “Phil’s been great for the last few weeks with us, having our input, seeing what we think.

Eichel was loose during his conversation with reporters Thursday, smiling and joking around. At one point, he cracked hockey players are “professional complainers.”

“He is human, eh?” Housley said. “He can crack some jokes and feel good.”

The Sabres’ busy offseason recharged Eichel, who talked about the “good energy in the building” and the excitement for the new season even trickling down to the trainers.

With first overall pick Rasmus Dahlin, a youngster some believe is the best defense prospect in decades, in their arsenal, and other new additions, including wingers Conor Sheary and Jeff Skinner it’s easy to understand the Sabres’ enthusiasm.

“I think everyone knows how we can be a much better team, much different team,” said Eichel, whose eight-year, $80 million contract extension kicks in this season. “It’s not going to happen overnight. But I think we see our potential.”

This year, he could surpass the 30-goal or 80-point marks.

Housley said he sees “a maturity in Jack” and feels a “different vibe” around the team.

“With our leadership group being able to speak their hearts to each other and feel vulnerable, not have all these defensive mechanisms come up,” Housley said. “That’s part of the change. It’s good to see Jack in a good spot.”

Bogosian said: “I think everyone kind of took a long, hard look in the mirror, got a chance to clear their head over the summer and come back with a positive mindset, a fresh mindset and get excited for the season.”

Of course, optimism runs rampant everywhere on the first day of training camp. The Sabres haven’t even been on the ice yet. They have their first two sessions today inside HarborCenter.

“We haven’t been tested and we’ve got a lot of work to do,” Housley said. “There’s going to be adversity. It’s going to be interesting to see how we handle that. I know last year it really affected us.

“But I think – and I can only speak from this day – that there’s a good vibe going on in that room with all the players and there’s going to be a lot of competition, which is healthy for us.”