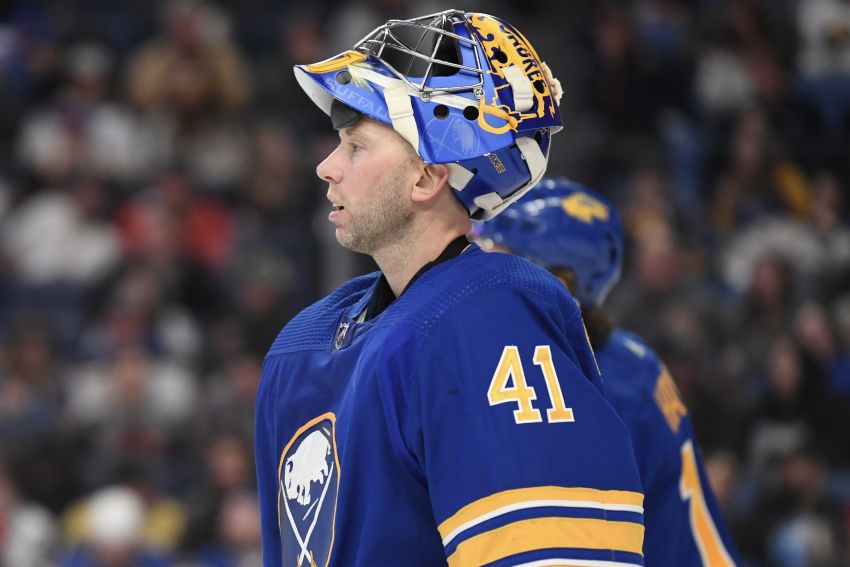 Prior to this weekend, Anderson said he hadn’t thought about the outdoor game. The veteran needed to stay in the moment, and on Thursday, he backstopped the Sabres to a 3-1 win over the Vegas Golden Knights, his 300th NHL victory.

“But now that we’re here … I remember how much fun it is out there,” Anderson said. “Being out there, today’s skate, you’re on the ice, it’s cold, the wind’s blowing, you’re all bundled up. And just kind of the pure joy of hockey takes over. It’s still the NHL. It’s the kid’s game, the pure joy of the game comes out of these type of experiences.”

Anderson has a 2-0-0 record in outdoor games. If he wins today, he would become just the second netminder to record three outdoor victories, joining ex-New York Rangers star Henrik Lundqvist.

In Anderson’s last outdoor appearance at the NHL 100 Classic in 2017, the American had a 28-save shutout in the Ottawa Senators’ 3-0 win over the Montreal Canadiens.

The Sabres will make one lineup change for today’s game, inserting defenseman Mark Pysyk for Casey Fitzgerald, who suffered an upper-body injury in a fight Thursday. Fitzgerald did not practice Saturday.

Winger Anders Bjork and center Mark Jankowski, a Hamilton native, will likely be the Sabres’ healthy scratches against the Leafs.

Sabres center Tage Thompson lived all over the United States growing up because his father, Brent, played and coached. Thompson even spent two years in Alaska when his father coached the Aces, an ECHL team.

“It seemed like everybody had an outdoor rink in their backyard,” Thompson said Friday of living in Alaska. “There was one in like every school. Instead of a basketball court, it was an outdoor rink. So a lot of outdoor skating up in Alaska. A lot of fun, so it’s probably going to bring back some good memories playing an outdoor game.”

Sabres center Dylan Cozens, who grew up in the Yukon, said he doesn’t plan to wear many extra layers today. The temperature will be about 28 degrees when the game starts at 4 p.m., according to The Weather Network.

“I think just the harder you work, the warmer you get, pretty much,” Cozens said. “I think that’s a good incentive. I don’t know. I don’t really do too much extra stuff. I don’t like wearing the balaclavas (a hood) and all that. I’d rather just have my body naturally warm up to it, so I hope it’s not too windy.”

The Sabres will be the “home” team again today like in their last outdoor contest, the 2018 Winter Classic against the New York Rangers at Citi Field in Flushing.

They were also the home team in their first outdoor game, the 2008 Winter Classic versus the Pittsburgh Penguins at Highmark Stadium in Orchard Park.