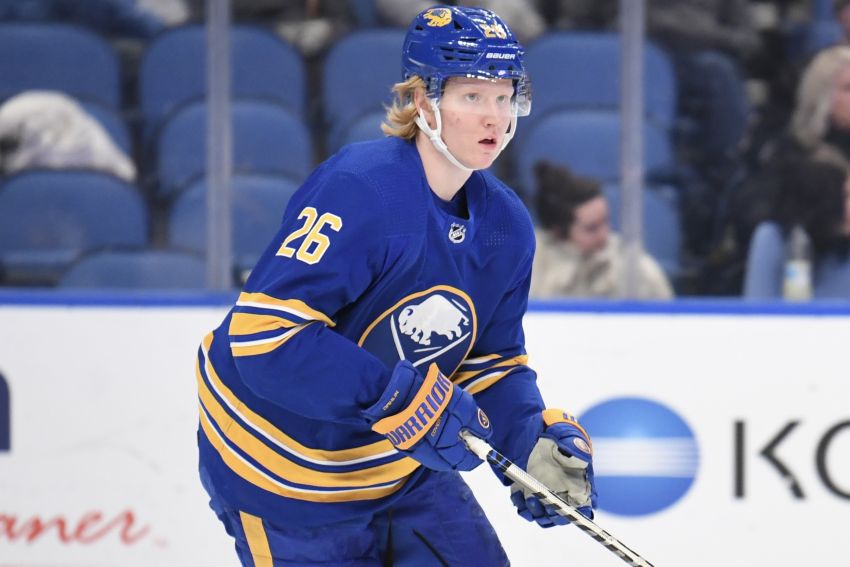 Rasmus Dahlin has been looking forward to playing outdoors for months. ©2022, Micheline Veluvolu

BUFFALO – It doesn’t matter that they’ll be playing a regular-season NHL game on a pristine sheet of ice before 24,000 fans. When the Sabres head outdoors for Sunday afternoon’s Heritage Classic, coach Don Granato believes the elements will take them back to a simpler time when they skated on frozen ponds and backyard rinks.

“You get the feel of being a kid,” Granato said following Friday’s practice at KeyBank Center. “The ice sounds like you’re on outdoor ice. Everything about it feels outdoors. From the clothes you wear, a little more turtleneck and you bundle up, and the way you sweat and the way you feel when you sweat, it’s amazing. It’s an amazing experience. It brings you back.”

Most of the players who participate in Sunday’s game against the Toronto Maple Leafs at Tim Hortons Field in Hamilton, Ontario, will likely play hundreds of NHL contests. The bulk of them, of course, will probably be forgotten about.

But outdoor affairs are such a special experience – they’re events, not mere games – they become seared in the players’ memories.

“Ever since I got the news, I’ve been looking forward to it,” Sabres defenseman Rasmus Dahlin said of playing his first outdoor game. “I’m super excited.”

The grandeur of it all excites Dahlin, who often skated outdoors growing up in Sweden.

“Playing outside, playing in a huge stadium in front of so many fans, I guess just walking out to the ice,” he said of what he’s looking forward to experiencing.

Families are welcome on the trip – there’s a skate for them following this afternoon’s practice at Tim Hortons Field – so it’s a weekend the Sabres can share.

“It’s just going to be a really cool experience for everyone involved,” Sabres center Tage Thompson said. “Something not many people get to do. So I’m just trying to take it all in, enjoy the experience.”

This stretch offers the Sabres some rare time in the spotlight. Thursday’s 3-1 triumph over Jack Eichel and the Vegas Golden Knights was their most emotional victory all season. Sunday’s game will be broadcast on national television.

The young team could be due for a letdown following Thursday’s win. So when Granato addressed the Sabres after their 19th victory, he talked about goalie Craig Anderson’s milestone 300th win and the team’s splendid all-around effort.

Then he shifted the focus to the Leafs. The Sabres throttled them 5-1 on March 2 in Toronto. The Leafs lost 5-4 in overtime at home Thursday to the lowly Arizona Coyotes.

“I would hope that us beating them – we’re not sneaking up on them– is going to help us before that puck drops,” said Granato, who was an assistant coach for the Chicago Blackhawks in 2019 when they participated in Winter Classic.

He added: “As a coach, that is a real nerve-wracking deal when you have a younger team that had success, and it’s hard for those teams in situations to kick back into work mode and to preparation mode.”

While everyone seems to love outdoor games, the ice and weather create challenges and perhaps a different style of hockey. Sunday’s forecast calls for light snow in Hamilton, according to The Weather Network.

When Thompson played at Fenway Park in Boston as a sophomore at UConn in 2017, he remembers the sun becoming a major factor.

“The glare off the ice you could barely see because it was so sunny with the ice,” Thompson said.

Granato said today’s 3:30 p.m. practice “is really significant.” The session gives the Sabres a chance to acclimate to the conditions and new surroundings.

“It’s even close to game time the next day (4 p.m.), which we felt was really good as well, something that will be helpful,” Granato said.

Granato said the elements means the Sabres must “streamline and simplify everything.”

“Just simplify the puck movement,” he said. “Less east-west, more north-south. Make them come back through it. So you do have to play smarter, you have to adjust.”