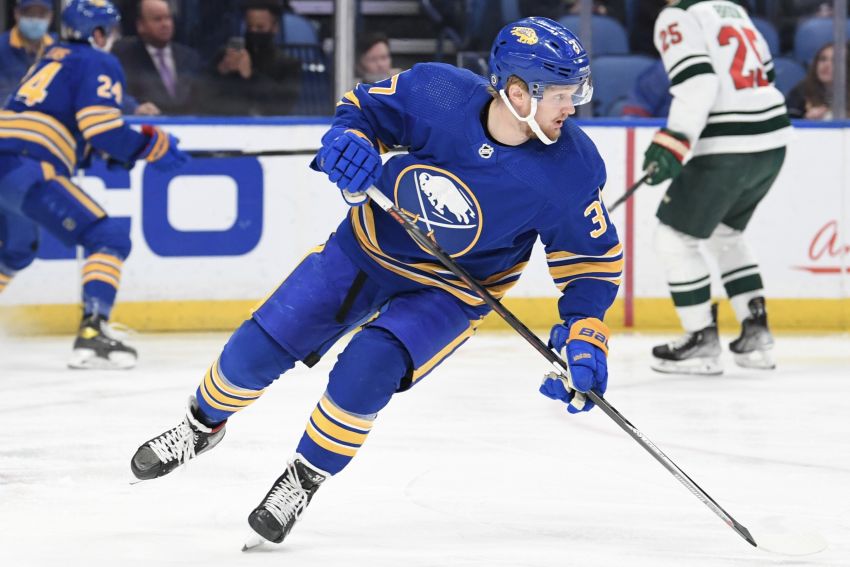 Casey Mittelstadt played in an outdoor game for Team USA as a junior star. ©2022, Micheline Veluvolu

HAMILTON, Ont. – In the midst of another grueling season, the Heritage Classic offers the Buffalo Sabres a refreshing change.

The day-to-day NHL grind has suddenly been interrupted by a once-in-a-lifetime experience for some players. When you play outdoors like the Sabres will this afternoon, you never forget it.

For a weekend, the Sabres can enjoy time in the spotlight and make memories they’ll cherish forever. Their families have joined them, and after Saturday’s chilly practice at windy Tim Hortons Field, everyone had a chance to enjoy a group skate.

“You’re playing a lot of games are practicing every day,” said Sabres goalie Craig Anderson, who will start this afternoon’s game against the Toronto Maple Leafs. “This breaks it up to the point where fresh look, fresh life, similar to an All-Star break or whatnot, just kind of really lighten the mood and brighten things up for it.”

Dylan Cozens’ father, Mike, traveled from Whitehorse, Yukon, to join the Sabres center. Cozens, not surprisingly, grew up skating on an outdoor rink his father constructed.

“He’s the one who got it all started for me building that rink every single year as a kid,” Cozens said. “So for him to be here for this game is awesome.”

“These games are special,” Granato said. “They have family here, that’s special. I know our team knows our opponent, knows the Leafs well enough that we have to dial in for the game tomorrow, but I want to make sure we all enjoy the moment today with family around, with the atmosphere going through the skate. …

“Great opportunity to really cherish this as a memory.”

When the Sabres walked out for their 4:30 p.m. practice – it was pushed back an hour due to weather – Granato said he immediately felt the cold. During their skate, it was about 24 degrees. The wind made it feel much colder.

“That was the first wow factor,” Granato said of the cold. “The wind was the second. The setup is spectacular and when you walk off it really hits you after you just went through that practice, and you had that experience being outside playing hockey.

“The ice conditions were exceptional. They’ve done a tremendous job on the ice and the atmosphere. It was nice to just watch our guys have fun.”

Prior to practice, the Sabres posed for a team photo with everyone on the roster, even injured players, in the throwback-style uniforms they’ll wear today.

Sabers winger Drake Caggiula recently underwent season-ending neck surgery and has been rehabbing away from the team. But Caggiula joined the team Saturday and hopped over the boards in a jersey for the photo.

“These guys have really come together and they’ve become a very, very tight family group,” Granato said. “And him walking out there was nice.”

Granato said Saturday’s practice was “really simple.” He wanted guys to get up and down the rink.

“We had them switch ends a couple different times,” he said. “There were some shadows out there. The clouds were moving through. The wind was really different going one direction against the other. There was a pretty good head wind. Nothing more than allowing our guys to acclimate to those elements.”

That stiff wind forced the Sabres to change things up.

“There’s a dramatic difference in how you execute,” Granato said. “It’s interesting to just watch our guys snap the puck around. There’s a completely different velocity on the puck … It was good to get out there today for our guys, I’m sure for both teams to have that one day of acclimation because you do need to acclimate and adjust to it.”

Sabres center Casey Mittelstadt said the wind was blowing the puck and his stick.

“I honestly think by the end of practice we started looking better, making better passes and things like that,” he said. “Yeah, it’s an adjustment, for sure.”

Mittelstadt said when he played for Team USA at the outdoor game in the 2018 World Junior Championship at Highmark Stadium in Orchard Park, he was freezing in the first period.

“All of a sudden, you just forget about it and how cold you are and you just start playing hockey,” he said. “That’s when it gets fun.”