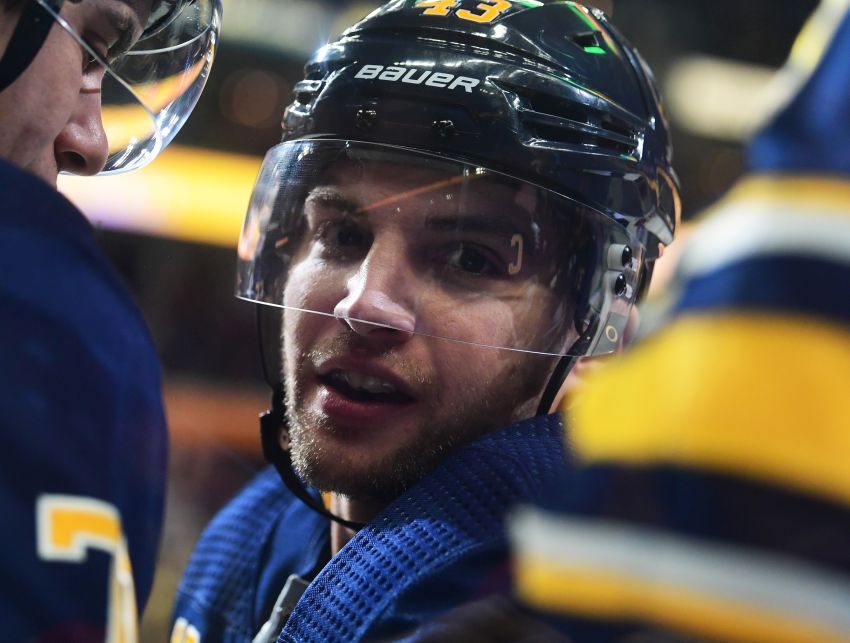 The slick goal, just Sheary’s third in the last 34 outings, served as another reminder the diminutive UMass product ranks among the Sabres’ most talented forwards.

“Once I got the turnover, I think I just tried to attack quick,” Sheary said following the Sabres’ 3-1 win against the Detroit Red Wings inside KeyBank Center.

But after scoring six times in the first 16 contests, Sheary endured a marathon slump, going 28 games without scoring past a goalie. His only goal over that stretch was an empty-netter Dec. 22.

In recent weeks, however, the two-time Stanley Cup winner has started looking more like his regular self, compiling two goals and 10 points in the last 14 outings.

Over the past few games, Sheary, center Casey Mittelstadt and Sam Reinhart have been perhaps the Sabres’ most aggressive line.

“That line, for me, has been really tenacious,” Housley said. “The chemistry is forming. They’re getting some opportunities now. A lot more offensive zone faceoffs. I think they just read off each other very well.”

“When we’re good, we’re effective on the forecheck and we’re creating turnovers and making plays off of that,” Sheary said. “I think lately we’ve been making simple plays, getting pucks behind the D-men and just going to work. I think simplifying our game has really changed our dynamic.”

Sabres defenseman Marco Scandella doesn’t remember much about his NHL debut with the Minnesota Wild on Nov. 12, 2010.

“I feel like it’s a blur,” said Scandella, who played his 500th NHL game Saturday.

Scandella, 28, said he was already in bed when his phone rang at 11 p.m. the previous night. Minnesota needed to summon a defenseman for its tilt against the Panthers because the NHL had suspended Brent Burns for elbowing.

So Scandella, who was playing for the Wild’s old AHL affiliate, the Houston Aeros, took a 6 a.m. flight to Florida.

“I remember playing a few shifts, but I feel like everything happened so fast,” Scandella said.

Scandella shuttled between Houston and Minnesota for two more seasons before finally sticking in the NHL in 2013-14.

The Sabres made one lineup change, inserting winger Tage Thompson, a healthy scratch for Thursday’s 6-5 overtime loss to the Carolina Hurricanes, for rookie C.J. Smith.

“I liked C.J.’s game, but it’s part of his development,” Sabres coach Phil Housley said. “I thought Tage had a really good, solid game against Detroit last game. We’re just getting him back in the lineup.”

Well-traveled former Sabres star Thomas Vanek is in his second stint with the Red Wings this season.

Vanek, 35, signed a one-year, $3 million contract to return to Detroit.

The winger has become a popular late-season acquisition, having been traded three times – in 2014, 2017 and 2018 – before the deadline.

Vanek could be moved again this year. The Red Wings likely won’t make the playoffs.

The former fifth overall pick has kept producing in his 14th season. He recorded an assist Saturday, his 10th point – four goals and six assists – in the last nine outings.

The Sabres welcomed back former coach Dan Bylsma, who’s in his first year as an assistant with the Red Wings, during a stoppage in play.

The Sabres also scratched defensemen Nathan Beaulieu and Matt Hunwick. Beaulieu has sat out 17 of the last 21 games as a healthy scratch. Meanwhile, Hunwick has been scratched 18 of the last 19 contests.

It will be interesting to see if Housley starts goalie Linus Ullmark again this afternoon against the Winnipeg Jets.

Sabres goalie Carter Hutton made 25 saves against the Jets in a 2-1 shootout win Nov. 16 in Winnipeg.

Hutton hasn’t played since getting yanked from a 7-3 loss to the Chicago Blackhawks on Feb. 1.