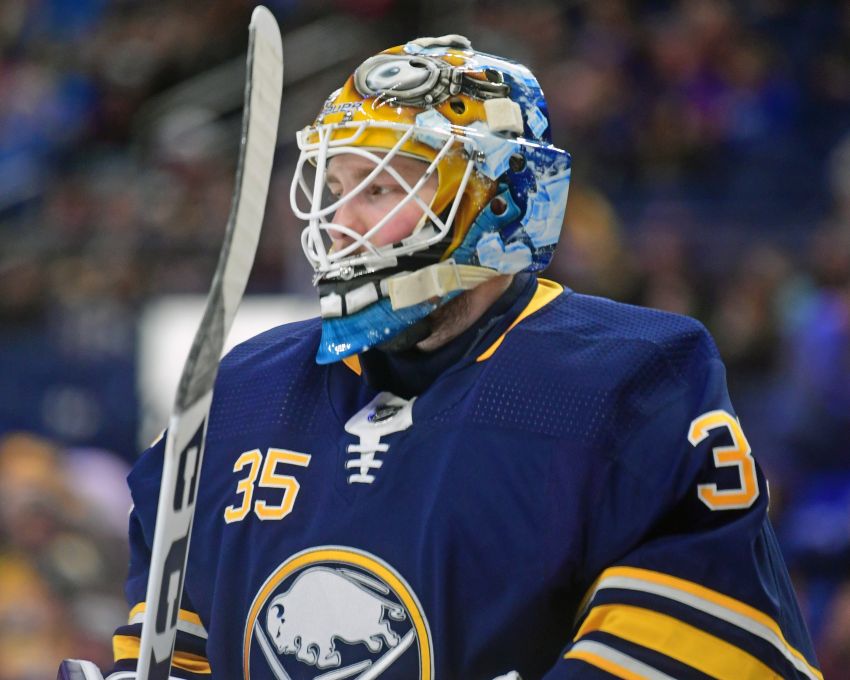 BUFFALO – See, the Sabres can still showcase a strong defense. It’s just that sometimes, most notably throughout the disturbing 10-game stretch that preceded their tight 3-1 victory over the Detroit Red Wings, they rarely showed much interest in it.

“Mentality, we wanted to defend,” Sabres center Evan Rodrigues said of what changed Saturday afternoon, two days after an ugly 6-5 overtime loss. “We didn’t want to the other day. Today, we made a conscious effort of keeping the puck out of our net.”

The Sabres sorely needed a sturdy effort. They kept breaking down Thursday against the Carolina Hurricanes, suffering arguably their most frustrating loss this season.

Following that game, they sounded frustrated, even angry. Sabres coach Phil Housley and winger Sam Reinhart both issued mea culpas Friday for some of their words after that defeat.

If the Sabres roar back and snatch a playoff spot, perhaps Saturday’s win before a capacity crowd of 19,070 inside KeyBank Center will be looked at as a turning point.

“They refocused, but the thing for me is that’s a tight group in there,” Housley said. “They care for each other. Our coaching staff has done a great job. I think it just brought us tighter together, the things that went on.”

The Sabres controlled most of Saturday’s contest, going up 2-0 in the second before ending the period up 3-1 thanks to two power-play goals.

Then unlike so many recent efforts, they locked down late and controlled the front of their net, showcasing an aggressive defense.

The Sabres also received solid netminding from Ullmark, who made 28 saves, including a breakaway stop on Andreas Athanasiou with about eight minutes left in the tilt.

“The guys responded really well,” Housley said. “I thought we did a much better job in front of our net. When they did get to the interior, (our) guys tied them up and we were able to box them out to give Linus a good line of sight to the puck.”

To illustrate how the much Sabres changed in a two-day span, goalie Linus Ullmark described a nondescript play very few probably noticed.

In the third period, Sabres defenseman Rasmus Ristolainen boxed out an opponent around the crease, allowing Ullmark to freeze the puck.

“We can get a whistle, get the guys changed,” Ullmark said. “It’s just one of those small plays people don’t really notice it. It’s because nothing fancy happened. It’s just me putting the glove on top of the puck. But it was what happened before that that enabled me to do it.”

He added: “We mostly talked about we got to clean up our own end. I thought we did a terrific job back there. We didn’t give them anything, and once we did give them something, we recovered very well.”

Saturday’s win certainly offers the Sabres a blueprint for success.

“This is the way we have to play if we want to win games,” Rodrigues said. “It’s not a hard recipe. We defend. We have enough talent to bury chances on power-play goals. That’s what it comes down to. We defend, we’re going to win.”

The power play, which converted just one of its 25 opportunities in January (4 percent), has scored five times in 10 chances this month.

After winger Conor Sheary opened the scoring 1:15 into the second period, center Casey Mittelstadt scored on the power play at 10:05. Detroit’s Dylan Larkin scored a power-play goal before winger Kyle Okposo capitalized on the man advantage at 19:29.

Why has the power play suddenly started humming?

“It’s a mix of everything,” Mittelstadt said. “I think we’re moving the puck really well and taking shots when they’re there. I think what we did really well tonight was working on recovery, getting the puck back. I think before my goal they had a chance to get it out three or four times, and we had guys there.

The Sabres host the Winnipeg Jets this afternoon, the fifth tilt of their seven-game home stand.