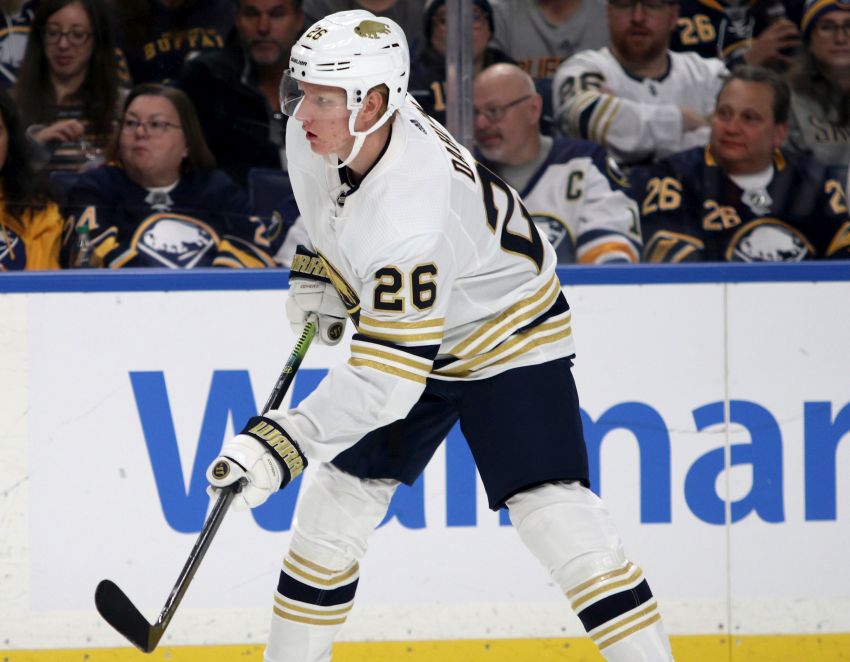 BUFFALO – The two-game suspension the NHL laid on Erik Cernak for elbowing Sabres defenseman Rasmus Dahlin in the face and concussing him seems light.

Cernak, who wasn’t penalized for the hit, can return to the Tampa Bay Lightning’s lineup Saturday. Dahlin, meanwhile, is out indefinitely, the Sabres announced prior to Wednesday’s 3-2 overtime loss to the Calgary Flames.

“We’re just going to accept the result as it is,” coach Ralph Krueger said inside KeyBank Center. “Again … you would always rather have the five minutes in the game because the suspension doesn’t do us any good.”

The Dahlin incident was the second time this month a Lightning player knocked a Sabre out of the lineup.

On Nov. 8 in Stockholm, Sweden, star Nikita Kucherov hit forward Vladimir Sobotka late and low. The Czech, who has missed nine games, is out indefinitely after undergoing surgery on his right knee, the Sabres announced Wednesday.

The days of wild brawls, of course, have ended. But the Sabres did not retaliate in any fashion after either hit.

“It was the same with the Sobotka hit in Sweden where nobody in the rink, including the referees, actually read it because the puck was not there anymore and gone,” Krueger said of Cernak’s hit. “At the moment, when Rasmus actually went down and then came up, until there was blood coming out of his face we didn’t really realize the situation.

“So, spontaneously, it wasn’t one of those hits from behind into the wall where everybody sees exactly what happened. It was within the game, within the play. Did that stick go up? Did his elbow go up? Did it not? Again, the referees couldn’t read it spontaneously. We’re trying to win a hockey game.

“We’re on a power play and we’re losing 3-2 (on Monday). Our focus was on that. Is it something to learn about? Yeah, it’s possible. But this group is very close. This group is working hard for each other. And, again, the way the game is today, it has evolved. … Respect among the players is much, much higher than it was when I was here last in (2013).”

His concussion, of course, is a huge blow to the Sabres. The Swede, the first overall pick in 2018, compiled 15 assists and 16 points in the first 24 games.

While Dahlin has struggled defensively this season, he’s a dynamic talent.

With Dahlin out, defenseman Jake McCabe, a healthy scratch Monday, returned Wednesday. The Sabres also sat out Colin Miller, the sixth time in eight games the newcomer has watched.

The Sabres had been dressing seven defensemen and “rotating” some in and out. Krueger said he wants to “spread the energy out.”

The Sabres made one other lineup change, inserting center Jean-Sebastien Dea for Curtis Lazar. The Sabres recalled Dea on Monday before scratching him.

Notes: Krueger moved up Johan Larsson to center 40-goal scorer Jeff Skinner and Conor Sheary. “He’s an easy guy to read out there,” Skinner said of Larsson. “He’s strong on pucks and he wins a lot of his battles. … When your center’s winning battles like that, it’s easier to create opportunities because you’re able to get open and get the puck with a little bit more time and space. … Sabres center Evan Rodrigues (lower body) missed his second straight game. Rodrigues is week to week, according to the team’s injury report. … The second annual Sabres Skills Challenge will be held on Jan. 5 at KeyBank Center.