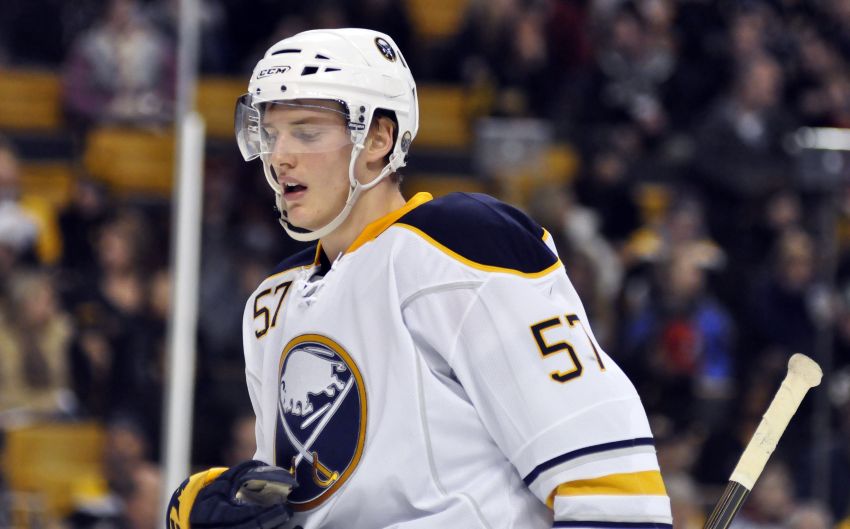 BUFFALO – Star Sabres defenseman Tyler Myers, who hurt his foot blocking a shot Friday, is wearing a walking boot and out at least the last two regular-season games.

Is the foot broken?

“He’s got a bad foot, yeah,” was all Sabres coach Lindy Ruff said Wednesday after practice inside the First Niagara Center.

Myers didn’t make the trip to Philadelphia for tonight’s contest against the Flyers.

When asked if Myers could return if the Sabres make the playoffs, Ruff asked, “What part of the playoffs?”

He added: “Tyler’s out. It could be a period of time. … It’s more than just this week.”

The Sabres’ other top defenseman, Christian Ehrhoff, will be sidelined (knee) at least until a potential first-round series.

They sorely miss both. The Sabres allowed five goals without Ehrhoff on Friday, and then 10 without both defensemen in two games.

Other defensemen have been contributing, however.

Alexander Sulzer, an extra in Vancouver and briefly here following his Feb. 27 arrival, played a season-high 24:35 in the Sabres’ 6-5 overtime win Tuesday against Toronto, scoring a career-best two goals and three points.

“I’m happy with the trust I get from the coaches,” Sulzer said. “I just try to play an easy, simple game. And if I see a little offensive play, I try to make it.”

Sulzer was also on the ice for three Maple Leafs goals.

“Yeah, he made some mistakes,” Ruff said. “He was right on his toes to get them back. That was the part that impressed me the most.”

This guarantee probably won’t become legendary like Joe Namath’s before Super Bowl III or Mark Messier’s prior to Game 6 of the 1994 Eastern Conference final.

In an appearance on 106.7 The Fan in Washington, Brooks Laich, whose eighth-place Capitals hold the tiebreaker over the Sabres for the final Eastern Conference playoff spot, said his team would make the postseason.

“I have a belief we’re going to be in the playoffs and that’s it,” he told Washington reporters.

Both the Capitals and Sabres have 88 points with two games remaining. The Capitals are still chasing Florida, who they host tonight, for the Southeast Division lead.

The Sabres can also catch the Panthers (92 points), who need one point to clinch the division and third place.

“We got our work cut out for us. They got theirs. Our thoughts are making the playoffs, too.”

Sabres goalie Ryan Miller added: “We’re not playing against him. It’s not Mark Messier. I think he’s searching for a spark for his team. They should be desperate right now, too. So I think they’re just looking for little things. I don’t think anybody in this locker room would go so far as to start to do that.

“It’s distracting. Hopefully, it’s a huge distraction for them. Some guys don’t react well to that. Guys might tighten up. Maybe their goaltenders – young goaltenders – aren’t going to react well to a guaranteed victory by their veteran guy. I think they start thinking about it.”

Sabres rookie Marcus Foligno said Mike Komisarek slashed him prior to Leopold’s goal, which Foligno created by knocking the Leafs defenseman off the puck and driving to the net.

“I don’t know if it was one of those things where last minute, two minutes of the game he was trying to put fear into someone,” Foligno said. “ … I wasn’t going to have any of that. I gave it right back to him.”

Komisarek was hitting Foligno on the ice when Leopold poked the puck home.

Foligno made sure Komisarek saw him celebrate.

“Scoring against a guy that’s been heckling you all game is probably the biggest relief and the biggest rub in the face,” Foligno said. “I was just so jacked up that he was giving it to me and we were able to score when he was on the ice. I just wanted to let him know we scored against him.”

Ruff on why he replaced struggling six-goal scorer Brad Boyes with winger Nathan Gerbe on Tuesday: “Part of it is production. Part of it was we know Nathan can add some tenacity and speed to the game. The games have been typically three-line games. With where we’ve had him at, we just felt that Nathan would be more effective.”

Ruff said defenseman T.J. Brennan felt sick and wasn’t sent back to Rochester. They planned to see how the rookie felt after his workout Wednesday.