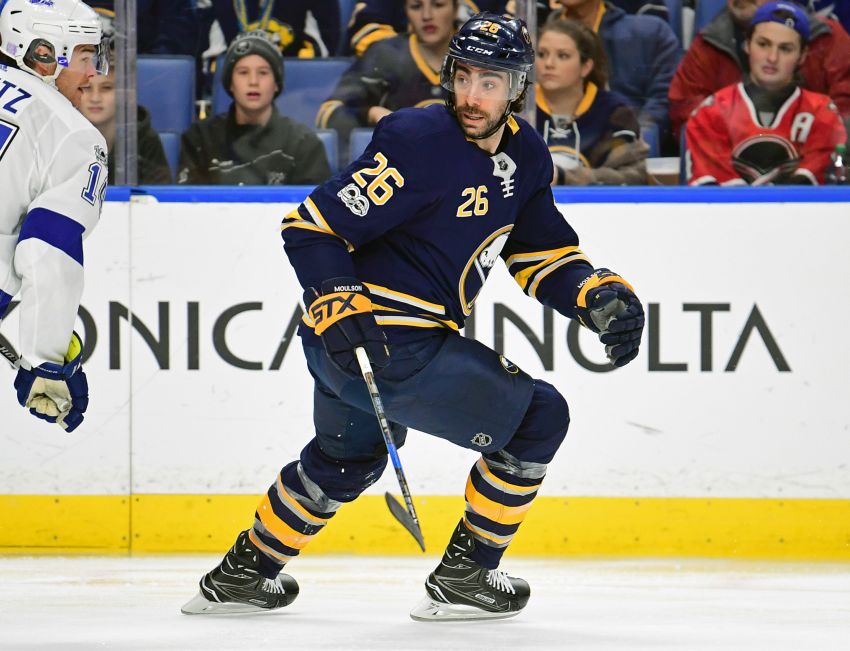 BUFFALO – Long before practice begins most days, Sabres winger Matt Moulson can be found on the ice, smiling and shooting pucks or working on something else.

Instead of pouting over becoming a healthy scratch, Moulson, 34, has tried to quietly go about his business.

“It (stinks),” Moulson said of sitting out. “I think it’s not fun when you’re not playing, not helping contribute in games, it’s a tough position. You got a couple choices when that happens, you can sulk or do something about it. I think that’s where I’m at.”

Moulson found himself at right wing beside center Kyle Criscuolo and Zemgus Girgensons for Tuesday’s tilt against the Tampa Bay Lightning.

After sitting out six straight games, Sabres coach Phil Housley awarded Moulson his first action since Nov. 14. The Sabres sent winger Seth Griffith to the AHL on Monday, opening up a space for the struggling veteran.

“I’ve been putting in a lot of work for the last little bit,” Moulson said Tuesday morning inside KeyBank Center.

In 12 appearances this season, the three-time 30-goal scorer has zero points and a minus-8 rating.

Terrific hands and skills around the net helped Moulson morph into a top scorer with the New York Islanders over a four-year stretch from 2009 to 2013.

But with a bigger premium on speed these days, Moulson’s production has plummeted in recent seasons. Still, following an eight-goal season in 2015-16, he enjoyed a solid comeback a year ago, scoring 14 times.

This season, however, Housley has scratched him 12 times.

“It’s difficult,” Housley said of Moulson sitting out. “If you’re a true competitor, you want to be playing, you want to be helping your teammates. It’s disappointing, but we sit where we are (in last place), we’re going to continue to make changes.”

He added: “He’s handled it quite well. He’s been a great teammate, he’s come to work and he’s approached the practices the right way.”

Housley changed his approach to the Sabres’ struggling power play Tuesday, spreading out his first unit and giving Moulson some action.

Sabres defenseman Zach Bogosian, out all season with a lower-body injury, sat out again Tuesday. Bogosian went through his first full practice Monday.

The Sabres made one change on defense, inserting Justin Falk for Josh Gorges.