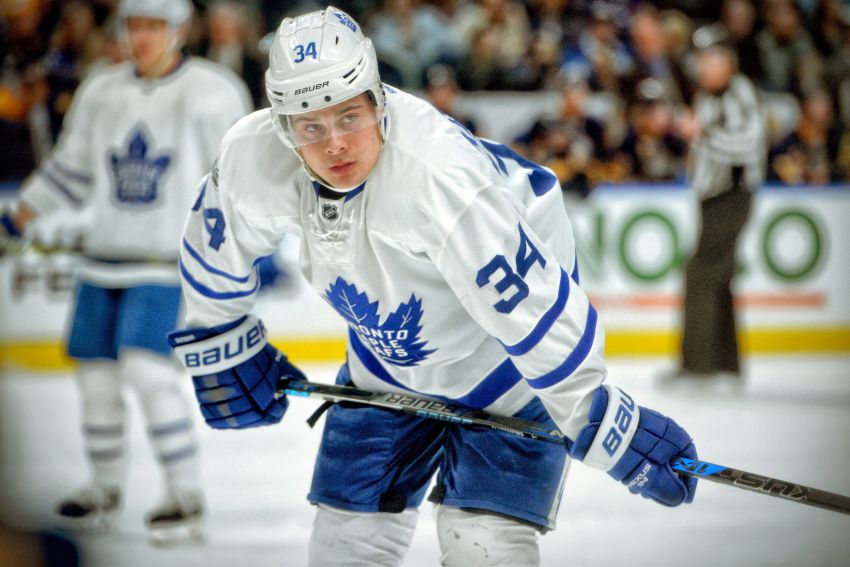 Auston Matthews is one of Toronto’s young stars. ©2018, Micheline Veluvolu

BUFFALO – Ask any Sabres player or fan to name the team’s biggest rival, and they would likely peg the Toronto Maple Leafs, tonight’s opponent at KeyBank Center.

Without any recent playoff series – the Sabres haven’t made the postseason since 2011 – or high-stakes regular-season meetings to ramp up intensity and generate hatred, the Sabres don’t exactly have a lot of opponents they detest these days.

The Leafs, their closest opponent at just 100 miles away, have been a convenient rival.

“I feel like if you asked the Toronto Maple Leafs, ‘Who are your biggest rivals?’ it would be a bunch of other teams before they got to Buffalo,” said former Sabres goalie Martin Biron, who noted Toronto has played thrilling playoff series against the Washington Capitals and Boston Bruins in recent seasons.

The Sabres and Leafs haven’t played any truly meaningful tilts in a long time.

“Rivalries can die off,” said former captain Michael Peca, who helped push the Sabres past the Leafs in the 1999 Eastern Conference final to compete for the Stanley Cup.

Neither team has made the playoffs in the same season since 2001. Before the Leafs’ resurgence over the past three seasons, both teams were pretty bad.

“The last few years here in Buffalo the rivalry has been one-sided,” Biron said. “It’s like the Leafs are the Sabres’ rivals, but the Sabres are not the Leafs’ rival.”

But that could change soon. The teams will meet tonight as two of the NHL’s heavyweights for the first time in more than 17 years.

The bipartisan crowd inside KeyBank Center should be noisy all night.

The Leafs, having earned 38 points (19-8-0) entering Monday’s games, ranked second in the ultra-competitive Atlantic Division and second overall in the NHL, trailing only the Tampa Bay Lightning.

The Sabres, meanwhile, had gained 37 points (17-7-3) before Monday’s road tilt against the Nashville Predators, putting them third in the division and fifth overall.

“Both teams are trending upwards, there’s no doubt about it,” Peca said.

Biron said: “I do believe that it’s going to start changing, because now there’s a lot more riding on the line when those teams are going to meet.”

Given the makeup of the Sabres and Leafs – they’re young, exciting and feature two American stars in Jack Eichel and Auston Matthews – the rivalry between the talent-laden teams could be rekindled for years and years.

Entering Monday’s games, the Sabres and Leafs were on track to play a first-round playoff series.

“In a perfect world, these teams meet up in the first round this year,” Biron said.

“Anytime you play a conference final, especially with short proximity, it’s going to be a major rivalry for years after that,” Biron said.

Peca said: “There were little stories within the rivalry that made it an enjoyable rivalry. Both teams were really competitive.”

Biron remembers Domi, not exactly the most skilled forward, chasing Brian Campbell around the ice one night after the slick Sabres defenseman hit him.

“Soupy was quick with the spin-o-ramas and all of that, and I remember thinking, ‘What is this guy doing?’” Biron said. “Tie Domi is chasing a 22- or 23-year-old Brian Campbell around the ice trying to just kill him. That’s what was so interesting, I think, at that time with the rivalry it wasn’t just Tie Domi-Rob Ray, it was a whole team thing that would happen.”

Following the 2005 lockout, the Sabres began consistently pummeling the Maple Leafs, who have historically struggled in Buffalo.

“I remember Tim Connolly walking all over Ken Klee and going bar down backhand on Eddie Belfour,” Biron said of one of Connolly’s most memorable goals. “I remember the building exploding when that happened at home.”

Still, Biron, a Sabres regular from 1999 until 2007, said in the dressing room, the Ottawa Senators and Philadelphia Flyers were possibly seen as bigger rivals “because of all the playoff meetings.”

If the Sabres and Leafs meet in the playoffs come April, you can bet they’ll be fierce enemies again.