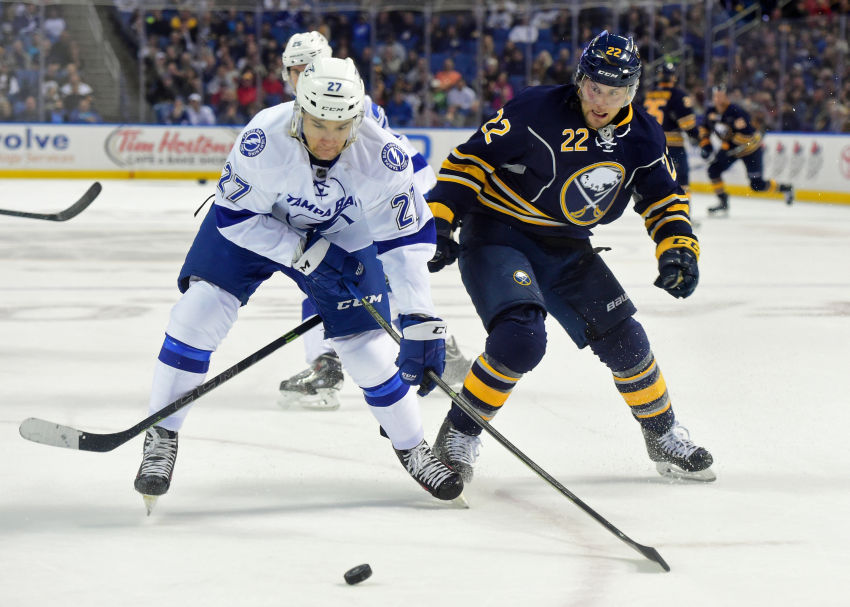 BUFFALO – The eye test shows the Sabres have already improved this season. The games are cleaner and more exciting. They often operate as a cohesive unit and carry the play.

Still, the Sabres, who added a new coaching staff and about 10 players during a wild offseason, are a work in progress.

A 4-1 loss to the Tampa Bay Lightning before 17,739 fans Saturday afternoon inside the First Niagara Center dropped them to 0-2. They’ve scored two goals.

The Sabres better develop that quickly. They have one game left on their home stand, Monday afternoon against Columbus, before a two-game Florida road trip. They play the Lightning four times in the first 14 games.

“We need to be better,” said winger Nick Deslauriers, who scored the Sabres’ only goal. “I think we’ve started on the wrong path right now, and I think we need to step up. It can’t be in a week, a month. It has to be tomorrow.”

But the Sabres won’t get far if they can’t score. Three new offensive threats – rookie Jack Eichel, Evander Kane and Ryan O’Reilly – have combined for one goal.

Bylsma, however, is more concerned with preventing goals than scoring them.

“I don’t worry so much about the ones that go in the net,” Bylsma said. “I think you’re going to get those and find those. Tonight against a good team, we gave them essentially three goals.”

The Sabres, of course, won’t score unless they shoot the puck and get to the net.

“Too many times we’re trying to pass it into the net,” Bylsma said.

Erik Condra opened the scoring 8:14 into the second period. Deslauriers tied it at 13:55, sweeping in a shot from in close.

“They’re certainly not going to be pretty when he scores, and that one wasn’t,” Bylsma said.

Stamkos outmuscled Eichel in front and scored at 8:53 after Ryan Callahan intentionally bounced the puck off the side of the net from right corner.

“First period we had the same exact play, tried to go through a couple guys and ended up getting picked off,” Callahan said. “I said, ‘I probably should’ve put it off the net to you.’ I end up getting the same play and it worked out.”

“There’s always a little hole there where my skate and my stick is, no matter how you seal it, and then it went right to him,” Johnson said. “Just kind of one of those lucky ones I guess guys like him get, you know?”

Johnson, who subbed for injured starter Robin Lehner, looked sharp from the get-go, stopping eight shots in the first period and 27 overall.

“I thought he was good,” Bylsma said. “I think get three real good, Grade A (saves) in the first.”

Johnson added: “I felt good with my game. I thought I was in position for a lot of the shots and I was set. I was where I wanted to be.”