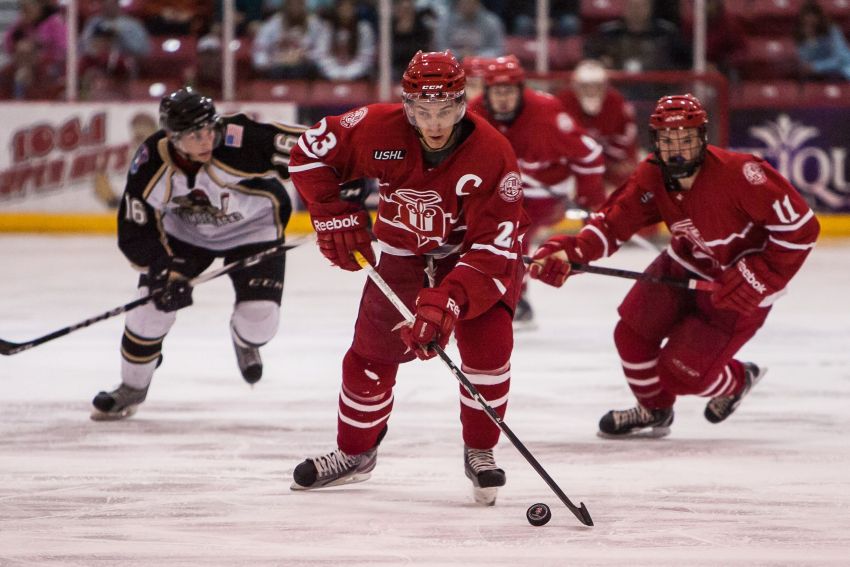 PITTSBURGH – A blockbuster trade for established talent never materialized. Instead, the Buffalo Sabres dished two high choices to Calgary early, grabbed their second coveted center during a wild first round and kept on picking.

The Sabres grabbed Jake McCabe, a University of Wisconsin defenseman they had projected as a late first-rounder, 44th overall Saturday.

But the draft’s highlight, naturally, was selecting Mikhail Grigorenko 12th on Friday before quickly trading the 21st and 42nd picks to move up and take Zemgus Girgensons 14th.

The two Europeans could someday become the Sabres’ franchise centers.

“The focus is on centermen, some size, and those two players were identified,” Sabres general manager Darcy Regier said. “And we were fortunate in that that there was a run on defensemen.”

“But once we got the skill (in Grigorenko), Girgensons I thought (made) a real good package,” he said. “So that first day you walk away with two guys you really like, you’re really happy.”

Regier’s deal upset some of his counterparts.

“Darcy being able to pull off that trade with Calgary, I think a lot of general managers … were kind of mad at him because he stepped up and took (Girgensons), because they were all ready to take him,” Devine said. “It was a good combination.”

“I’m not sure if it’s the influence of maybe the (Stanley Cup champions) L.A. Kings, their size, the playoffs,” Devine said about the size drafted. “We really had a theme here the last couple months: bigger, faster, tougher.

“I don’t know if we went out here to get this size, but (with)… some of the (smaller) players we have in our organization now … we’re trying to stay away from those guys until the outlook of our team changes a little bit.”

“It’s a lot tougher for a winger to play center,” he said. “If there’s good wingers, you should draft good wingers. But if you can draft centermen that are high quality, I would argue that’s a good way to go and they can go play the wing.”

The Sabres would’ve considered a forward in the second round. McCabe, however, “was too high up on our boards,” Devine said.

McCabe, who’s returning to the Badgers for his sophomore season, calls himself a “two-way defenseman.”

McCabe likes to model his game after New York Rangers defenseman Dan Girardi, one of the NHL’s best.

“He wears a letter,” McCabe said. “He plays a lot of minutes. … I really like his style of play.”

McCabe credits much of his development to Rolston.

“One of the biggest things for me, each and every day he taught us to be a pro,” McCabe said. “Present yourself like a pro. Play like a pro. Eventually it’ll translate. … He’s a great guy.”

“I think it’s quiet in advance of the unrestricted free agent market,” Regier said. “Maybe it’ll pick up next week.”

Some unmoved stars rumored to be moving, most notably Columbus’ Rick Nash, could be slowing the market.

“There’s no question there’s a domino effect here,” Regier said. “The tendency is when one player moves others will move.”

Free agency opens a week from today. Even with the uncertainty surrounding the expiring collective bargaining agreement, Regier figures “it’ll be just like other July 1.”

Still, the CBA has some impact.

“I don’t think it’ll affect the top players,” Regier said. “But there’s some consideration to it, really more the unknown to it. I think it’s pretty difficult to predict the outcome.”

Regier said the Sabres could add a winger. They haven’t focused on trading for the rights of an unrestricted player like last year with defenseman Christian Ehrhoff.

“It may be a possibility,” Regier said. “There’s nothing in the hopper right now.”