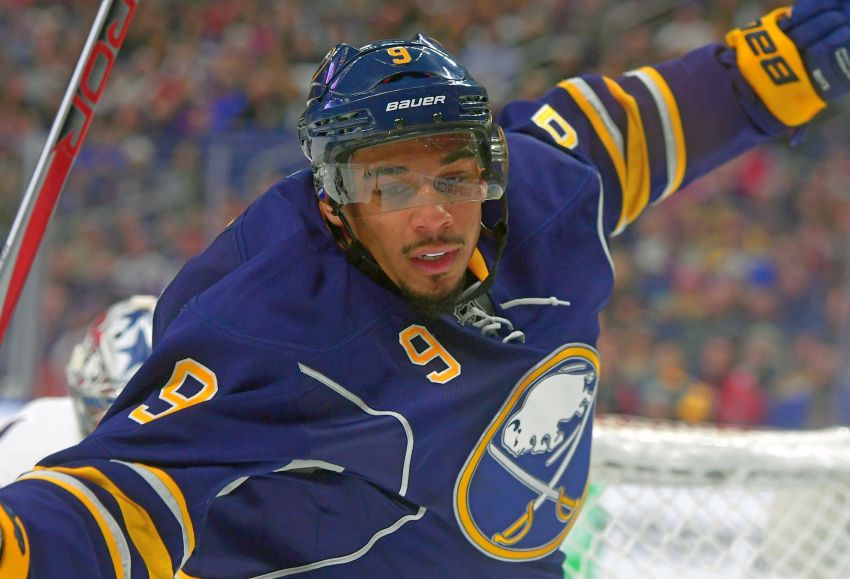 A livid Falk then shoved Kane before some coaches intervened. The Sabres, who host the Columbus Blue Jackets on Thursday, finished the memorable practice shortly after Falk’s outburst.

About 30 minutes after the incident, Falk, who perhaps got this stick a little too high battling Kane and heard about it, was still riled up.

Unlike Falk, Kane seemed unfazed by the scene. He also downplayed it, saying it occurred in “the heat of the moment.”

“It’s guys kind of trying to push each other, make each other better,” he said. “I think that’s part of the game and you see it from time to time.”

Still, it rarely happens during a practice session, although Kane and defenseman Josh Gorges slashed each other and exchanged words last season.

So did Falk and Kane talk to each other and set the record straight? Falk replied he hadn’t even taken his equipment off.

“I have an appointment at the library to read to a couple kids here in a half hour, so I kind of have to get going,” he said.

Kane, who has an expiring contract and could be traded soon, said: “I really don’t think it’s that big of a deal as you guys are making it out to be. It happens more often than maybe you guys see.”

The Sabres are a mess. This disastrous season is quickly becoming the most disappointing in the franchise’s 47-year history.

Perhaps Housley’s strong words – he also challenged the Sabres to play better for their fans – and Falk’s anger can spark the hapless club.

“It’s good to see some emotion,” Housley said of Wednesday’s incident. “It was a pretty battle-(heavy) practice out there focusing on some areas that we need to improve on, some tempers flared up. But it was just more about being in the heat of the battle and guys being frustrated where we are.”

Sabres winger Jason Pominville said: “I liked seeing that today. It was good.”

The Sabres are in last place and rank 30th in the 31-team NHL for a myriad of reasons. They’ll likely never showcase much improvement until they fix their porous defense.

“There really isn’t a big difference between some of the best teams and lower teams and the teams at the top,” Pominville said. “(Top teams) understand how to work and how to play the right way and to defend. And yes, they’ll get the puck more often, they’ll make their plays. But it starts with keeping the puck out of their own net.”

Housley, of course, has been preaching what he said Tuesday all season. Teams with a new coaching staff and a slew of fresh players like the Sabres aren’t expected to mesh overnight.

But the Sabres have played 43 games. Why hasn’t the message sunk in?

“We’re saying all the right things, but we got to do it,” Pominville said. “It’s everyone. … It’s understanding the details that it takes on a daily basis to win games. … It starts with habits in practice.”

Falk said: “We’re all just getting impatient trying to figure out how to get things changed here.”