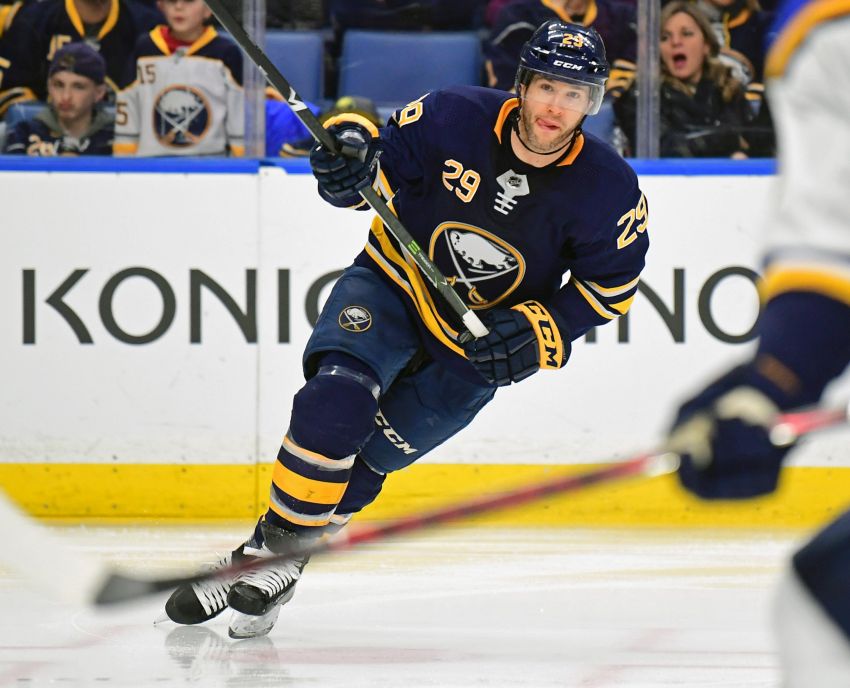 BUFFALO – For a few weeks earlier this season, Sabres winger Jason Pominville seemed to be defying age. The likable veteran, 35, roared out of the gate, scoring two goals opening night. He followed up with another two-score outing days later.

By the 12-game mark, Pominville had compiled six goals and 12 points. The production increase made sense.

On a loaded Minnesota Wild team a year ago, Pominville scored all 13 of his goals and 40 of his 47 points at even strength. He produced offense in a third- or fourth-line role playing fewer minutes than he ever had.

So it wasn’t crazy to think Pominville could post strong offensive numbers this season in a first- or second-line role while playing on the power play.

In October, the seven-time 20-goal scorer thought he might enjoy one of his better years.

“Got off to a really good start,” Pominville said Monday inside KeyBank Center.

Pominville, however, has struggled since then, scoring just three goals in the last 40 contests. He has a nine-game goal and point drought entering tonight’s home tilt against the Anaheim Ducks.

“I feel fine,” said Pominville, who was reacquired in June.

Not surprisingly, Pominville’s role has changed and his ice time has dropped. Instead of playing beside top center Jack Eichel, he has moved to the third line. In Thursday’s 4-2 loss to Florida, Pominville played a season-low eight minutes, 55 seconds.

What has happened? Is age catching up to the Sabres’ oldest player? Perhaps.

The NHL has morphed into a young man’s league. These days, 31 or 32 is considered old. Pominville has already defied the odds by thriving into his mid-30s.

“His minutes have dipped down a little bit, so his opportunity isn’t as much as he’s used to when he was playing up there,” Sabres coach Phil Housley said. “We’re looking for balance from all our lines. I think one of the things he’s trying to do better is get to the net. I think he’s got to continue to do that.

“When he’s got opportunities to shoot pucks, he’s got to shoot pucks. When you find yourself in these situations, the bottom line is just trying to work yourself out of it.”

Pominville, of course, is hardly alone in his offensive struggles. The Sabres have scored the fewest goals overall (117) and five-on-five (71). Last season, the Wild scored the most five-on-five goals in the league.

So Pominville has gone from one extreme to the other.

“Everyone on the team had pretty much career years,” Pominville said. “You’re not going to see that that often.”

In good times and bad, Pominville said he doesn’t think about his offense.

“I’ve always been that way,” he said. “Even when I was putting up 70 or 80 points (in a season), I didn’t really think about the offensive part that much. I always knew if I did the right things, it would come – and I still think that way. I still believe if you put the effort in, have good habits, do the right things, it usually will come.”

Pominville, whose two-way play has usually been his hallmark, believes the reliability he has showcased in other facets – on and off the ice – has remained strong.

Housley said: “He has a lot of pride as a player. He wants to contribute offensively.”

Pominville, who has scored nine goals and 20 points in 52 games this season, practiced at right wing beside center Evan Rodrigues and Scott Wilson on Monday, a third line that would be most teams’ fourth trio.

“There’s a lot of young guys that are here, guys that are signed for long term … so I’m fine playing wherever they put me,” Pominville said. “I won’t say a word, I’ll just go out there, whenever my name’s called I’ll go out there and do my best in any position I’m in. Whatever ice time I get, I’ll keep doing my thing.”

One thought on “Sabres’ Jason Pominville struggling to produce offense”