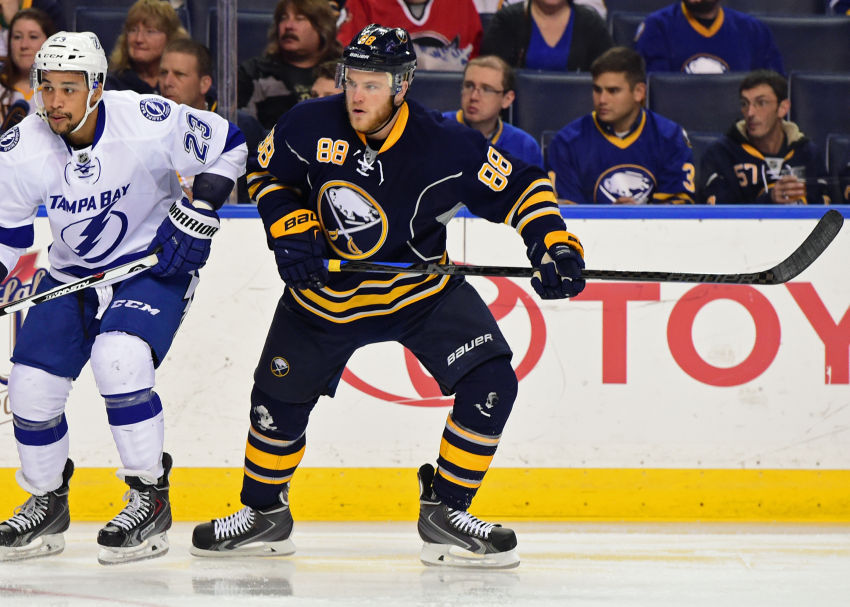 BUFFALO – Growing up in Fergus, Ont., a community of almost 20,000 about two hours west of Toronto, the McGinn boys made everything into a competition.

Forget about hockey or lacrosse, the sports they played regularly. Sabres winger Jamie McGinn and his brothers, Tye, a Tampa Bay Lightning winger, and Brock, a Carolina Hurricanes winger, competed over trivial things like who had the best hair or even a Frisbee toss.

“I think it even started at the dinner table with who could eat the fastest, because if you didn’t get it in you right away, you missed out on the leftovers,” Jamie McGinn said Thursday prior to the Sabres’ 4-1 loss to the Lightning inside the First Niagara Center.

Clearly, that competitiveness help buoy the McGinns’ hockey careers. With Tye and Brock having recently earned promotions, all three are in the NHL right now.

“All three of us want to win,” Tye McGinn said. “It’s always competitive. That’s what helped us get to where we are.”

Only the Staal family – with Eric, Jordan and Marc – has three brothers in the league.

“Amazing, proud big brother right now,” Jamie McGinn said. “It’s almost surreal, just the likelihood of one kid coming from a small town to make the NHL is very rare and hard to do.”

Jamie, 27, has been a regular since 2008-09. Tye, 25, a healthy scratch Thursday, cracked the league three years ago and was recalled Sunday. Brock, 21, has played his first nine games this season.

“It’s amazing,” Tye McGinn said. “Not many people get to experience that. Me being in the middle, it’s kind of cool seeing your older brother achieved what he’s achieved. To experience your younger brother, it’s something I can’t express in words. It’s phenomenal.”

When the Lightning summoned Tye McGinn, he noticed Tampa Bay was heading to Raleigh.

“I called Brock right away, and he was just as happy as I was,” Tye McGinn said. “I got to spend some time with him, which was awesome. … I looked further into the schedule, and it was Buffalo on the agenda as well. I called Jamie right after that, and he was just as excited, too.”

Jamie faced Tye last season when his Colorado Avalanche played the Arizona Coyotes. Tye and Brock had never played each other in the NHL.

What’s it like seeing your brother on the ice in the heat of battle?

“It was definitely different,” Tye McGinn said. “I’d catch myself sometimes checking to see how he’s doing on the ice.”

The McGinns credit the sacrifices their parents, Bob and Cori, made to give their boys a hockey career. Jamie McGinn joked the stress gave his father gray hair.

“I give them all the credit in the world, because having three boys in hockey, traveling all over the country is pretty amazing for them to stick through it and never be able to say no,” he said. “They just did it because they knew we wanted to play and they did whatever they could to make us to be able play, not knowing if we were going to make a dollar in this game. They just wanted to see us happy.”

The parents, who watched from home Thursday, don’t choose sides when their sons play. They just enjoy the game.

“It’s a big moment for them as much as it is for us,” Jamie McGinn said. “They cherish these moments. It hits in the heart, for sure.”

The Sabres made one lineup change Thursday, inserting defenseman Mike Weber, a healthy scratch two games, for Carlo Colaiacovo, who has an upper-body ailment.

Sabres coach Dan Bylsma said Colaiacovo, who practiced Wednesday, has been dealing with bumps and bruises.