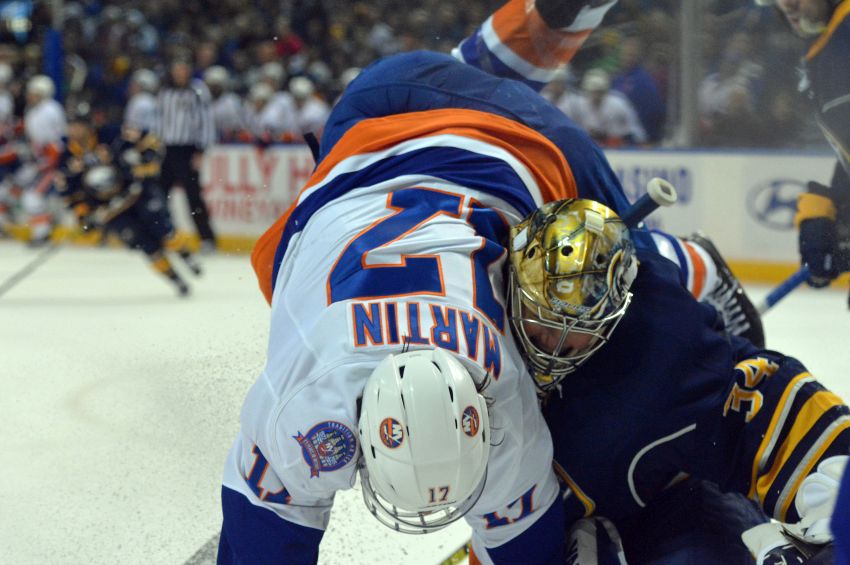 BUFFALO – Even by Sabres standards, it was ugly. Almost 32 minutes into Sunday’s 3-2 loss, the New York Islanders led by three goals. The Sabres, meanwhile, had five shots total and zero in the second period to that point.

Then, like so many other times this season, they got going. After Sabres coach Ted Nolan called a timeout, Marcus Foligno buried Nikita Zadorov’s rebound.

Just like that, the Sabres had two shots in about two seconds.

Drew Stafford scored a couple of minutes later, zooming in and tucking the puck past goalie Jaroslav Halak’s right pad.

The Sabres shot 66 percent during the second period, converting two of their three shots. Too bad they only had two more shots the rest of the contest.

They sprinkled only 10 shots on Halak, tying the franchise-low total they set in a 4-0 loss Oct. 28 in Toronto.

“Just all around, it wasn’t a sharp game for us start to finish, just too antsy with the puck,” Sabres captain Brian Gionta said. “We never settled things down, and it showed, nothing was crisp.”

Nolan added: “You got to get more shots and more traffic at the net. Tonight, for whatever reason, we just didn’t have it.”

The Sabres had won two of three games and looked sharp in their lone loss. However, a day after beating Dallas 3-2, they regressed badly before the 18,900 fans inside the First Niagara Center.

“We haven’t had a game like that in a while,” Stafford said. “It’s one of those things, back-to-back games, I think we need to be a little bit more simple with the puck maybe, shorten our shifts up. … I think it’s just more little details.”

The Sabres, who rallied from three goals to beat the Isles Dec. 27, had very few details in their game Sunday, looking disjointed throughout their 38th loss. Their passing was atrocious, helping them finish with fewer than 20 shots for the 16th time this season. They couldn’t break out of their own zone.

Still, Stafford thought the Sabres had more than 10 shots.

“I don’t know about the shot clock there,” he said. “I looked up and I saw two in the (third) period. I don’t know, I thought we might’ve generated more.”

It’s worth noting the shot Chris Stewart took on his breakaway in Thursday’s 3-0 loss to St. Louis – goalie Jake Allen clearly made a save – was never counted in the official box score.

“It’s up there obviously for a reason, for reference,” Stafford said about the shot totals. “But I’ve noticed sometimes this year we seem to be on the short end of the stick on the shot counts. It is what it is. It’s up there, and obviously we’re not generating shots.”

The Isles generated plenty, pumping 31 shots on Sabres goalie Michal Neuvirth, who started for the first time since Jan. 17.

After the Isles’ Casey Cizikas manhandled Tyson Strachan down the left wing, Colin McDonald scored late in the first period. With Tyler Myers off for an ill-advised slashing penalty, Anders Lee’s power-play goal made it 2-0 halfway through the second period.

Myers had three minor penalties and played only 19 minutes, 26 seconds – just the third time all season he has skated under 20 minutes.

Following a bad icing by the Sabres, Mikhail Grabovski scored later in the second period.

Both teams finished a stretch of three games in four nights. The Sabres spent that stretch at home. The Isles played on the road.