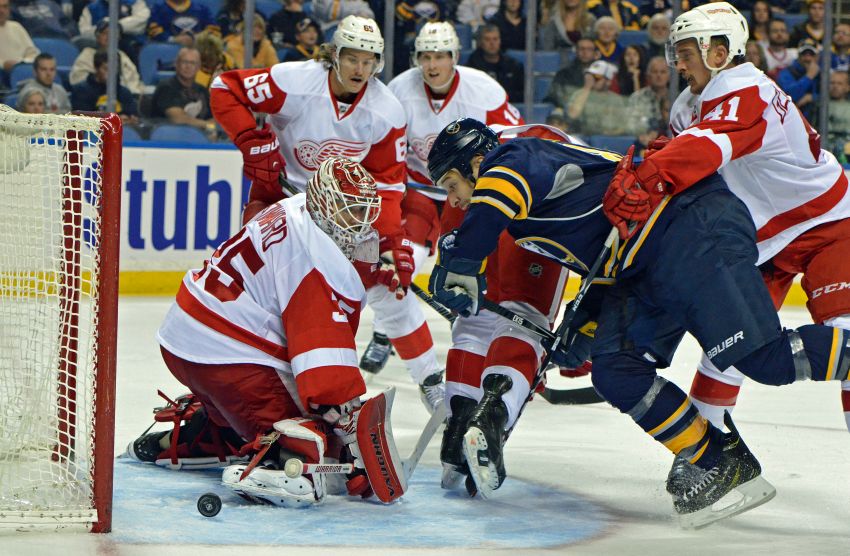 BUFFALO – Slowly, Sabres coach Ted Nolan believes, his message is sinking in. Following Sunday’s unlikely 3-2 shootout win against the Detroit Red Wings, he pointed out his Sabres are 2-2-1 in their last five games.

Of course, the Sabres lost those two contests by a combined score of 9-0.

Against one of the league’s better teams, the Sabres hung tough, taking an early lead before tying it late. In between, they often looked overmatched, running around in their own end chasing the Red Wings.

But in the end, they beat a superior opponent for their first home win. Triumphs like that create belief.

“Work alone does not turn this around,” said Nolan, whose club was trounced 5-0 on Saturday in Pittsburgh. “Work with a strong belief factor, it happens. It can’t be just work. It has to be belief that you’re doing the right things. If you do the right things consistently, things will turn.”

Things turned 13:08 into the third period, when Chris Stewart’s gritty goal, his first with the Sabres and this season, tied it at 2. The struggling winger fought ferociously in close to score.

“I almost thought about head-butting it in,” joked Stewart, who hadn’t scored since Jan. 9, a 33-game stretch.

The puck took a couple of favorable bounces before trickling by Detroit goalie Jimmy Howard.

“That’s what we talked about going into third, in the second I thought we put down our heads a little wee bit like we did before, but we rose them up a little bit quicker this time,” Nolan said. “It’s part of that process. We need guys like Stewart to do exactly that for us.”

Stewart, who has two 28-goal seasons, said the “first one’s always toughest to get.”

“Hopefully,” he said, “they keep coming.”

Earlier in the game, the puck slipped off Stewart’s stick in front.

“That’s the way thing have been going,” he said.

The Sabres got some breaks, however.

“I was talking to the ref a couple times during the game,” Neuvirth said. “He told me, ‘I know he’s standing in the crease. When they score a goal, I’m going to disallow it.’ I was glad he actually did it.”

Neuvirth looked strong throughout his fifth start, stopping 36 shots, including five in overtime.

Brian Flynn’s first goal in 25 games opened the scoring 6:55 into the second period. After the Red Wings held the puck in the Buffalo zone more than a minute, Tomas Tatar tied it at 12:55.

“That’s where the urgency comes in,” Nolan said. “On three occasions on that shift, we had the full possession of the puck, we could’ve got it out.”

Then Pavel Datsyuk put Detroit up 2-1 4:27 into the third period.

Neuvirth’s 16 saves during the third kept the Sabres in it.

“We can’t sit back on our heels, we got to get on our toes,” Stewart said.

They got on their toes late, a sign they could be turning a corner.

Sabres defenseman Tyson Strachan, who had two assists, added: “It’s a results-based business. It’s been a tough stretch. To get two points however we could get them is huge. It’s nice to see the guys smile a little bit.”

“I think that one probably felt as good as anything, just to be able to give them a little bit of a salute,” Strachan said.