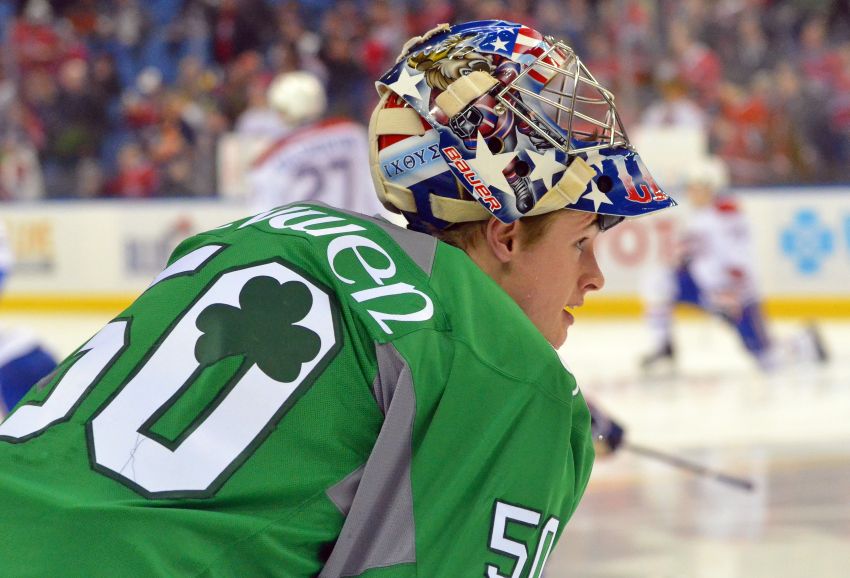 BUFFALO – The good news for the injury-riddled Sabres?

Starting goalie Jhonas Enroth, knocked out of Sunday’s 2-0 loss to Montreal with an apparent right leg injury, could play again this season. The Swede won’t accompany the Sabres on their five-game road trip, however.

“It looks at least a little bit better today than it did yesterday,” interim coach Ted Nolan said today inside the First Niagara Center before the Sabres left for Calgary.

The Sabres could still recall another goalie, Nolan said. Right now said, they have rookie Nathan Lieuwen, who replaced Enroth, and Michal Neuvirth, who’s still day-to-day with a lower-body injury.

If the Sabres need another goalie, they would likely recall Matt Hackett from Rochester.

Lieuwen, fresh off his NHL debut, his third game in three nights, is traveling with the Sabres.

“It’s not too bad, actually,” Lieuwen said about his physical condition. “Usually after three in three you’re a little more tired and sore. But I actually feel really good and I feel like I have energy and I feel like the adrenaline’s starting to ease off a little bit.”

In other injury news, defenseman Tyler Myers (arm) is staying back but could join the Sabres later.