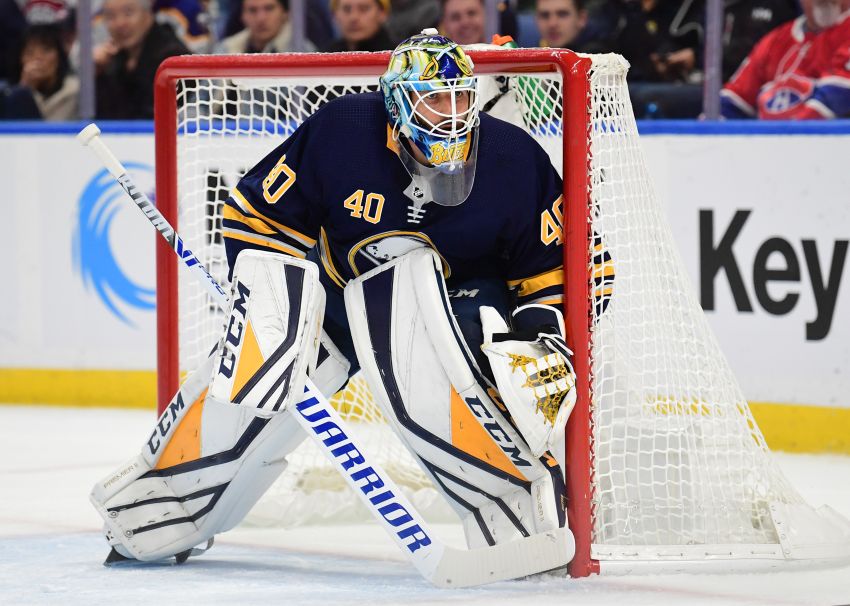 BUFFALO – After an upper-body injury forced him to miss Saturday afternoon’s 6-2 home loss to Philadelphia, Sabres goalie Carter Hutton was back practicing this morning inside HarborCenter.

Coach Phil Housley said he “definitely” expects his No. 1 netminder to return this week. The Sabres host Los Angeles on Tuesday and Arizona on Thursday before playing road games Saturday and Sunday.

“It was good to see him back battling,” Housley said inside KeyBank Center. “He looked like his old self back there. He was glad to be back on the ice after this little stint.”

Hutton said of his absence: “Just a little maintenance, little banged up. We’ll be alright.”

In other news, the Sabres who have lost five straight contests (0-3-2) after their 10-games winning streak, only made minor tweaks to the forward lines today.

Kyle Okposo took Jason Pominville’s spot at right wing beside center Casey Mittelstadt and Conor Sheary. Meanwhile, Pominville skated beside center Vladimir Sobotka and Tage Thompson, who had been on the fourth line.

Check back later for a story on the Sabres’ lack of secondary scoring.