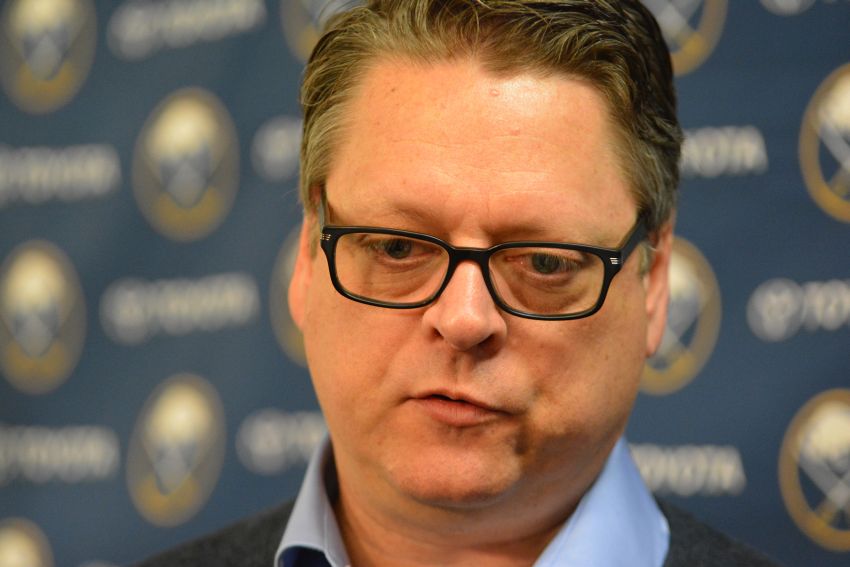 BUFFALO – Here are some highlights from Sabres general manager Tim Murray’s chat with the media after making four deals before the 3 p.m. trade deadline.

On what type of day it was:

“Was it a good day? It’s never a good day to give good people away. I talked to them all. They all understand and are somewhat happy with their situations.”

On what the Sabres acquired:

“We just acquired assets, future assets. That’s how we made the team better.”

On the goalie duo of Johnson and Anders Lindback, perhaps the NHL’s worst:

“Anders hasn’t played here yet. Johnson had a good season with Boston, he had good numbers, good analytics numbers. He hasn’t had a good year on Long Island. But he’s a guy I think most teams, certainly the teams he’s been with, think is a legit backup. He’s not old. I don’t know if he has the ability to be a starter. I guess depending on how Teddy (Nolan) wants to divvy up the games between now and the end of the year we’ll find out.”

On the rest of the season:

“If we finish 28th, that’s where we’ll pick. I assume the players that we have here will try to win every game. I assume the coaching staff will try to win every game. They’ve never had any interference from me, from Day One. The players have never been told by me to not win. There’s never been any talk about that. The only talk I get about that is from the press. We just don’t talk about that.

“I mean, good example of that, I guess, if there’s any question about it is Neuvirth was playing well and started (eight) games in a row. If everybody in here … thinks that Neuvirth is a much better goalie than Lindback, then we were trying to lose every game, we probably should’ve been trying to play Lindback. But that’s not what we’re doing.”