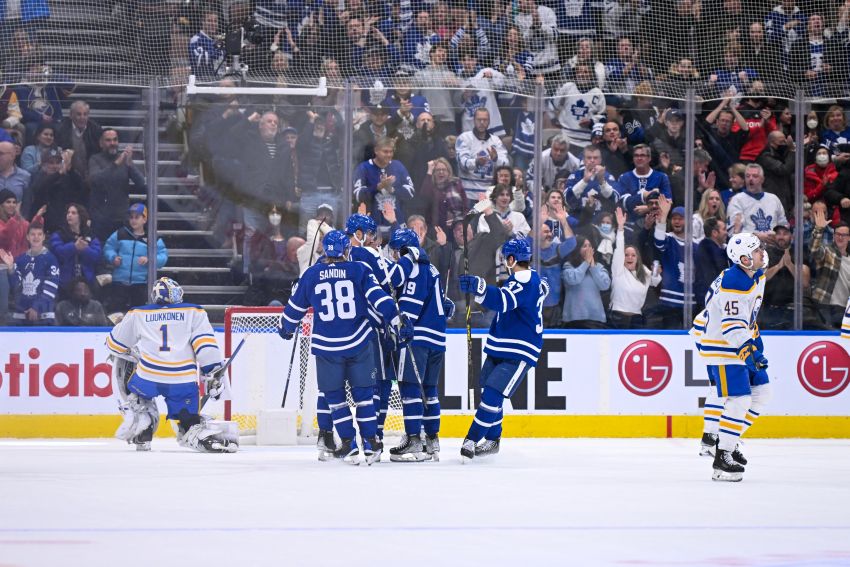 Toronto celebrates one of its goals in Saturday’s 5-2 win over Buffalo. ©2022, Micheline Veluvolu

TORONTO – A frustrated Don Granato kept talking, expounding for two and a half minutes on the Buffalo Sabres’ recent lack of competitiveness following their eighth consecutive loss.

“It’s pretty simple,” the coach said after Saturday’s uninspired 5-2 setback to the Maple Leafs. “You compete, you play with energy and you’ll feel better about your game. And I think right now, you don’t feel good about your game because you’re just not going hard enough, with enough determination.”

The Sabres showcased plenty of determination in roaring out to a 7-3-0 start and even early during their skid. But in recent games, their work ethic has often vanished, and opponents have throttled them.

In Saturday’s loss before 18,645 fans at Scotiabank Arena, the Sabres enjoyed a solid opening 10 minutes. Then center Riley Sheahan took an offensive-zone hooking penalty, and John Tavares’ power-play goal opened the scoring 12:58 into the game.

The contest was over before the first period ended.

“It boils down to compete,” Granato said. “We didn’t have enough guys competing hard enough at the start.”

Granato, of course, delivered that strong message to his reeling team following the game.

“Get back to work,” Sabres defenseman Rasmus Dahlin said of Granato’s words. “That’s the only thing we can do now. We can’t look back. We got to dig in now, we got to work our butts off.”

He added: “When it’s not bouncing your way, you got to work even harder, so we can’t think about it. Tomorrow we have a practice and we got to work, it’s got to be my best practice of my life. I need to step up, the team needs to step, and it starts with practice, practice habits.”

The good news, Granato believes, is some of the Sabres’ top talents – he named Dahlin, Thompson and center Dylan Cozens – haven’t lost their tenacity.

“Three guys that stick out to me as tremendous competitive players each and every night,” he said. “They were very competitive tonight, but we didn’t have enough with them early.”

Thompson, for example, created winger Alex Tuch’s power-play goal halfway through the game by racing to a loose puck and utilizing his 6-foot-6 frame to bump Jarnkrok off it.

“Dahlin is competing like mad, obviously,” Granato said. “Thompson, I said, has become a beast. So going through this, those guys have elevated their game. So that is actually a good thing that’s occurring through this messy situation is you’ve got guys (ticked) off. And otherwise they wouldn’t. You’re winning, they wouldn’t be (ticked) off. So we’re seeing Dahlin, Thompson and Cozens, those three guys tonight to me that are elevating, they’re actually getting better because of this.

“So just keep pushing and I’m confident we’ll resolve this and be better because of it.”

Granato said the Sabres, the NHL’s youngest team, are “finding out how to dig down.”

“With a younger group, they might be a little puzzled, but they don’t have this belief, they don’t have (the), ‘Here we go again (mentality),” he said. “They’re determined. They believe they can do it, even though they haven’t figured it out yet. But I don’t want them to get too far away from just the compete end. And that’s what’s happened.”

As Giordano was about to enjoy a prime scoring opportunity in front of Sabres goalie Ukko-Pekka Luukkonen, Tuch raced back and dove toward the net, knocking it off its moorings as the puck slid past the goal line.

At first, Tuch officials assessed a delay of game penalty.

But following a video review, they “determined that the puck crossed the Buffalo goal line between the normal position of the goal posts and that Mark Giordano had an imminent scoring opportunity prior to the goal posts being displaced,” according to the NHL.

Tuch said he had never seen a goal like that.

“I was backchecking and dove to try to put some pressure on him and I tried to stop myself from going into the net and I fell into the net,” he said.

Notes: Granato said the Sabres are “hopeful but it’s not definitive yet” center Tyson Jost, who was claimed on waivers Saturday, will join the team today. Dahlin on his his play right now: “I’m trying too much, I think. I got to keep it simple, short shifts, take the chances when I have them, not force it.” … The Sabres made one lineup change, inserting defenseman Casey Fitzgerald for Lawrence Pilut. Fitzgerald had been scratched two straight games and three of the last five. … Luukkonen made 18 saves in his first NHL outing this season … Center Casey Mittelstadt scored the Sabres’ other goal, a power-play tally. … With captain Kyle Okposo and alternate captain Zemgus Girgensons injured, Thompson and Tuch each wore an ‘A.’