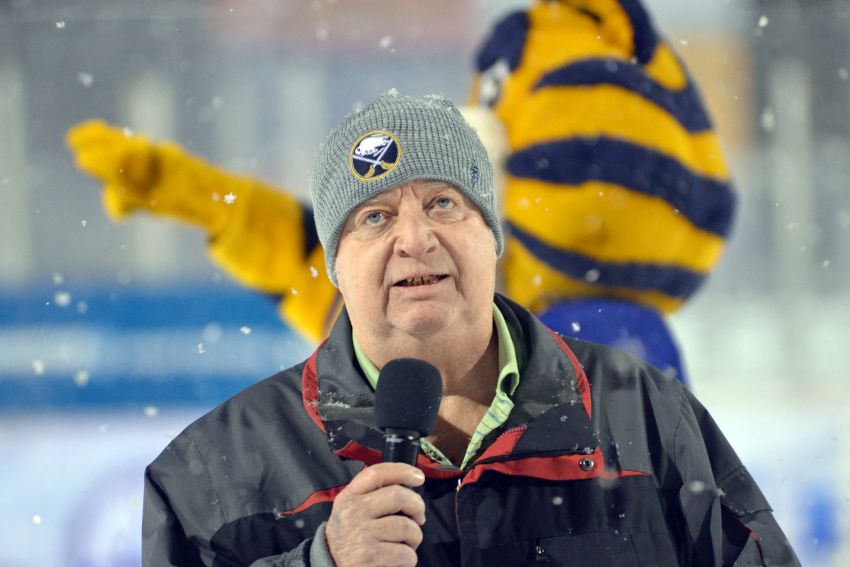 BUFFALO – To winger Patrick Kaleta, who grew up in nearby Angola listening to Rick Jeanneret call games, the greatest perk of playing for the Sabres isn’t money or prestige.

“One of the best, if not the best thing about being a Sabre is hearing your name called by Rick Jeanneret,” Kaleta said Friday inside the First Niagara Center. “I still get chills listening to some of stuff on YouTube.”

So whenever Kaleta needs to “get pumped up,” he listens to the legendary play-by-play man, who will return tonight, call some famous goals.

“I’m just happy and privileged to have my name called by him,” said Kaleta, who used to turn down the television to listen to Jeanneret on the radio.

In an otherwise glum season, Friday was a special day. The Sabres announced Jeanneret, who said last week he’s cancer-free, would call the first period of tonight’s game against the Toronto Maple Leafs.

Jeanneret has been sidelined all season battling throat cancer.

Kaleta called Jeanneret a “true role model in what he’s gone through and what he’s battled.”

Kaleta and Myers both kept in contact with Jeanneret over the last several months.

“I got to be playing my (physical) style of play,” Foligno said. “Didn’t do it last game, and just needed some time to group it together and come back stronger.”

Nolan seemed shocked the Sabres came out so flat against Edmonton last Friday after Jeanneret and Hall of Fame Buffalo Bills quarterback Jim Kelly, who recently announced he’s cancer-free, spoke to the team.

“There’s no bigger inspiration than when Jim Kelly walks in your room with Rick Jeanneret,” he said. “You can’t get two bigger sports figures, especially with the Buffalo area. I thought for sure we’d come out flying, just for that sake. Different strokes for different folks. That would inspire me.”

The Sabres lost 3-2 to the Oilers.

One thought on “Sabres excited to have Rick Jeanneret back: ‘A pretty special moment’”