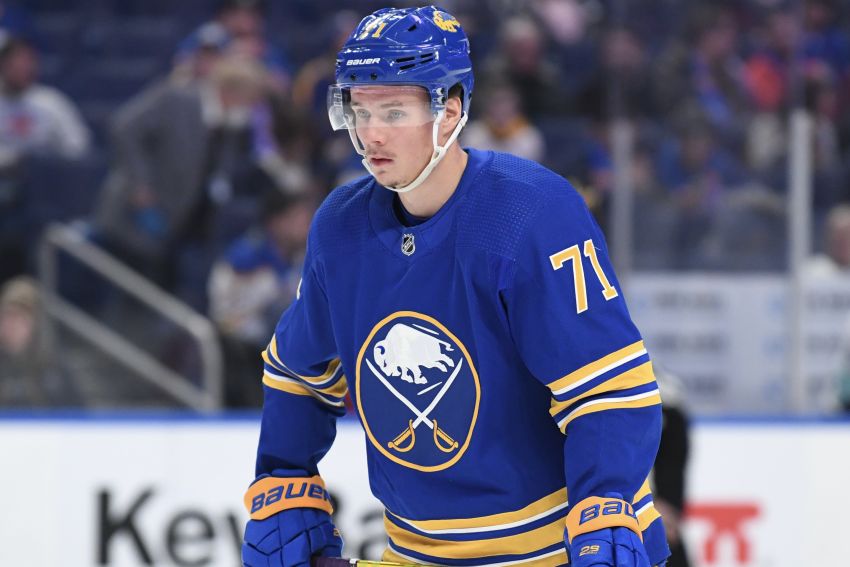 Victor Olofsson believes everyone on the Sabres can do better. ©2021, Micheline Veluvolu

After Saturday’s 6-2 loss, the Buffalo Sabres have allowed 20 goals during their three-game losing streak. They’ve given up at least five goals in seven of their last nine contests and 46 total – a whopping 5.1 an outing – during that stretch of futility.

Having been scored on 90 times through 24 games, they’re on pace to give up 308 goals, a stunning number would tie the franchise’s all-time mark for most goals against in a season set by the 1986-87 team in 80 games.

“We’ve got to look at ourselves in the mirror,” winger Victor Olofsson said on a Zoom call following the Sabres’ 11th straight loss to the Carolina Hurricanes. “I think everyone in that locker room can do better. I know I can do a lot better. Our game right now, we just got to watch film and see what we can all do better just to help the team.”

They certainly did not help Malcolm Subban in his Sabres debut. Subban, who let in the first shot he faced, was consistently hung out to dry inside PNC Arena.

Early in the third period, with the Sabres down 5-2 and enjoying a five-minute power-play, Subban made a potentially game-changing stop. After defenseman Rasmus Dahlin mishandled Olofsson’s pass at the point, Subban stymied Sebastian Aho’s breakaway attempt.

But Aho easily grabbed his own rebound beside the net and fed Teuvo Teravainen in front, and he beat Subban uncontested. Dahlin abandoned the front of the net, choosing to pursue Aho. None of the other Sabres made it back into the play.

The short-handed goal, the third the Sabres have allowed during their three-game skid, sealed Carolina’s win.

“We played the game in front of them,” Sabres coach Don Granato said. “And it was an easy transition for them (on Teravainen’s goal), it was in Dahls’ feet and a tough one to handle and we probably should have went behind them, forced them.”

Subban, who was acquired Friday from the Chicago Blackhawks, left the game 9:57 into the third period after he jammed his right foot on the post. Granato did not have an update following game.

Subban stopped 19 of the 25 shots he faced before Aaron Dell replaced him. Incredibly, Subban was the Sabres’ third starting goalie in three games.

If Subban misses time, the Sabres might have to utilize top goalie prospect Ukko-Pekka Luukkonen, who backed up Dell on Thursday. The Sabres sent the Finn back to the Rochester Americans after the Panthers game.

Despite going 0-2 on their brief road trip, Granato believes the Sabres can take something from it.

“Our guys, the nice thing, the silver lining in there, the vibe and feel is our guys take responsibility for their mistakes,” he said. “They also see right away when a mistake happens how they should’ve and could have, how they’re gonna correct it and what they did wrong. They’re identifying with that, which is huge. They’re not making a mistake and losing confidence. They’re actually making a mistake and gaining experience.”

The Sabres made two lineup changes among their skaters Saturday, inserting defenseman Will Butcher for Robert Hagg and winger Anders Bjork for Mark Jankowski.

Granato said Hagg is dealing with an injury. Meanwhile, Bjork played after sitting out Thursday’s 7-4 loss to the Florida Panthers.

Butcher, meanwhile, played after being a healthy scratch five of the previous six games. After a solid start this season, Granato said “some nagging, lingering” injuries have dogged Butcher.

“He lost some confidence as a result,” Granato said prior to the game. “And that took a toll on him. He self-assesses well, and he wasn’t playing nearly as well as he was capable of or is capable of. And I think he’s hard on himself and I think he got down and it complicated things worse because he’s trying to fight through some nagging things. And again, the hope for me today is that he’s fresh, because when he’s fresh, he’s a very intelligent puck-moving defenseman, and it’s just what he need.”

Notes: Sabres center Tage Thompson briefly left the game late in the second period after Vincent Trocheck hit his head into the boards. Trocheck received a five-minute boarding penalty and a game misconduct. Thompson returned for the third period. … The AHL postponed Saturday’s Amerks road game against the Syracuse Crunch due to COVID-19 protocols. The league postponed all three of the Amerks’ games last week. No makeup dates have been announced. The Amerks are scheduled to host the Utica Comets on Wednesday. … Sabres winger Kyle Okposo has recorded two goals and seven points during a six-game point streak. He has a team-best 17 points this season.