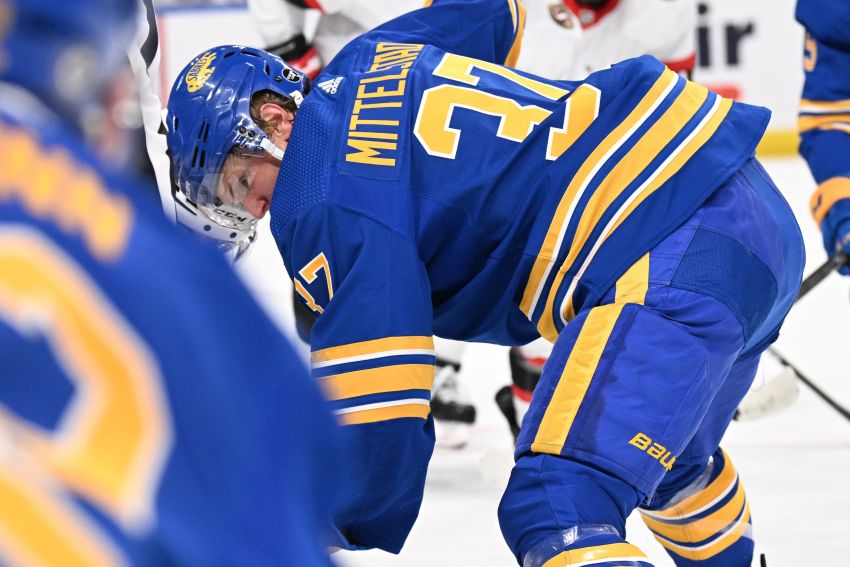 Casey Mittelstadt has mustered just one point at even strength this season. ©2022, Micheline Veluvolu

BUFFALO – Late in the second period of Thursday’s 7-4 loss, Casey Mittelstadt grabbed a short pass in the left circle and darted to the net. When the Sabres center approached the crease on his forehand, it briefly appeared he would shoot.

But Mittelstadt held the puck and, a split second later, he lifted a quick backhander past Vegas Golden Knights goalie Logan Thompson, tying the game at 2.

The slick goal, his second power-play score in the last three outings and ninth point this season, illustrated Mittelstadt’s dynamic offensive talent. Through 14 games, he’s on pace for 53 points, a whopping 28 more than the career high he registered as a rookie in 2018-19.

Mittelstadt, however, has done most of his damage on the power play. So far, he has mustered just one point, an assist, at even strength. He scored his first goal short-handed.

“I don’t worry about Casey in the long run,” said coach Don Granato, whose Sabres host the Boston Bruins tonight at KeyBank Center. “As long as he keeps competing, with his skill set, he’ll resolve the issues.”

The 6-foot-1, 195-pound Mittelstadt said he hasn’t thought much about his meager production at five-on-five.

“Most of the games the chances have been there, quite a bit of zone time, especially the last few games I think I’ve had a lot of chances and a lot of zone time,” Mittelstadt said following Friday’s practice. “So for me, that’s the biggest thing, I’m just going to look at chances and feel like they come in bunches, so I just got to break the seal.”

Mittelstadt might break through if he utilizes his heavy shot with greater frequency. He has sprinkled just 13 shots on goal at even strength. He had 57 in 40 games last season.

For some perspective, fourth-line forward Zemgus Girgensons, who’s cast in a checking role, has registered 13 shots at even strength in 15 minutes less of ice time.

Earlier in his career, Mittelstadt’s underwhelming production at five-on-five likely would’ve been weighing on him. Over his five seasons, however, he has matured, developing a new perspective as he’s battled injuries and other adversity.

“I’ve probably been through some of the lows and let myself get to that point at certain times,” he said. “So it’s a big thing for me, just try to stay even. Every day you’re going to come to the rink, try to get better. If you do the right things, I find that it usually works out. So try to stick to the plan.

“I feel like the chances have been there and that’s a positive thing for me now. I just got to start putting them away.”

“Our job as coaches is to help him pinpoint OK, what tactically, technically can you do to help yourself in the situation?” he said. “His intensity is always good, he’s always ready to battle. So even if he’s fallen off production, he still competes very well.”

Mittelstadt has been moving around the lineup, playing with several wingers, mostly as the second- or third-line center. He briefly moved to up to play left wing on the top line beside center Tage Thompson in Tuesday’s 4-1 loss to the Arizona Coyotes.

If Granato switches Mittelstadt to the wing, a spot he often played two seasons ago and occasionally last year, he has no problem with it.

“I’ve talked to Donny a lot about it,” Mittelstadt said of changing positions. “He’s been pretty open with me saying I’m going to play both and I’m fine playing both. It’s a good mix-up, so … it’s so similar in our system. I mean, first guy back’s going to play center and you’re going to cover for him. So everyone’s kind of interchangeable.”

Mittelstadt with a little how do ya do on Thompson… 2-2 ppg #LetsGoBuffalo #VegasBorn pic.twitter.com/ApJdHOEjYX