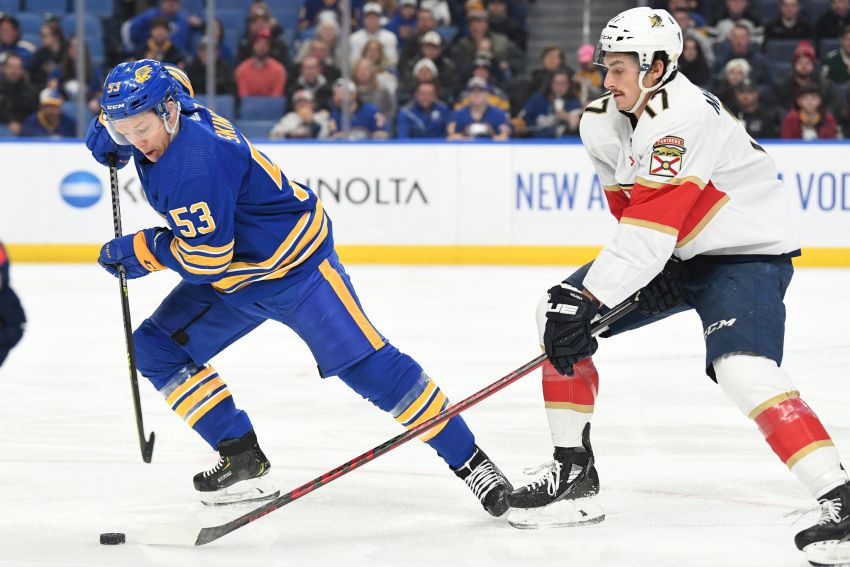 BUFFALO – During Sunday afternoon’s 5-3 loss, coach Don Granato said he heard very little chatter on the bench, an indicator the Sabres, two days removed from an emotional victory, did not feel fresh.

“Entirety of the game, we just couldn’t get the emotional energy,” Granato said after a 5-3 setback to the Florida Panthers ended the Sabres’ eight-game point streak. “It was low. I give our guys some credit for trying to find it and fight, but we just didn’t have that jump, that zip that we have.”

Still, the Sabres’ ability to muster enough energy to take the Panthers to the wire was encouraging before the crowd of 11,787 fans at KeyBank Center.

Fresh off Friday’s stirring banner raising ceremony for legendary play-by-play man Rick Jeanneret and their thrilling 4-3 win over the Nashville Predators, the Sabres seemed due for a letdown.

“A very emotional game,” Sabres winger Kyle Okposo said of Friday’s win. “The last time we had one of those (at the Heritage Classic) we went out in Edmonton and laid an egg (and lost 6-1), and I thought tonight we did a good job of coming out and being ready to play. With a young team, that’s not an easy thing to do, but for the most part, I was happy.”

After falling behind 4-1 in the second period, Sabres winger Jeff Skinner and center Tage Thompson scored power-play goals in a span of 1 minutes, 56 seconds, midway through the third period. It felt like the Sabres might force overtime and at least earn a point.

Then Thompson and defenseman Mattias Samuelsson were whistled for penalties in the final three minutes. Mackenzie Weeger’s late power-play goal sealed the game, and the Panthers’ 48th victory this season clinched a playoff spot.

“If it wasn’t for the two penalties late, the game could have got tied up and been really interesting,” Granato said. “I mean … we definitely were able to swing momentum. Credit to the guys on the power play, the guys to dig in and fight.”

Against the Panthers, opponents must fight the entire game. The NHL’s highest-scoring team also field’s arguably the deepest lineup.

Okposo’s goal 17:13 into the game, his 18th this season, opened the scoring. Then the Panthers throttled the Sabres in the second period, scoring three times and pumping 22 shots on goalie Dustin Tokarski.

“In the second period, we just backed off,” Okposo said. “We just stopped skating, stopped going after them. Other than that, I thought we did OK.”

“You just have to give them an inch and they’ll take it,” Okposo said. “We just got a little loose there in the second and they took advantage. (Tokarski) made some great saves to make it 1-1 for a long time and then the dam kind of broke.”

It remained tied for nearly eight minutes and the Sabres made a game of it in part because of Okposo and his linemates, center Cody Eakin and Zemgus Girgensons.

“As experienced guys, they know how to get something out of it even though they were drained emotionally,” Granato said. “They just pushed. I think Girgensons finished a check that (said), ‘OK, I might not feel my game, but I can finish this hit and finish it hard.’ They just kind of got the rest of the group going and pushed. I thought it was a real credit to them.

“Our group of D, we were hesitant, all of us, which is very uncharacteristic of the six guys we had in tonight on D. So I think we were fighting ourselves more than anything they did, although I don’t discredit they’re a great hockey team.”

Granato believes Thompson, who hit the 30 goal-mark for the first time Friday, possesses the talent to reach an even higher number.

Thompson, who scored 18 goals in his first 145 NHL games, reached the prestigious number in his 65th outing this season.

“It feels awesome,” Thompson said. “Obviously, a lot of the credit goes to the teammates and the opportunity I’ve been given by Donny, playing in all situations. I think it’s a really rewarding feeling. Obviously, the first couple years of my career I had to grind a little bit there and find my way. I feel like I’m starting to get my footing in the league.”

Notes: The Sabres used the same 18 skaters for the second straight game, scratching winger Anders Bjork, defenseman Will Butcher and winger John Hayden (all healthy). Bjork has sat out 14 straight games. … The Sabres also scratched defenseman Colin Miller, who has left the NHL’s COVID-19 protocol and began skating on his own. … Huberdeau’s second-period goal was his 97th point, a new single-season Panthers record. He has recorded a whopping 73 assists this season, an NHL record for a left wing. … Veteran forward Joe Thornton returned to Florida’s lineup Sunday, skating as a fourth-line winger. Thornton, 42, played his first game against the Sabres on Nov. 20, 1997. … Ex-Sabres defenseman Robert Hagg, who was traded March 20, played for Florida.