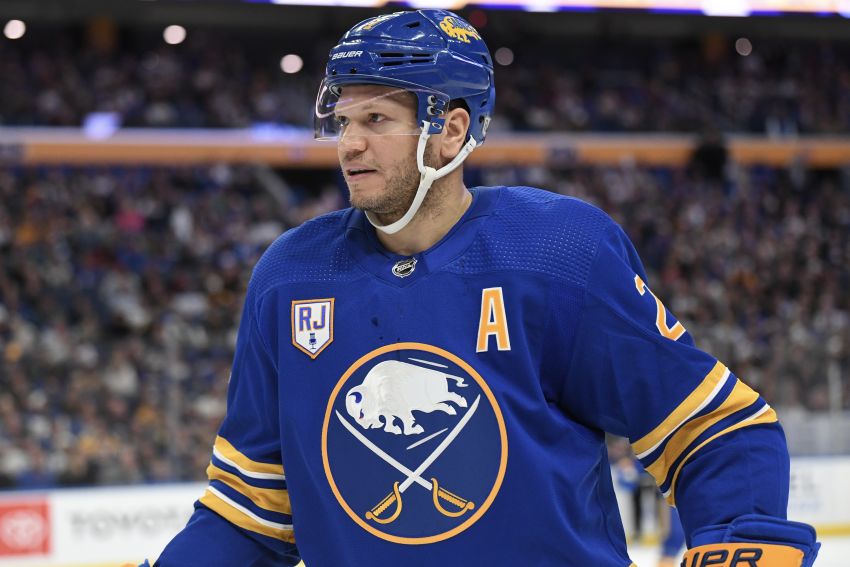 BUFFALO – In the third period of Friday’s emotional win, as the raucous capacity crowd celebrating Rick Jeanneret and the upstart Sabres began doing the wave, winger Kyle Okposo said he saw his teammates looking around and soaking up the excitement.

Then Okposo, a 15-year veteran, turned to center Dylan Cozens, who’s in his second season.

“I just looked at Cuzzy and said, ‘This is the National League,’” Okposo said after the Sabres prepared for this afternoon’s game against the Florida Panthers. “He was a rookie last year, no fans, and he hadn’t seen the building like that. So it was pretty special.”

It was so special that Okposo, who has suited up for the Sabres 369 times, decided the thrilling 4-3 victory over the Nashville Predators ranked among his top three games with Buffalo. Then he changed his mind.

“I quickly went into probably the most fun that I’ve had in this rink,” he said. “It was just everything, from the ceremony before (for Jeanneret), the ovation that he got right away was just incredible.

“And, obviously, kicked off the night to a wild (three-goal) first period. Obviously a lot of emotion, the building’s into it, and then we kind of settled into our game.”

That game has changed dramatically over the last month. The Sabres have an eight-game point streak (5-0-3). They’re 9-3-3 in their last 15 outings. They have six one-goal victories during their most significant stretch in years.

The Sabres often wilted late in close contests earlier in the season. Now they’re racing back or grinding out tight wins.

Jeanneret, the legendary play-by-play man who’s in his 51st and final season, watched the final moments of Friday’s game in the tunnel next to the bench.

After the horn sounded and the Sabres saluted the first sellout crowd since Feb. 16, 2020, winger Alex Tuch said someone yelled to “grab RJ.”

Tuch, a lifelong Sabres fan from Baldwinsville, helped escort Jeanneret on the ice with center Cody Eakin as the crowd roared and players tapped their sticks. Then the entire team posed for a photo with Jeanneret.

“It was something that kind of just heat of the moment happened,” Tuch said. “I think it worked out perfectly, the entire team with the saluting of the sticks and all the fans and stuff. It was emotional. It was a lot of fun. It was unbelievable.”

The picture might live on as one of the most iconic in franchise history.

“I was kind of hoping they use that as our team picture this year,” Okposo said. “That was a neat one, just very impromptu and a special moment for all of us to have.”

Tuch said: “It was a very emotional game for us and being a Sabres fan since I was three years old, it meant a lot to me to see someone who really propelled my love for the game to be honored in that way. It was just a phenomenal night in general and it was great that we got to win, but afterwards just the applause and the gratitude that everyone showed him was phenomenal.”

Following the game, Jeanneret joined the Sabres in the dressing room and shared some words. Then Okposo presented him with a “player of the game” sword.

He added: “That was a special night for the people of Buffalo and they’re going to be talking about that one, that they were at that game, for a long time.”

A moment in Sabres history we won’t soon forget.#ThankYouRJ pic.twitter.com/YHOJu1haHV