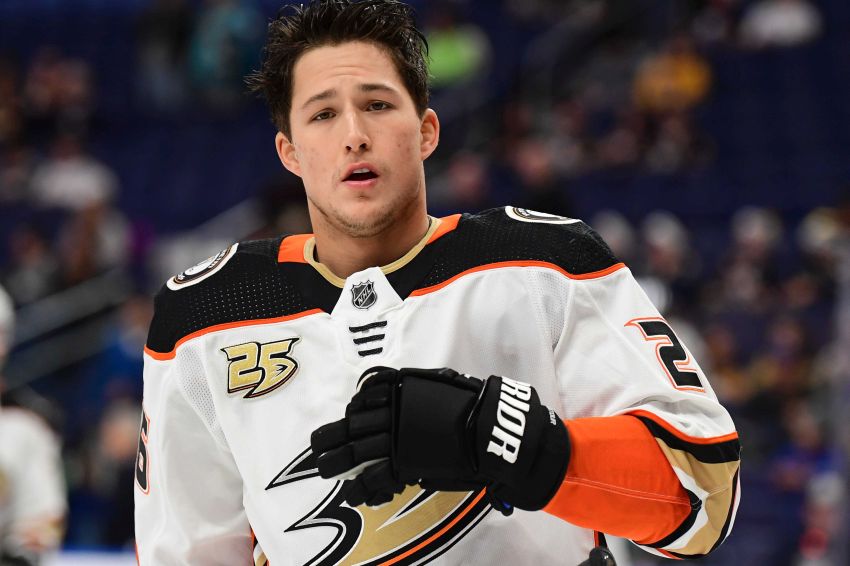 BUFFALO – Since Brandon Montour spent three and a half seasons in California playing for the Anaheim Ducks and their AHL affiliate in San Diego, the Sabres newcomer wasn’t exactly prepared for the harsh northeastern winter.

So on Wednesday, his first day in Buffalo, the defenseman spent part of his day off at a local mall purchasing some items to help him endure the elements.

After Montour returned to his snow-covered rental car, he tweeted a photo of a brush and the clean windshield with the words, “Oh boy! Have to start getting back in the swing of things!”

“It was nice to see,” Montour said of the snow.

Montour, who’s from Brantford, Ont., said his girlfriend also grabbed some items from his place in California and was bringing them to Buffalo on Thursday.

“I’m a little more prepared after today,” Montour said Thursday inside KeyBank Center, where he will make his home debut tonight against the Pittsburgh Penguins.

The affable Montour, 24, has experienced a whirlwind few days after the Sabres acquired him Sunday, a day before the trade deadline.

Montour left the Ducks in Vancouver, flew across Canada and met the Sabres in Toronto shortly before Monday’s 5-3 loss to the Maple Leafs, a game he sat out. He made his Sabres debut in Tuesday’s 5-2 defeat in Philadelphia, skating 18 minutes, 11 seconds against the Flyers.

Montour finally practiced with the Sabres on Thursday.

Despite all the chaos that accompanies a trade, Montour joked the toughest part has been getting used to the roller blade attachments many Sabres use to wheel from the dressing room in KeyBank Center over to Harborcenter.

So far, he feels he has transitioned smoothly to his new team.

Sabres coach Phil Housley said: “I just really like his attitude. He’s got a smile on his face, he loves coming to the rink, he enjoys playing the game. I just love the speed element to his game. (He’s) very tenacious, he attacks the game really well.”

There are, of course, friends Montour will miss. Montour said former Sabres goalie Ryan Miller, who’s in his second season with the Ducks, talked to him shortly after the deal.

“It’s tough, because I’ve had the relationship with Ryan, he’s a great guy and he’s an older guy who expects a lot and knows what it’s all about,” Montour said. “He was here for a number of years and said if I have any questions or anything for him to make it easier in my adjustment, he’s there for me.”

Seeing Montour leave was probably tough for some of his ex-teammates. As a right-handed, puck-moving defenseman, Montour seemed like a building block for the Ducks, who have hit rock bottom this season.

“It’s one of those things where I think there were mixed emotions, just because those guys might have thought me leaving was maybe not the right thing,” Montour said. “But it happens.”

There was a belief adding Montour could ignite the Sabres, who have struggled for almost three months following their 10-game winning streak. Instead, they’ve fallen further out of the playoff race.

Still, Montour said he feels “a lot of buzz” around the Sabres.

“You can see how much talent this group has,” Montour said. “I played one game, had a practice today and you could see the excitement. The guys are very outgoing and have a positive attitude. That’s huge for me to come in here and kind of build off what they’re doing here.”

After playing beside Marco Scandella on Tuesday, Montour practiced with Matt Hunwick on Thursday. Scandella is day-to-day with a lower-body injury, Housley said.

“Tremendous skater,” Hunwick said of Montour. “I think there’s certain plays where you can be a little bit more aggressive because his skating is so good.”

Oh boy! Have to start getting back in the swing of things! 😂 pic.twitter.com/7FXsh9TsBE