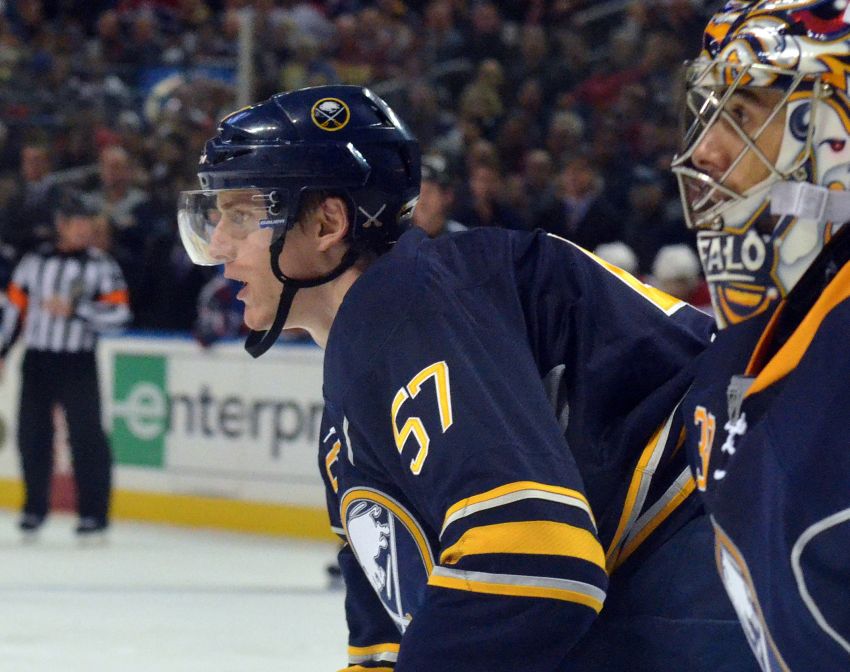 “He’s on a really good path right now,” Rolston said last week inside the First Niagara Center, reiterating comments he made throughout the season.

Of course, if Rolston, who shed his interim tag last week, wants to succeed as the franchise’s 16th coach, he needs Myers performing like the elite defender from his dynamic 2009-10 rookie season.

Myers’ stunning regression into a non-factor most nights contributed heavily to the Sabres’ recent failures and Lindy Ruff’s Feb. 20 dismissal as coach.

His value to the Sabres has decreased dramatically. They went 7-2-0 without him and 14-19-6 with him in the lineup this season. He had three goals, eight points and a minus-8 rating.

In the first season of a seven-year, $38.5 million contract, Myers bombed, showing up to training camp out of shape before getting scratched twice under Ruff.

The 23-year-old settled down a bit after returning, but he still generated little offense – something Rolston told him not to worry about – and struggled defensively at times before a broken bone in his leg ended his season on April 11.

Through it all, Rolston kept playing Myers big minutes and insisting the youngster was doing the right things and would keep improving.

“I think he understands where he needs to go and the growth he needs to have here, especially in the summer to get himself prepared for being an elite defenseman and one of the best defensemen in this league, which he’s been before, we know he can be next year,” Rolston said.

“But a lot of that’s going to come in the preparation and his growth over the summer, just to continue to obviously, one, work on his body, and then, two, just make sure he’s just simplifying things and playing within himself. And when that happens, he’s going to be a dominant player for us next year.”

Myers earned his huge extension based on the dominance he showcased during his first two seasons. These days, however, some observers believe Myers, who received a $10 million bonus on July, has one of the NHL’s worst contracts.

“I’m not big on regrets,” Regier said late last month. “Do you learn something from that? Absolutely. Do I think it is good to give 23-year-olds that kind of money? In most cases, no, I don’t think it’s good. Sometimes it’s unavoidable given 27-year-old unrestricted free agency. …

“But … I think you have to make sure you have to do everything you can to keep players fairly motivated. And in fairness to 23-year-olds, their intentions are very honorable. But in my view, it does impact and influence their ability to stay highly motivated. And did I meet with him and address (his conditioning)? Yes.”