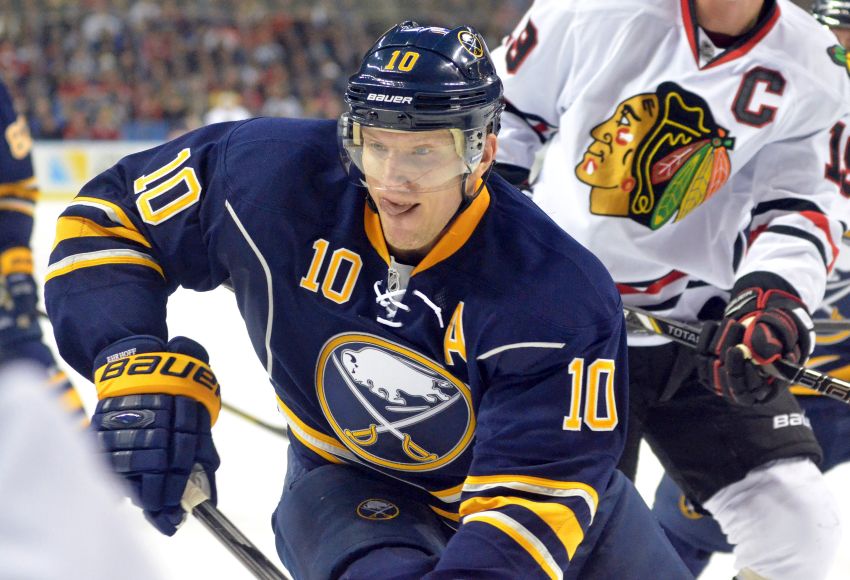 “That was kind of my expectation,” Ehrhoff said Saturday prior to the Penguins’ 5-0 win inside the Consol Energy Center, “but it didn’t end up that way.”

On June 29, the Sabres used their second compliance buyout to eat the final seven seasons of Ehrhoff’s 10-year contract. The German was shocked.

The 32-year-old joined the Sabres in 2011 expected to be a final piece in the Stanley Cup puzzle. He departed months after they finished dead last.

Ehrhoff signed a one-year, $4 million contract with the powerhouse Penguins on July 1.

The slick Ehrhoff appeared disenchanted with the Sabres’ sorry state late in his three-year run. Clearly, he wanted to leave.

Ehrhoff has blended in nicely on the Penguins’ star-studded roster, skating more than 21 minutes a game. He started Saturday’s tilt with three assists and a plus-6 rating in nine games.

“Obviously, in the summer we were looking for a player to add depth to our team, a top-four guy, and he’s proven to be that.”

It’s easier to adapt with less pressure. Ehrhoff’s the Penguins’ third or fourth defenseman. Despite his heavy shot, Johnston uses him on the second power-play unit.

“I think we’ve probably been spoiled with a lot of D back there that can do that,” Penguins superstar Sidney Crosby. “He’s fit right in. That’s the way he likes to play, he likes to join the rush and move it.”

The Sabres have to pay Ehrhoff two-thirds of the $18 million left of his $40 million deal. They couldn’t trade him because they faced a huge cap recapture penalty if he retired early.

Ehrhoff essentially bet on himself by signing a short contract. If he plays well, showcases his old Vancouver form, he could earn another lucrative long-term deal.

Before Buffalo, he thrived playing for some talented Canucks teams, averaging 14 goals and 47 points over a two-year stretch.

“I’m not too concerned with what’s beyond this year,” Ehrhoff said.

Ehrhoff mostly struggled with the Sabres, only looking like No. 1 defenseman for short stretches. The team has been just as bad this season, perhaps even worse, without Ehrhoff eating up minutes.

“I feel for the guys,” Ehrhoff said. “It’s tough to see. You don’t want to see a team struggle like that. That’s just part of the game.”

“That’s why we have a free country,” he said. “Sometimes contracts hold you to certain places. If you don’t want to be somewhere, I think the best thing is asked to be moved.”

The Sabres host the Detroit Red Wings tonight, the first of four home games this week.

Notes: Struggling Sabres forward Cody Hodgson, a touchy subject for Nolan, was moved from the fourth line to center Chris Stewart and Marcus Foligno. Hodgson has mostly played wing this season. “We want him to play the way he’s capable of playing,” Nolan said. “So far, he hasn’t done it. We just got to get better.” … The Sabres made one lineup change Saturday, inserting forward Brian Flynn for Sam Reinhart, who was returned to junior Friday. Meanwhile, defenseman Tyson Strachan replaced Andrej Meszaros for the second straight game. The Sabres also scratched defenseman Nikita Zadorov. … Crosby’s first-period assist extended his point streak against the Sabres to 18 games, his longest current streak.