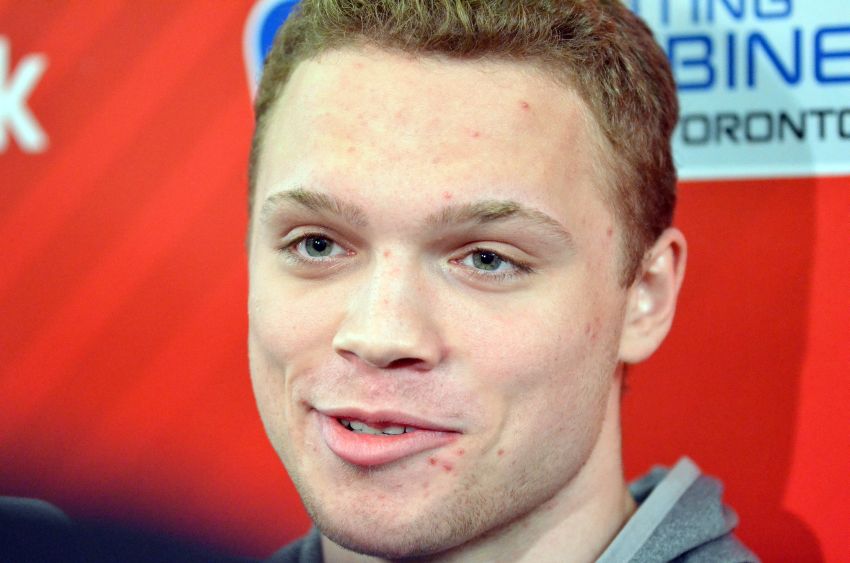 MISSISSAUGA, Ont. – The highlight has more than 100,000 hits on Youtube.com. After all, how many times do you see a perfect, between-the-legs saucer pass like the one Max Domi pulled off at last month’s Memorial Cup?

“To be honest with you, it was lucky,” the forward said about the nifty dish, which London Knights teammate Bo Horvath converted for a goal, earlier this month at the NHL Scouting Combine. “I don’t know if I could do it again.”

Domi, who compiled 50 goals and 119 points in 85 total games in 2012-13, shouldn’t worry, though. The 18-year-old, the son of former NHL enforcer Tie Domi, has plenty of other slick moves in his repertoire.

Head-turning skills, along with some of his father’s legendary tenacity, earned the Ontario Hockey League star a No. 19 ranking among North American skaters for Sunday’s NHL Entry Draft.

“If I was playing on a line with him, I think I could probably score 25 goals, put my stick on the ice and go stand in front of the net because he’s going to get you the puck.”

Here’s more on the 5-foot-9 Domi, who could be available when the Buffalo Sabres pick at Nos. 8 and 16:

Domi on his father, who accumulated 3,515 penalty minutes in 1,020 NHL games: “Obviously, you guys don’t realize how good of a hockey player he was, how hard he worked. He played 17 years in the NHL. I mean, he’s a pretty special dude. Obviously, I take from the positive stuff he did, whether that’s working out every day or being a good teammate.”

Edwards on the similarities between the two: “(He possesses) his father’s competitiveness. No, he’s not a fighter. But certainly he comes to play every single night. He’s not afraid to take a hit. He delivered a hit in the Memorial Cup.”

Domi on living with diabetes: “It’s part of who I am, obviously. I’ve learned to deal with it. The help of my teammates and the medical staff in London has made it pretty easy, obviously. Moving away from home at the age of 16 isn’t easy. It means a lot of have those guys.”