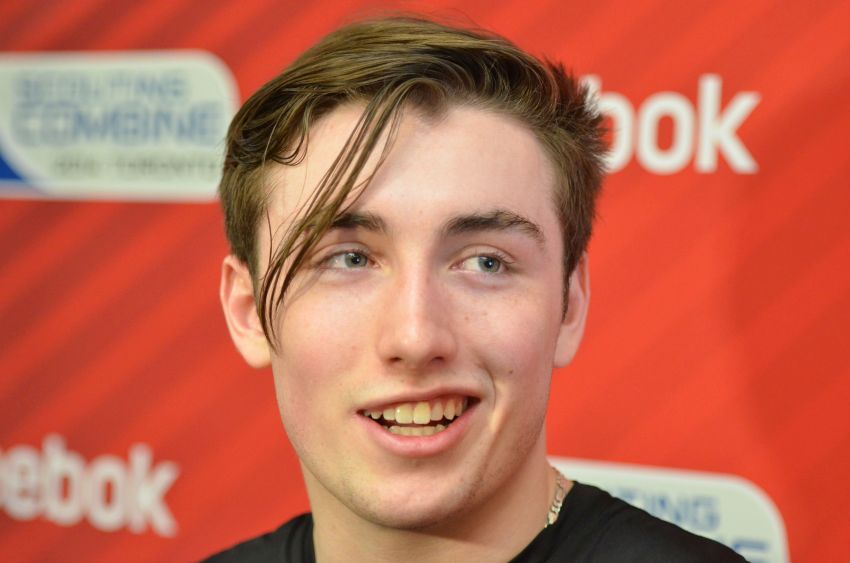 MISSISSAUGA, Ont. – No one wanted Donald Audette. It was June 17, 1989, and every team kept passing on the diminutive scorer at the NHL Entry Draft in Bloomington, Minn.

Audette, fresh off a monster 76-goal, 161-point junior season, finally lost it as the day dragged on.

“He was throwing chairs in the back of the rink,” Audette’s son, Daniel, said Saturday at the NHL Scouting Combine inside the Toronto International Centre. “He really wanted to get drafted, I guess.”

The Buffalo Sabres eventually grabbed Audette in the ninth round, 183rd overall. The 5-foot-8 winger was a steal, scoring 260 goals and 509 points in 735 NHL games.

Daniel Audette, who’s his father’s height, likely won’t have to wait long to hear his name called later this month at the draft in Philadelphia. The playmaking center, the 75th rated prospect among North American skaters, could go as high as the second or third round.

“Obviously, I want to have a career like my dad,” the 18-year-old said. “He had a really good career and a long one, too. I’m not the same type of player as my dad. I think he was more of a scorer. I’m more of a passer. I’m my own player.”

Here’s more on Audette, who said he didn’t meet with the Sabres at the combine.

Dan Marr, the director of NHL Central Scouting, on Audette: “He’s got good offensive hockey sense … very good passer. His strength is as a playmaker. He doesn’t have the size to win physical battles, but I wouldn’t say he shies away from anything.”

Audette on his father overcoming adversity: “Obviously, he wasn’t the biggest guy, and back then size was really important. (It) still is today but less. He was motivated and worked harder than anyone else, and that’s why, I guess, he had a long career like that.”

On what he remembers about his father’s career, which ended in 2004: “What I remember most is it just looks like an amazing lifestyle, just something I wanted to do all my life. When I was in the hockey room with my dad, seeing all the guys together just seemed like a lot of fun.”

On his Buffalo memories: “I remember going to Sabres games a bit, watching my dad play. Good memories back then.”

On what his father told him about the draft process: “He told me to have no regrets after the draft season. So that’s what I focused on.”