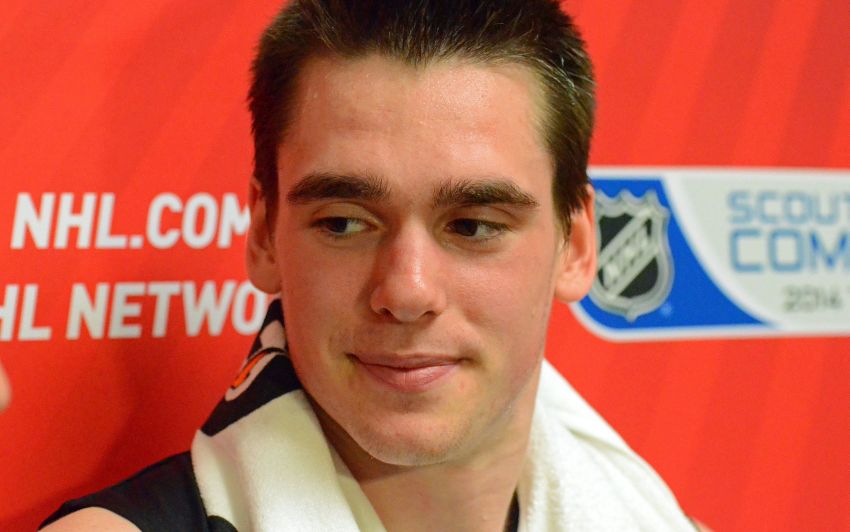 MISSISSAUGA, Ont. – As the child of an NHL star, Dominic Turgeon feels like he was “born into hockey.” He loved tagging along to the rink with his father, former Buffalo Sabres center Pierre Turgeon, the No. 1 overall pick in 1987.

“I was always around the guys,” Turgeon said last month at the NHL Scouting Combine inside the Toronto International Centre. “I always went out to skate with them, and to me, that always meant the world to me.”

So Turgeon decided he wanted hockey to be his career.

“I guess at that very young age I promised myself that’s what I want to do with my life,” said Turgeon, a center the last two seasons with the Western Hockey League’s Portland Winterhawks. “I had passion for the sport and one day I would get here.”

Turgeon, the 97th rated prospect among North American skaters for the upcoming NHL Entry Draft, is getting closer to his goal. He should be selected later this month in Philadelphia.

He calls himself a “two-way forward.”

“I can produce offense,” he said, “but I’m going to be a very strong defensive player.”

Here’s more on Turgeon, who spent most of his childhood in Denver and didn’t talk to the Sabres at the combine.

Dan Marr, the director of NHL Central Scouting, on the younger Turgeon: “His skating was a little heavy, but it improved significantly this year.”

Marr on if Dominic plays like Pierre: “A lot of players you can say you see some things. But I can see the facial resemblance. But as players I think they are different.”

Dominic on if he plays like his father, who’s also 6-foot-1: “I do. He was a big body, too. He loves to protect the puck down low. That’s what I do all the time in the offensive zone, really use my body to my advantage and try to get the puck to the net.”

On the pressure of having a famous father: “Maybe a little pressure. But to be honest, to me, I don’t really feel that pressure. I’m just trying to play the way I play and be myself.”

On what his father told him about the draft process: “He’s told me it’s a lifetime experience, you only experience it once in your life. It’s a big thing.”