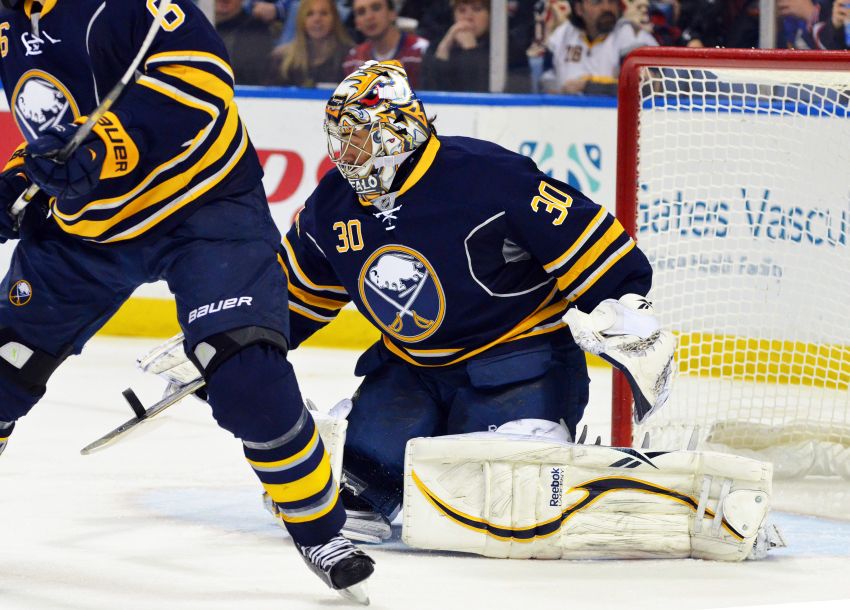 PITTSBURGH – The thinking went like this: Sabres goalie Ryan Miller, heckled during an ugly home outing Friday, wouldn’t play in Buffalo again this season. No way. The Sabres couldn’t risk having the face of their franchise jeered again.

But the Sabres turned to Miller again Tuesday inside Consol Energy Center, and the former Vezina Trophy winner dazzled in his 499th NHL appearance, stopping 40 shots in the Sabres’ 4-2 victory over the mighty Penguins.

Now, fresh off a dynamic effort, can the Sabres really deny Miller the nod in this Friday’s season finale at the First Niagara Center, a game many believe could be his last with Buffalo?

Does Miller want to play?

Miller then walked off.

The 32-year-old hadn’t played since getting yanked from an 8-4 home loss to the New York Rangers, a game he sarcastically saluted the crowd in between two Bronx cheers. He then voiced his displeasure after the game.

“Just trying to bounce back, keep it the same as always,” Miller said.

With the game tied at 2 and 6:39 left, Miller’s quick glove stymied Beau Bennett on a two-on-one break.

Ott then scored the winner with 2:24 left, batting Mark Pysyk’s rebound out of the air.

Officials reviewed the call for a high stick.

“It was nice to definitely get a break,” Ott said. “I thought we didn’t get a break all game from the way we were playing. … I looked on the replay and it was close. It could’ve gone either way.”

Incredibly, the slick Penguins, the Eastern Conference’s runaway leader, are 14-2 in their last 16 home games. The 11th-place Sabres have dealt them both defeats. They also triumphed here 4-1 on April 2.

The Penguins are 22-3 in their last 25 games. Besides the Sabres, only the Rangers have beaten them.

“If you look at our whole season, really, against the top teams we’ve played good hockey,” said Sabres winger Thomas Vanek, who had two goals and three points. “Against … teams like Florida and Tampa we struggled and couldn’t get wins. I think that’s our season right there.”

Ott added: “It’s frustrating at times. We’ve had a lot of ups and downs this season. But consistency’s a main factor. There’s never an issue of if we can beat the best team in the league. I think the parity throughout the league is so close now.”

Tuesday’s tilt was close throughout.

Vanek opened the scoring 12:49 into the game. Chris Kunitz tied it 20 seconds later, though, beating Miller from the left circle, a shot he probably should’ve caught.

“It hit me right in the thumb,” Miller said.

Miller, who called the win “a little bit empty,” kept thwarting the Penguins in close before the standing-room only crowd of 18,630 fans.

“They create havoc around the net,” Miller said.

“Their defenseman’s stuck actually hit their goalie’s pad and twisted him,” interim Sabres coach Ron Rolston said. “And plus he was outside the blue (crease).”

Vanek added: “I know I touched him a little bit. But at the same time, I thought he came out to me, too. Tough call.”

The Sabres, who had no power plays, killed a big penalty to start the third period.

Jochen Hecht put the Sabres up at 6:11, capitalizing after Vanek outmuscled Bennett near the boards.

Then Ott, who returned from a 10-minute misconduct earlier in the period, scored before Vanek’s empty-net goal sealed it. Vanek has 20 scores for the eighth straight season.

The game was rescheduled from Saturday so the Penguins could play in Boston after the city went into lockdown Friday.