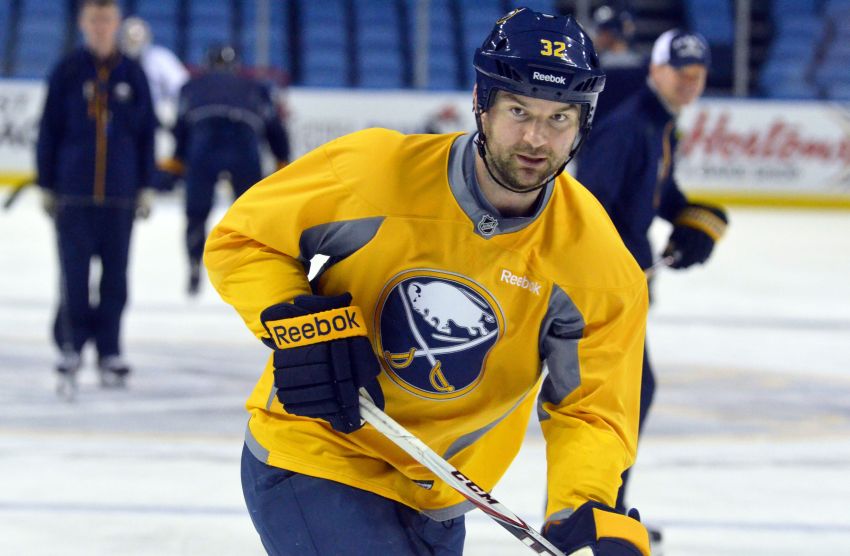 John Scott has the puck around the net. The hulking Sabres tough guy just might score.

Scott’s second NHL goal would be celebrated wildly, generate some cheer during an otherwise glum season.

The fans want to see this badly.

“I want it just as bad,” Scott said Friday. “I can tell it’s kind of an anticipation happening. Hopefully, it happens. If not now, then in the next few days. It’s coming.”

Scott has one game left this season, Friday’s finale against the New York Islanders.

One hundred forty-six games and 1,257 days have passed since Scott scored his first and only NHL goal.

“Just poked it in,” Scott said. “We were down two goals so I just cheated a little bit.”

Scott has more fights this season (six) than career points (five). He hasn’t even recorded an assist since Dec. 16, 2011, a 54-game stretch.

But these days, a Scott goal almost feels imminent.

Not only is Scott playing the wing exclusively this season, he also started earning a regular shift recently. The 30-year-old has skated at least seven minutes his last nine appearances, including a season-high 11 minutes in last Friday’s 8-4 loss to the New York Rangers.

Talented linemates – he’s skating with center Marcus Foligno and Nathan Gerbe or Drew Stafford – have been generating chances for Scott.

“Oh my God, yeah,” Scott said when asked if he felt close to scoring. “We’ve had a lot of chances in the last week. We’ve come close a few times. Playing with guys like that, you’re going to get on the score sheet once in a while. So it’s coming. Before the end of the year I’ll get one, for sure.”

Stafford said he’s “been trying for a while” to get Scott a goal.

“Everyone in here has been trying,” Stafford said.

Of course, Scott, 6-foot-8 and 270 pounds, is still the Sabres’ resident scrapper. But it’s nice to earn a break from fighting. He hasn’t fought once during this recent stretch.

“It’s been good to kind of play regular and try to contribute in other ways (instead of) just going out there and fighting every game,” Scott said. “So I think it’s been a nice change of pace. I think I’ve been doing well.”

Scott said teams think, “Oh, he’s a fighter, that’s all we got him for,” when they sign him. It takes time to build up trust and realize he can do a little bit more than fight, he said.

“I’m not saying I’m a fantastic hockey player or anything,” Scott said, “but I got a side that can contribute in other ways.”

Scott, who signed a one-year deal in July, believes he gets “pigeonholed” by fighting.

“I think I’m a decent player,” he said. “I don’t think I’m a hindrance or kind of a weight out there to the guys. I think I can hold my own and contribute. I think I’m a better player than a lot of people give me credit for.”

Scott, a defenseman until last season, is still trying to find his niche up front. He once developed from an average NCAA player into an NHL defender capable of playing 10 minutes some nights.

This is the next challenge.

Naturally, Scott’s size and toughness creates space. He’s unafraid to go to the net and get dirty. He wants to get better at controlling the puck, though.

Teammates agree he can contribute. Ask them about Scott, and they tell you he’s a better player than most people realize.

“(It’s) pretty much impossible to take the puck from him,” Stafford said. “When he turns his back on you, that’s something I know he’s been trying to work on and trying put in his game.”

Foligno said the Sabres “need him in the lineup.”

“He not only brings toughness, but he’s a team guy,” Foligno said about Scott. “At the same time, he does his job. He gets pucks out. He can shoot the puck. He’s smart with it. He knows how to create plays.”

In order to stay in the big leagues, Scott knows he must do more than throw punches.

Notes: Forward Jochen Hecht, who battled concussions last season, is the Sabres’ Masterton Trophy nominee for his dedication to hockey. … Thomas Vanek’s second goal in Tuesday’s 4-2 win in Pittsburgh was the winger’s 250th NHL score. The Austrian ranks sixth on the team’s all-time goals list. … The Sabres had Wednesday off.