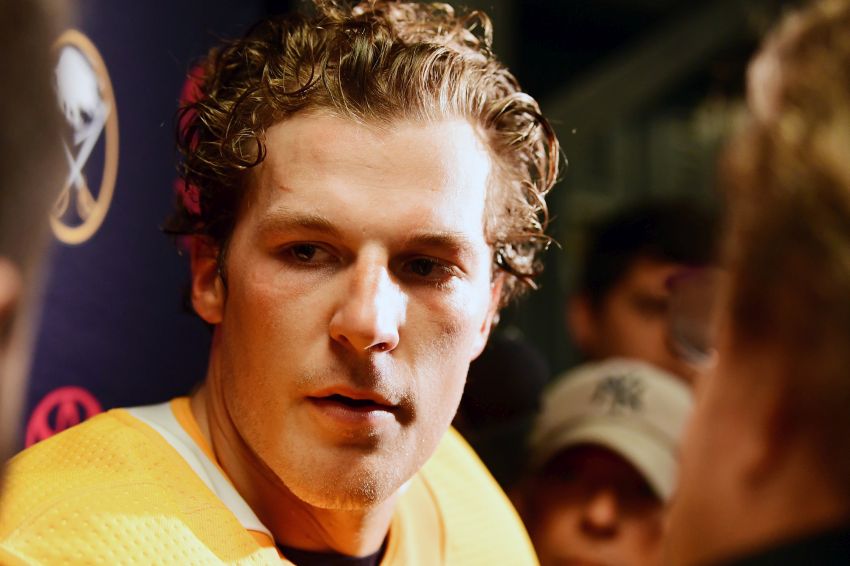 “We feel that that’s a strong group for the ice,” Krueger said following today’s practice inside KeyBank Center.

“I feel the maturity and the ability to lead from the position,” Krueger said of Eichel, “and our room’s filled with people that will be leading and helping us lead.”

How did Okposo, a proud veteran, handle the news he had lost his letter?

“I communicated with everybody quite honestly and openly, and nobody was upset,” Krueger said. “They were open to honest discussion. The only thing I can say is continue to do what you’re doing, continue to lead the way they are. Those are really good people leading the way in there, and they will continue to do that.”

Johansson, 28, signed a two-year $9 million contract with the Sabres on July 6. The Swede has played 588 games since coming to the NHL in 2010-11. Krueger has already installed him as the Sabres’ second-line center.

Meanwhile, the gritty and versatile McCabe, 25, has played 274 games since joining the Sabres late in 2013-14.

The Sabres open their 50th anniversary season Thursday on the road against the Pittsburgh Penguins.

Fourteen former Sabres captains will participate in a pregame ceremony before Saturday’s home opener against the New Jersey Devils, the team announced today.

Four of them – Audette, Campbell, Hecht and Lydman – only served brief tenures as captain.

Krueger on his coaching style: “I believe every game has its own story line and own way in trying to get to a victory. You need to feel what the opposition is doing and you need to be flexible, whether it’s possibly adjusting your rotations or adjusting even the lines, because of what’s going on within the game. So I’m a coach that likes to live the game.”

According to an injury report the Sabres released Wednesday, defenseman Brandon Montour (hand) will be sidelined another three to four weeks. Meanwhile, Bogosian (hip) and goalie prospect Ukko-Pekka Luukkonen (hip) are out indefinitely.